Behind the Scenes at NNT: Celebration by Harold Pinter 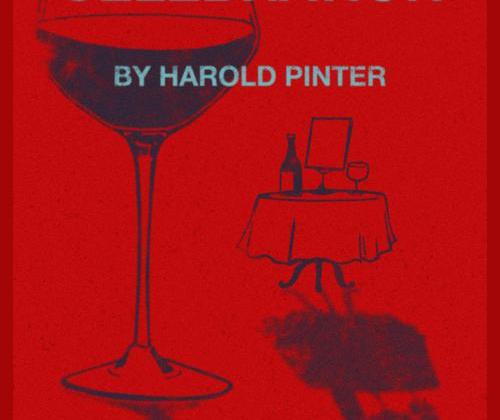 Ahead of Nottingham New Theatre’s first spring in-house production, Daisy caught up with the cast and production team of Harold Pinter’s Celebration.

Arriving early for our interview, I caught the last lines of a run through of NNT’s latest production, Harold Pinter’s ‘Celebration’. The auditorium buzzed with the excitement of a new set and the looming show week. I met with the Director of the production, Bill, along with several members of the cast and crew to discuss their play.

D: Could you give us a quick summary of the play?

Bill: The play revolves around two sets of diners, three married couples. Two of them are two brothers married to two sisters, so there’s a weird dynamic going on there.

There’s another independent couple sat on their own and we get to listen in on their debaucherous lives and the terrible things that they say to each other. The conversation twists and turns from them having normal chat to spilling juicy details about their lives.

“This is by far Pinter’s work that is most full of life. It’s really vivid and has a zest for life”

D: Was it challenging to put the play together in just two weeks?

Jake: I think it’s been relatively stress free! (They all laugh awkwardly) From an actor’s standpoint, it’s been fine. We all seem to know what we are doing, which is always a bonus.

Rohan: I think we’ve all taken to our characters and understood our characters fairly quickly, which has made the whole process a lot easier for us, as actors, I guess.

Bill: Yeah, as soon as we got into the rehearsal rooms you [referring to the cast] were all so on it, so it’s been relatively stress free really, in terms of directing you guys because you’ve been a dream.

“we are kickstarting the season in a really nice, warm, friendly way.”

Lily: We had our first run-through after about a week, so just being able to run the whole show several times every rehearsal means we were able to put together the show fairly quickly.

Rachel: Yeah, it’s a short show, so the rehearsal process kind of matched the performance in that it’s very much a burst of energy rather than a long, lingering play.

“if you go into it with the knowledge that these are the last words that he put down on paper, they really leave a bit of a chill.”

Jake: I almost vomited from downing a schloer!

Rohan: Rachel asked me if anyone has ever sucked my weenus.

Rohan: I think it’s equally as bad either way, to be honest…

Rachel: I’d like the record to show that the weenus is part of your elbow. I wasn’t being inappropriate!

“it’s hilarious to watch terrible people pretend to be normal”

D: (To the crew) If you could play any character, who would it be?

Rachel: Yeah you would… you LOVE Suki.

Lily: Whenever Bill does Suki’s voice, I think it’s just the best part of rehearsals.

Libby: I’d probably play Lambert because it would be so funny to embody a Tom Hardy-esque character.

D: Why did you choose Celebration over the other Pinter plays?

Bill: This is by far Pinter’s work that is most full of life. It’s really vivid and has a zest for life in such a strange way… it’s making commentary on where we are in society right now but at the same time has this love for everything that makes us a little bit debaucherous and twisted.

Pinter can be a really big challenge and this one is just bursting at the seams with so many funny moments that it just really caught my attention.

And it’s his last play! There’s a few moments in it where, if you go into it with the knowledge that these are the last words that he put down on paper, they really leave a bit of a chill.

D: As a cast, what are you most excited about?

Lily: I was going to say Savera’s curry!

Rohan: I think we are at a stage now where it will just be nice to perform to an audience. We are naturally quite a funny bunch of people and I think that we need to feed off the audience’s laughter. I think that’s the next stage.

Bill: Yeah, the rehearsal room has become a bit of an echo chamber… We’ve heard the jokes so many times, it just starts to feel like it’s bouncing off a brick wall. I will really really look forward to having people there.

Rachel: Also being in costume, having proper props, enough Schloer to go around for everyone, not having to tip the glasses back into the bottle after each rehearsal! I think that will make it all feel quite real, which will be fun.

D: Can you sum up in one sentence why people should come and see the play?

Jake: Because it’s hilarious to watch terrible people pretend to be normal.

Lily: That’s such a good line!

Rachel: You’ve thought about that one before, haven’t you…

Rohan: Practised it in the mirror!

Bill: I don’t think I can do it any better than that. That really gets the entire crux of the play.

Rohan: I would add that NNT doesn’t put on enough comedies, so it’s a breath of fresh air, especially with the rest of the season being quite heavy. I think we are kickstarting the season in a really nice, warm, friendly way.

Rachel: Will, Sky, Libby and Nathaniel [the production team] have all worked really hard. Especially making our lives, as actors, so much easier, telling us to show up and know where to be, without having to stress about it. That effort should always be commended.

A Salad From Deliveroo?