Behind the Scenes: Musicality’s Chicago production

Daisy goes behind the scenes with the cast and crew of Musicality’s Chicago to find out about their upcoming show.

D: What are you most excited about regarding putting on this show?

Rowena (Executive Producer): Yeah, I’m similar really. I think just getting into the theatre and going into that setting and actually thinking ‘This is it! It’s happened! We did it’- that’s going to be a great feeling.

Katie (playing Velma Kelly): Mine’s just doing the whole thing in costume, with lights, on stage and to an audience.

For so long we have actually had the atmosphere of being in a theatre and it’s completely different performing it in front of 200/300 people than to just the team. As much as the whole team are so supportive, it will be amazing to perform it to a whole audience as well.

“I think this will be a nice chance for people to be like […] ‘I know this song! I can sing along!'”

D: What’s been the funniest moment in rehearsals so far?

K: Oh- there’s actually too many! I think, if I may, it’s the amount of times Robin (Billy) has said ‘Rechisigs’ instead of ‘For Christ’s sake’ because it’s written wrong in the script.

A: There’s a funny moment in the Court Room scene when the ensemble are silent for most of the scene but have to stay focussed for occasional lines. They have two moments where they all have to say something in sync, one they stand up and say ‘Hallelujah’ and the second ‘Hooray!’. But when those two get confused… we had everyone stand up and sing ‘hallelujah’ and Paolo (Emcee) just goes ‘HOORAY!’, like really over the top. We laughed a lot at that.

D: (To Katie) What do you find the most challenging part of the show to perform?

K: So… There’s a song called ‘I Can’t Do It Alone’ and it’s a solo, practically just me on stage. And its full-on kicks, leaps, jumps while singing at the same time and it’s quite a hard song to sing just to begin with because it’s so fast.

To add that with chairs and things is hard because it’s just me! If it goes wrong and I panic, there’s no one else to go ‘it’s okay! Carry on!’ – I just have to say it to myself!

D: (To Rowena and Adrianna) If you could play a part in the show, regardless of gender/ ability, who would it be?

A: I mean, I’d obviously say Roxie just because she’s the biggest part but if I was to go a bit more niche, my favourite murderess is ‘Pop!’… so I’d probably pick that.

R: But also, I think I’d go with Katalin Helinski, who’s the Hungarian one, because I’ve never really done accent work before and that would be an interesting challenge. I have a history of ballet, so that would be fun.

K: She’s got the really cool rope trick as well!

R: Oh yeah that’s a fun scene with a little magic trick, but we’ll leave it as a surprise!

D: Do you feel the pressure of putting on such an iconic show that’s only left the West end recently?

(All look at each other worriedly and laugh)

R: I think that’s a yes! Yeah… there is that thing of knowing it’s got to be good because everyone loves it. But with that, we hope we get the interest of people love it then come and see it. If they know the songs, especially if they know people in the cast, it should be really exciting for people.

Before, we’ve done shows that are maybe less well known or more niche, so I think this will be a nice chance for people to be like ‘oh my god! I know this song! I can sing along!’

D: Don’t say that! Then people really will sing along!

“It’s a tale of seduction, fame and murder performed by an amazing cast, with an equally amazing band and it’s by UoN’s best student group of last year!”

K: I think it’s definitely more of a positive thing than a negative… And actually from people I’ve spoken to I think there’s a really equal balance between people who do know the show and people who don’t.

I think it’s quite nice for those who aren’t familiar with musical theatre who are just your friends, then you don’t have the pressure and they get to see you in it for the first time. 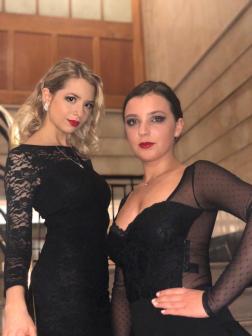 D: Could you each tell me your favourite line in the show, if it won’t spoil it!

K: I don’t think I can say mine! But there’s one by Amos that says ‘My exit music please!’ and nothing’s played and he just walks off, really sad. Obviously it’s funniest in context!

A: In the courtroom scene when Roxie is going ‘I can’t go on! I can’t go on’ and making a big scene to draw sympathy from the jury and then Billy goes ‘No, Roxie, you must tell them the truth.’ And she just goes ‘OK!’.

K: Oh and definitely Squish’s line, where she does ‘And then he ran into my knife’

Everyone: ‘And then he ran into my knife ten times!’

R: I think any of the murderess’ lines, to be fair.

“We want to make the audience leave the theatre smiling and thinking ‘I’m so glad I went to see that!’ and just be impressed with what the cast can do.”

D: What’s been your proudest moment of the process so far?

R: I think for me it was at the end of the callbacks when we finally looked at the whiteboard after that long weekend of auditions and thought ‘oh my god! We have a cast!’

K: The other day when we finished ‘All That Jazz’ and we actually managed to get the whole thing right. At the end I thought ‘we can do it! This is going to be fun!’

D: In one sentence each, tell me why everyone should come and see the show?

R: It’s a tale of seduction, fame and murder performed by an amazing cast, with an equally amazing band and it’s by UoN’s best student group of last year!

K: Because we’ve put in hours and hours of tireless, endless rehearsals. We want to make the audience leave the theatre smiling and thinking ‘I’m so glad I went to see that!’ and just be impressed with what the cast can do.

A: Everyone has worked really hard on this show. Everyone in the cast has really put in the time, outside and inside of rehearsals.

The band has been working really hard, all the people working back stage have had to come into rehearsals in their spare time and get the show ready to run and the team have also been at it for a really long time! We’re really excited to let everyone see what we’ve done.

K: AND there’s a whole load of Razzle Dazzle!

Make sure to head down to the Nottingham Arts Theatre on Thursday 13th – Saturday 15th February to catch this amazing cast in action!

Opening of Rainbow Crossing on Campus