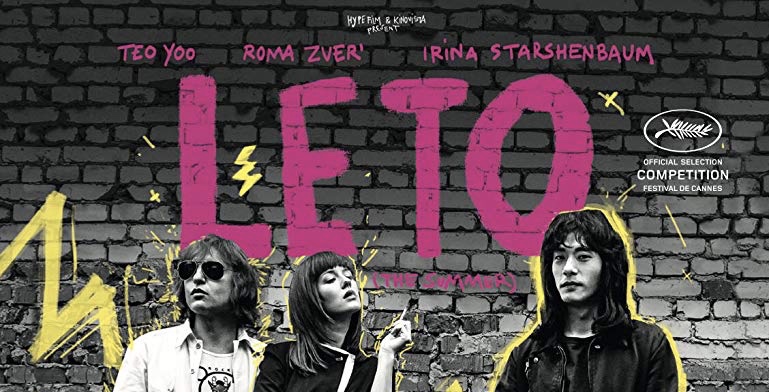 Leto (pronounced “lee-air-ta”) translates into ‘summer’ or ‘summertime’. It’s this choice of title that foreshadows what is an intrinsically reminiscent film. Based on the memoirs of Natalia Naumenko, Kirill Serebrennikov’s Leto invites the audience to 1980s Leningrad where, through Natalia’s eyes, we learn about the development of the city’s lively rock scene through the story of an aching love triangle.

“The sets are beautifully designed”

Leto is filmed almost entirely in black and white, with Serebrennikov keen to express the sparse, dull, and often monotonous life behind the iron curtain. The sets are beautifully designed. Beyond guitars, record players, and cigarettes, the characters navigate through a world void of excess possession. Seemingly incongruous props are given disproportionate screen time – an ivory white coffee cup and a bloated cherry-red tomato, for example, in two cases of sharp juxtaposition.

A staple for members of the rock scene at the time, Mike’s music and the life around it drifts across the city – inside communal flats, out onto rooftops and over the beach on the Gulf of Finland. The rustic and delicately romantic image of Russian rock life depicted by Serebrennikov has been critiqued as the stuff of mere fantasy, but the visual and thematic attractiveness of the film’s explored epoch can and should be enjoyed in its own right.

In an act of acknowledgement of the actions he has taken to dramatise and romanticise the lives of the Leningrad rock punks, Serebrennikov includes the character ‘The Sceptic’ (Aleksandr Kuznetsov), who occasionally floats into scenes to remind the audience that some events being portrayed never actually happened. I found this to be an unnecessary addition to the film. Any sensible audience appreciates the producer’s role in exaggerating certain events in the interest of entertainment, and although his visits were few and far between, The Sceptic definitely took something away from the scenes he was in.

In three scenes, energetic cartoon squiggles and shapes dance on the screen as members of the public sing along to various new-wave tunes. Although ostensibly strange, Serebrennikov seems to employ such a markedly unusual style to get across the childish excitability of the young and exuberant main characters on their way to musical fame.

Early in the film Mike is introduced to Viktor Tsoi (Teo Yoo). A little younger than Natalia, the wannabe rockstar is taken under Mike’s wing and proves to be an ambitious and charming accomplice. The two are often found poring over Mike’s favourite records in cramped, smoke-filled rooms. The remainder of the film explores Viktor’s rise to stardom and, crucially, his increasingly romantic relationship with Natalia.

Leto is a film that lacks a traditional story arc yet keeps the viewer interested through a number of unique cinematic techniques and rich characters. A memorable experience that I would recommend to those interested in atypical cinematography and Russian film.

Coronavirus – How Is the University Handling the Epidemic?