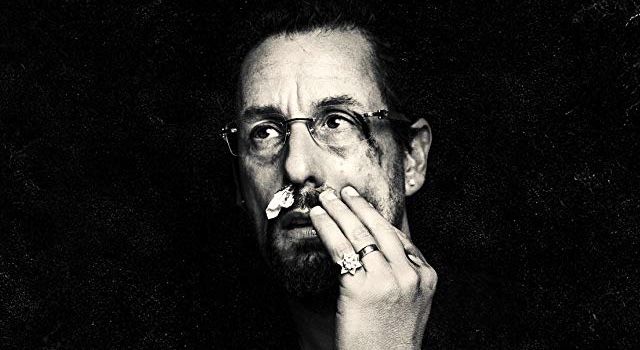 In 2012, jeweller and philandering gambling addict Howard Ratner (Adam Sandler) attempts to auction off a rare black opal whilst trying to evade loan sharks, recoup losses, and forestall the disintegration of his marriage.

In 2017, the Safdie Brothers shot to international fame with their crime-thriller Good Time, which some hailed as an instant classic of the genre due to its kineticism and portrayal of nauseating robberies as more grimy than glamorous. Now, they’ve followed it up with a film that is even stronger: keeping the frenetic pace and intense performances but within the framework of a more thematically rich story.

The cinematography is like the dizzying approach found in Good Time, sticking close to Howard for much of the runtime, occasionally lurching to keep up with him as he hurries around. At points though, the camera will pull back and scenes will take on an almost anthropological distance from the chaos being depicted. There are even feints to a more grandiose sort of filmmaking with an opening zooming into the titular gem that takes the viewer into a psychedelic journey into all sorts of beautiful shapes and colours. The Safdie’s interest in a grittier work become clear when the camera then gradually zooms out to reveal our protagonist’s insides as he undergoes a colonoscopy.

This opening seems significant as the film progresses, and the question is often posed: what is inside Howard Ratner? What makes him behave the way he does? The role is a godsend for Sandler, who has received much critical attention for his turn here even if the Oscars ultimately snubbed him and the entire film. It would be an oversimplification to say that Sandler has a reputation as a bad actor, as his turns in films such as Punch-Drunk Love and The Meyerowitz Stories display a notable level of skill and nuance. However, much of his career has been a lot less impressive (if not outright reviled) and it suggests itself that Sandler is perhaps a lazy actor.

“In the hands of a lesser performer Ratner would be an entirely loathsome creation, but Sandler makes him alternately magnetic and repulsive”

That’s a shame as when he applies himself, as he does here, he can be spellbinding. In the hands of a lesser performer Ratner would be an entirely loathsome creation, but Sandler makes him alternately magnetic and repulsive. An audience feels for him at his lows because he is so pitiable and can root for him at his highs because his enthusiasm is so infectious. Even those who have grown weary of the trend of morally dubious anti-heroic protagonists would be hard-pressed to not find something compelling in the way Sandler brings to life the self-destructive exploits of Ratner.

“The other characters are excellently cast and feel very realistic”

Whilst undeniably Sandler’s film, the other characters are excellently cast and feel very realistic as an assortment of people who suffer through their association with Ratner. Special praise should go to Lakeith Stanfield as Demany (Ratner’s aspirational employee), Idina Menzel as Dinah (Ratner’s soon-to-be-ex-wife), and Eric Bogosian as Arno (a loan shark who becomes somewhat sympathetic due to the sheer number of hoops Ratner has him jump through). The one character in the film whose feelings towards Ratner are possibly more positive than negative is his mistress Julia, played by Julia Fox in an assured and entertaining debut performance.

The film’s credentials as a 2012 period piece are solidified by the appearance of a few celebrities as themselves. The Weeknd features as an up-and-coming artist and unlikely rival to Ratner, and Kevin Garnett (then playing for the Boston Celtics basketball team) is the source of many of Ratner’s bets. The Weeknd’s appearance is essentially an entertaining cameo, but Garnett’s performance is more substantive and is quite compelling as his obsessions with the gem and with winning are nimbly compared with Ratner’s own.

If the film has one weakness it is that occasionally it veers into telling rather than showing: it is readily apparent that Ratner is an easily detestable person, there isn’t any need for the script to reiterate the already established human cost of his reckless actions. This is a minor point though, and Uncut Gems is an excellent addition to the filmography of the Safdie Brothers, and the catalogue of ‘Netflix Originals’ that grows ever better whenever Netflix manage to snap up distribution rights for such interesting films.

Opening of Rainbow Crossing on Campus