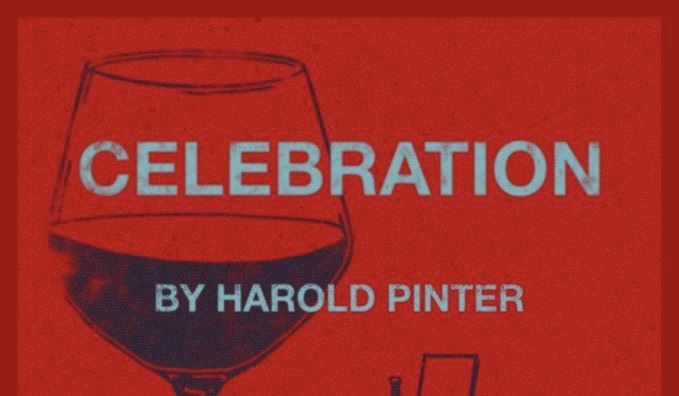 The Nottingham New Theatre’s production of Harold Pinter’s Celebration played last week. The play follows three couples across two tables in an east end restaurant. We get to be a fly on the wall, watching the truth about their scandalous lives unfold. NNT have taken on the challenge of Pinter’s last play with skill and spunk, making this an entertaining evening for all.

Being led into the auditorium by waiters, as if in a restaurant, is a nice touch from the director, Bill Hayes. However, the thrust staging of the play meant that where I was originally seated made many of the actors’ faces invisible to me from the side of the stage. I can see why this choice was made; it makes the experience feel intimate, which forces the audience to feel the stifling tension between the characters, but sightlines were an issue and I do not think I would have enjoyed the play nearly as much if I had not been able to see all the actor’s faces.

“Rakhit’s comedic timing and facial expressions are spot on”

Having moved seats, I was able to properly watch Rohan Rakhit’s performance as Russell, the socially awkward and eccentric banker, who is sitting at a table with his wife, Suki (played by Rachel Coussins). Rakhit’s comedic timing and facial expressions are spot on; his approach reminded me of Jim from Friday Night Dinner, an aura which matches this strange, enigmatic character perfectly. He exudes a stage presence that keeps the audience engaged the whole way through and his constant focus on keeping in character doesn’t waver even when the attention is taken away from him.

The cast’s complicity was to be admired; their shared energy was strong and rarely was there a moment where a line or action seemed disjointed and unnatural. This element was crucial to a comedy that relies so much on tension and awkwardness, a cast who are so in tune with each other was greatly appreciated.

Hayes’ and the cast’s attention to detail is immaculate. While Rose Edgeworth’s lighting design shifts the audience’s focus between the two tables, it is almost as interesting to watch the one that lay in darkness compared to the one that is lit. Whether it was Coussins applying red lipstick, or Jake Levy and Joe Butler playing two brothers arguing over cigarettes, the whole thing created this fantastic illusion of reality that was impossible to stop watching.

Levy, who plays the increasingly drunk Lambert, brings to life the disgusting, aggressive and nothing short of bizarre character with fervour. His awkwardly timed grunts and random outbursts of childlike anger are a highlight and received a deserved response from the audience.

Lily Bailes and Jessica Staplehurst (who play Julie and Prue, respectively) maintain an intense dynamic between the sisters and their husbands commendably. The two actresses bounce off each other in a way that really emanates the relationship between sisters, which can also be said for Levy and Butler. Coussins and Rakhit hold eye contact for uncomfortable lengths of time and somehow manage to refrain from laughter while delivering the mortifying lines; it is admirable. The same goes for Ollie Binns, whose interpretation of the waiter is appropriately monotonous and philosophical.

This play was clearly put together by a cast and crew who understand every inch of what Pinter was trying to achieve – this detail should not go unnoticed. The comedy is held not in the lines themselves but in their delivery, and this play could not have been pulled off by mediocre actors and directors. The style of the jokes rely so heavily on timing that they could easily be misjudged; however, Hayes’ attention to detail and the cast’s individual understanding of their characters make this challenging play seem effortless.

Overall, this was a well thought through production which really showcased the talent of its cast and creative team. It is not often that comedies are performed at NNT, but this production should show directors that they are equipped to perform such plays in a sophisticated way. To open the season with this sparky, hilarious piece may have been a risky move, but with that risk came great reward.

‘In a World Where You Can Be Anything, Be Kind’ – A Look at the Specifics of Caroline’s Law