The 10 best stars to have left EastEnders

When legend June Brown (who played Dot Cotton) announced recently that she was leaving Albert Square at age 93, many dedicated fans were deeply saddened. She’s been part of the soap’s furniture for so long, after all. It therefore seems like an appropriate time to analyse some of the best stars to have graced Walford over the years.

… it is safe to say that Peggy Mitchell was part of the most iconic EastEnders ‘duff duffs’.

Unquestionably the eternal matriarch of the square, Peggy Mitchell’s death will continue to stain the mind of viewers. After making a shock return to the soap in 2016, it was discovered that the character’s cancer had returned. Having refused to go through chemo, Peggy committed suicide with an overdose of pills that saw the end to a much-loved landlord and member of one of the most iconic families in the soap. Barbara Windsor played legend Peggy Mitchell on and off for 22 years on and is now sadly suffering from Alzheimer’s disease. Having been through a Queen Vic fire, numerous affairs, and experienced many pub brawls, including the infamous “you bitch, you cow” scene with Pat Butcher, it is safe to say that Peggy Mitchell was part of the most iconic EastEnders ‘duff duffs’.

Bradley Branning brought whit, charisma and romance to the square.

Whilst arguably less of a legend than Peggy Mitchell, Bradley Branning still very much deserves a spot on this list. Son of Max and grandson of icon Jim Branning, Bradley Branning brought whit, charisma and romance to the square. Often remembered for his troubled relationship with his father and relationship with his eventual wife Stacey Slater, the property salesman suffered a huge blow in the memorable 2007 Christmas day episode where the steamy affair between his father and wife was captured on camera during his wedding day by sister Lauren Branning. Reportedly 14.38 million viewers tuned in to watch Bradley’s world being torn apart, making the show the most watched television programme of 2007. This led to a huge fallout within the whole family but Bradley eventually rekindled his relationship with Stacey, leading to his ultimate downfall. As suspicion increased over who had murdered Archie Mitchell on Christmas Day 2009, Bradley eventually owned up to the murder in a bid to protect Stacey. Once DCI Marsden discovered this Bradley was hunted down, leading him to scale the Queen Vic’s roof where he subsequently fell and died.

With her family gathered around her it was clear to viewers how much of a glue she was to the younger members of the square.

Known for her iconic earrings and bright pink coat, mother figure Pat Butcher dominated the soap with her witty humour and resilient character. Often getting in to fights with her troubled stepdaughter Janine, Pat was loved by viewers for her ability to stand up to opposition. The role of Pat Butcher transformed Pam St Clement into a national treasure, giving her a memorable look that was hard to match up to. If anyone could make cheetah skin outfits fashionable it was going to be her. Her final departure from the show was shrouded in sadness as she was finally reunited with her son David in the final moments before cancer viciously defeated her. With her family gathered around her it was clear to viewers how much of a glue she was to the younger members of the square.

… the Mitchell sisters offered a new exciting, young dynamic to the show.

Whilst this is technically two characters, there is no way that I could separate loyal sisters Ronnie and Roxy on this list. Having first arrived on the soap back in 2007 to attend their cousin Phil’s wedding reception, the Mitchell sisters offered a new exciting, young dynamic to the show. After it was later discovered that their father was Archie Mitchell – who turned out to be one of the show’s most evil demons – both Ronnie and Roxy experienced lots of drama during their time at Walford. Some of their most memorable moments included owning the ‘R&R’ nightclub, discovering that Ronnie was abused by her father and chasing Sean Slater on the ice to take Roxy’s daughter – Amy – after a paternity test proved he was not the father. The tightknit sisters, despite their arguments, remained by each other’s sides throughout – tragically dying together in a hotel pool as Roxy suffered a heart attack and Ronnie’s dress got tangled in the pool. As viewers had become so connected to the loveable yet feisty characters, many threatened to boycott the soap after the sisters had drowned, arguing that their departure tarnished the soap’s reputation.

As well as being a close and supportive friend to Lisa Fowler, Melanie was also loved for her feisty character – often standing up to the likes of Phil Mitchell.

An icon of the soap for 21 years, Melanie’s departure left viewers utterly shocked. Following a car crash in which Melanie and Sharon both made it out safely, the former returned to her vehicle and on-going traffic, as she believed that she could see her recently deceased son. As well as being a close and supportive friend to Lisa Fowler, Melanie was also loved for her feisty character – often standing up to the likes of Phil Mitchell. This strong characterisation made her departure even more harrowing for viewers. 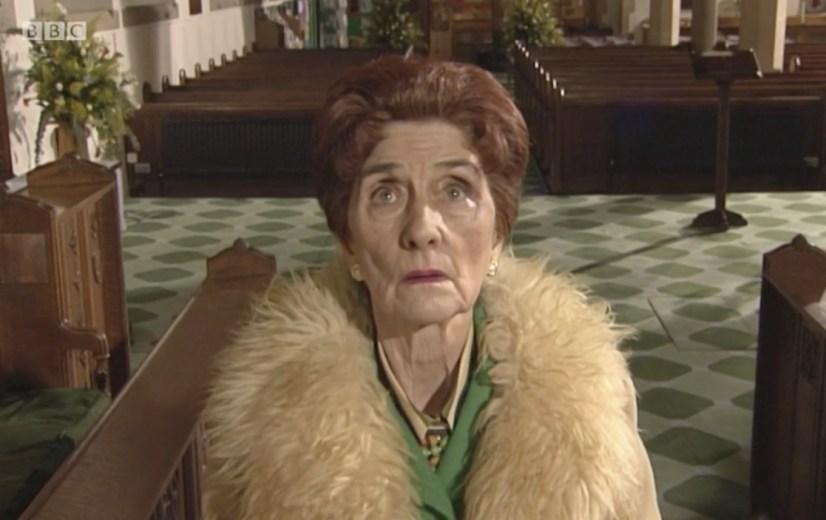 Carol was set for lots of drama in EastEnders from the start.

Carol Jackson’s departure, in my opinion, will always stay memorable due to its strange juxtaposition of comedy, defiance and emotion. Whilst she was initially expected to live with her son Robbie and daughter Bianca in Milton Keynes, viewers were left shocked once they saw her donning a leather jacket on a motorcycle in true mod style. Facing the unknown ahead, the only thing Jackson was certain of was that she wanted to leave Walford for good, having recently discovered that her brother Max was set for 20 years jail time over the murder of Lucy Beale. Being the mother of Bianca and Sonia as well as the grandmother of Whitney, Tiffany and Bex – to name a few – Carol was set for lots of drama in EastEnders from the start. Arguably some of her most memorable moments include her love triangle toy-boy Connor and granddaughter Whitney, as well as the tragic death of her son Billie.

Alfie’s chaotic nature and misdemeanours often landed him into trouble.

Undoubtedly my favourite pub landlord, Richie’s return to the soap as Alfie Moon brought a breath of fresh air to Albert Square. Remembered for his tumultuous relationship with Kat Slater, Alfie’s chaotic nature and misdemeanours often landed him into trouble as he became involved in several cons. His personality often caused rifts between him and Kat, especially over responsibility for their children as they often viewed each other as untrustworthy. In spite of this, they were often viewed as EastEnders’ dream couple by viewers due to the passionate love that they still shared for each other. This all came to a head during the 2018 Christmas special however as it was uncovered that Alfie was in fact the father of Cherry Slater, conceived by a one-night stand between Alfie and Kat’s cousin Hayley. After a furious showdown, things got nasty between Alfie and Kat, leading Hayley to push Alfie down the stairs in a bid to protect her cousin. Whilst Alfie and Kat briefly patched things up, he was forced to flee the square as he owed lots of money from his funeral business and got in debt with Phil Mitchell. As a final act of ‘goodwill’, Alfie left thousands of pounds in his wardrobe for a stunned Kat.

“Jane is probably best remembered for covering the plot of Bobby Beale’s murder of sister Lucy, in a bid to protect her son.”

Whilst Jane’s departure is perhaps less high on some EastEnders viewers’ radars, I still believe it is worthy of a spot on this list. Especially considering the circumstances surrounding her departure and just how valuable of a character she was. Having almost been killed in a gas explosion, Jane was silenced by Max Branning and left unable to tell the other residents about his nasty schemes. This forced Jane to flee Walford in heart-breaking scenes. She did eventually get to say her side of the story however as Stacey accessed a voice message from her – forcing her to kick Max out in rage. As well as being the matriarch of the Beale household, Jane is probably best remembered for covering the plot of Bobby Beale’s murder of sister Lucy, in a bid to protect her son.

Often out for success, money or relationships, Janine’s determined attitude meant that she didn’t care about who she hurt or offended as long as she was able to advance her ambitions.

This really wouldn’t be a list of best departed EastEnders stars if I didn’t include the infamous, powerful Janine. From her relationship with Archie Mitchell to her troubled bond with Pat Butcher and manipulation of multiple Walford residents, it is safe to say that Janine Butcher dominated the square from the start and continued to do this until her departure. Having lost her mother at a very young age, Janine struggled to accept Pat. To led to much resentment and jealously over the years. Often out for success, money or relationships, Janine’s determined attitude meant that she didn’t care about who she hurt or offended as long as she was able to advance her ambitions. Her departure scene therefore didn’t detract from this persona as it looked like she was about to con another couple who had just won the lottery. Whilst she said to the couple that she had left her mistakes behind her, this followed only days after she had just got away with Alice Branning’s murder.

… it is safe to say that a huge hole has been left with Louise’s departure.

The newest addition to the list (but ultimately very necessary) is, of course, Louise Mitchell. Having fully joined the soap back in 2016, Louise soon gained the reputation as an independent and hot-headed Mitchell daughter. Whilst Louise wasn’t always on the best terms with her father Phil, her departure followsed the shock revelation that her boyfriend Keanu, and father of her daughter Peggy, had also conceived her step mum Sharon’s recent baby. This drove Louise into a manic breakdown, driving her to blame herself for everything that had happened to Keanu following this revelation. Set for a new life in Portugal with her mother Lisa in order to better herself, it is safe to say that a huge hole has been left with Louise’s departure.

Featured image courtesy of  the British Broadcasting Corporation (BBC) via IMDb. Trailer from BBC via YouTube.

The Rise of the Menstrual Cup