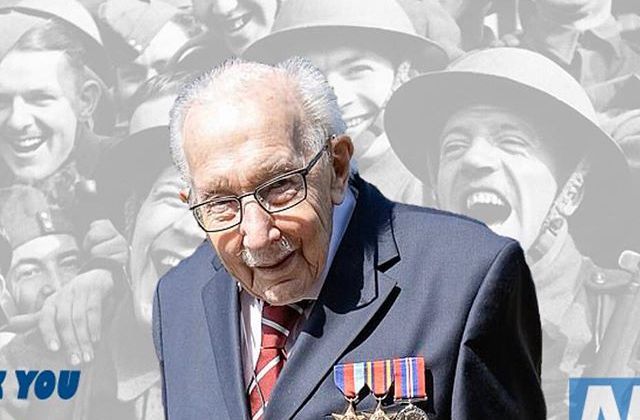 This week the nation has been captivated not by the rising number of cases and deaths associated with the coronavirus pandemic, but by the positive journey of a 99-year-old World War Two veteran who walked 100 laps of his garden to raise funds for the NHS.

Captain Tom Moore aimed to walk 10 laps of his 25-metre garden a day until he reached 100 laps, hoping to finish before his 100th birthday on 30th April. He successfully completed this challenge on the 16th April.  Any person who looks at the achievements of this man in his life would expect in his senior years that he would finally take a break after serving his country for the entirety of his life; not only in World War Two, but other conflicts too. But no.

Mr Moore’s kind heart and determination to help others has led to him raising over £26 million from the point of writing this article by committing himself to this fundraising task. This sum vastly passes the £1000 he initially aimed to raise as well as the £500,000 goal after he realised the huge amount of support being directed to his page.

As a result of the huge sum of money that has been donated to Tom Moore’s JustGiving page by over 1.2 million supporters, people have begun to question whether this money will become lost in the NHS bureaucracy or actually go to hospitals and places that need it most, for example, to underpaid nurses. However, Mr Moore’s page states the charity that the money will go to is NHS Charities Together, which supports NHS staff and volunteers caring for COVID-19 patients. This shows how the money will not be handed to the bosses at the top of the NHS, and will ultimately not get lost within the complicated and underfunded framework of our National Healthcare System. The money will be directed to the areas that need it most, which is reassuring and makes his fundraiser even more impactful.

Captain Tom Moore’s 100 lap walk has not only had a profound effect on the NHS but he himself has also seen impacts he would never of dreamed of when he began this journey. He has received video messages and letters of congratulations off the Duke and Duchess of Cambridge and has been invited to the opening of a new NHS Nightingale hospital as a guest of honour specifically built to treat coronavirus patients.

Mr Moore has now also released a rendition of ‘You’ll Never Walk alone’ with Michael Ball and the Voices of Care Choir again to further raise funds for the NHS. As a result of all of the fundraising Captain Tom Moore has done, a petition has also circulated online for him to be granted a knighthood with the petition receiving over 300,000 signatures so far. Further petitions have also been creating asking  the nation to clap him on his 100th birthday which truly shows how much of an impact he has had and how valuable the nation sees his charitable efforts.

“The simplest ideas can have the biggest impact”

This truly amazing story shows how the simplest ideas can have the biggest impact. I think the most important factor for the huge amount of money that has been raised is the willingness of the British public to come together in times of need, not only to support someone who fought for our country, but someone who is defying the odds of their age category to try and raise money for the NHS- the backbone of our country.

Captain Tom Moore’s exceptional journey should also serve to others as inspiration to show how in times like these we can all help and support each other to encourage change that will benefit us all.

If anyone would like to donate to Captain Tom Moore’s JustGiving page the link is here: https://www.justgiving.com/fundraising/tomswalkforthenhs

Featured image courtesy of @captaintommoore via Instagram. No changes made to this image.

In article image courtesy of @beardedguy50 via Twitter. No changes were made to this image.