The Importance of Being Anti-Racist 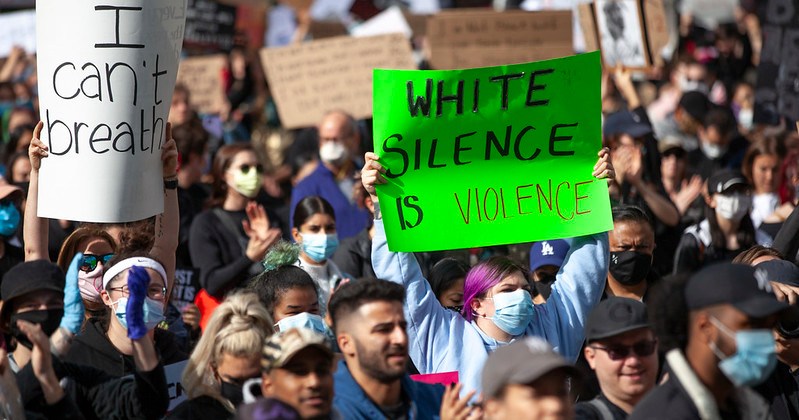 Over the past couple of weeks, I have been thinking a lot about anti-racism, and what it means to be anti-racist. As someone who is half white, I think it is important that we all acknowledge our own responsibility in building and supporting systemic racism. As well as this, by tackling casual, or ‘socially-acceptable’, racism, we can help to weaken systemic racism. Unfortunately, many people have done or said things in the past that are covert racism without recognising it, myself included. Therefore, it is important to become anti-racist and to strive to do better.

Anti-racism is a constant learning journey. You cannot one day immediately become ‘non-racist’ because racism is everywhere in our society: from the disproportionate representation of ethnic minorities in TV shows and films, to the lack of hair products that are targeted towards Afro-textured hair in major drugstores. Hence, it is essential that we continue to actively fight against every level of societal racism, no matter how ‘trivial’ it may seem to those that are non-black, in order to create a society that is truly equal. To do so, we need to recognise white privilege.

White privilege exists. It does not mean that your hardships are no longer valid. However, you do not face inequality because of your skin colour, and therefore do not face the consequences of racial discrimination. As tolerance.org says, “white privilege should be viewed as a built-in advantage, separate from one’s level of income or effort”. Yet, research reveals that it is common for people to “report greater levels of personal hardships” when told of their white privilege, as well as denying its existence. This is an attempt to make the conversation about them, and to try and diminish the role of racial bias in life.

Here are some facts that prove that white privilege does in fact exist, in case anyone you know is sceptical. According to mappingpoliceviolence, out of the victims of police brutality, 24% of those killed were black “despite being only 13% of the population”. Furthermore, black people are “3 times more likely to be killed by police than white people” in the USA. This all boils down to systemic racism and the long-standing silence from white people when it comes to racist attitudes and beliefs.

Outrageously, the police that are responsible for the murders and abuse of black people do not face adequate accountability and punishment, which only adds to normalising racism. In 2015, there were 104 cases involving unarmed black people being killed by cops. Out of these, only 13 ended up with formal charges. Furthermore, in South Africa, the average white person earns five times more than their black counterpart despite constituting only 10% of the national population. Even the very action of calling out racism invokes white privilege. In 2019, after a football match in which a player faced racial abuse, Gary Neville criticised football’s problem with racism and was highly praised and commended. On the other hand, when Stormzy stated that racism is still a problem in the UK, the right-wing media manipulated what he said to vilify him.

Another aspect of anti-racism is educating ourselves on the traditions and cultures of black and ethnic minorities. There is a huge lack of education surrounding black culture, which leads to ignorance. For example, Onision made a video in which he dictated to black women how to care for their own hair – because apparently, he is an expert.

Additionally, a lot of people cry ‘double standard’ when criticised for cultural appropriation. They often respond, “when a black woman straightens her hair it’s okay, so why can’t I have my hair this way?”. However, there is no double standard. Even in 2020, it is not unheard of for black people to be dismissed from work or school because of wearing their natural hair. In contrast, white people are perceived as trendy and stylish when they wear braids. So, there is a lot of pressure for black people to conform to white beauty standards and norms that fail to encompass diversity.

The recurring buzzword ‘double standard’ is very telling of our attitude towards tackling racism within society. Many white people still believe that reverse racism exists (a 2016 study found that 57% of all white Americans believe this). Shockingly, Trump supporters claim that “anti-white discrimination is a much more prevalent problem than is discrimination against any minority group”.

So, it comes as no surprise when the reverse racism card is used at a time when people are protesting for Black Lives Matter and criticising racist behaviours that affect black people. For instance, when Leigh Francis, stage name Keith Lemon, apologised for doing black face on his show ‘Bo Selecta’ many white people shamed him for apologising. They then went on to argue that the film White Chicks should equally be criticised because of its use of ‘white face’. However, ‘white face’ is not racist because it does not have an oppressive history. Black face was used in minstrel shows to dehumanise, and make caricatures of, slaves on plantations. Overall, there is a lack of awareness of the true definition of racism.

Racism exists because of systemic inequality and oppression. It is the duty of the privileged to quash systemic racism and to create an equal society. The only way this can be done is by striving to be anti-racist and suitably punishing institutions and people for racism.

The beauty of anti-racism is that it entails learning and growing. We can all do better and improve. We will never manage to topple systemic racism if white privilege is not acknowledged. Anyone who refuses to listen and learn is allowing themselves to stay ignorant and racist. You can change your mind and your opinion – showing growth is a positive thing.

Featured image courtesy of GoToVan via Flickr. Image license found here. No changes were made to this image.