Centenary of the Birth of Rosalind Franklin: the backbone of DNA’s double helix

In biology class you will have heard of Watson and Crick. But Rosalind Franklin often remains a scientist less mentioned and less recognised. In this article, celebrating the 100th anniversary of Rosalind’s birth, Gwennan Ward looks back on the life of a brilliant, and all too short life.

On 25 July 1920, Rosalind Franklin was born into an influential British Jewish family in Notting Hill, London. From a young age she displayed exceptional scholastic abilities, especially in maths, science, and even sport. Her Achilles’ heel, however, was music; her music teacher went as far as to ask her mother whether she possibly suffered hearing loss. She went on to study Chemistry at Newnham College, a women’s college at the University of Cambridge. 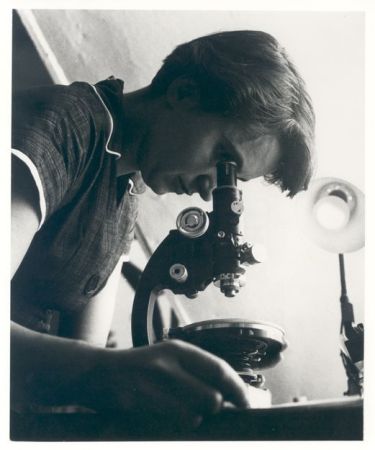 After graduating from Cambridge with second class honours, Rosalind Franklin took on a research position at the British Coal Utilisation Research Association (BCURA). There, she studied the porosity and density of coal using helium. This work helped classify types of coal and predict their performance as a fuel. It even helped in the production of gas masks in war time. The University of Cambridge awarded her a PhD for this work.

One of these images, designated Photo 51, taken by Gosling was to become instrumental in the determination of the structure of DNA

After World War II, Franklin moved to Paris where she worked with crystallographer Jacquesz Mering. (Crystallography is the study of how atoms are arranged three-dimensionally within a structure). She learnt about X-ray diffraction, a technique which probes the crystal structure of materials. Franklin’s work built on the technique allowing her to create images of crystallised solids in all sorts of matter, not just simple single crystals as before.

Her expertise led Franklin to King’s College London to work as a research associate in the biophysics department. She investigated DNA fibres with her assistant, a graduate student named Raymond Gosling and collected the first images of DNA using the X-ray diffraction she had refined. One of these images, designated Photo 51, taken by Gosling was to become instrumental in the determination of the structure of DNA.

However, neither Franklin nor Gosling got their due credit for their contribution. In 1953, Maurice Wilkins, a colleague of Franklin, took Photo 51 to James Watson, a competing scientist who was working on his own DNA model with Francis Crick at Cambridge. Franklin did not give permission for Wilkins to do this.

Their contributions were still never fully acknowledged in Franklin’s lifetime

Watson and Crick used the evidence within Photo 51 as the basis for their famous double-helix model of DNA. This was published just months later in the highly esteemed journal Nature. Franklin is mentioned in a footnote in a statement saying they were merely “stimulated by a knowledge of the general nature” of Franklin’s work. Watson, Crick, and Wilkins received the Nobel Prize for the work in 1962.

Franklin and Gosling were published in the same issue of Nature as Watson and Crick. Though the ordering of the papers, and the aforementioned footnote, meant their contributions were still never fully acknowledged in Franklin’s lifetime.

In 1956 two tumours were discovered in her stomach. However, even while receiving treatment, her dedication to research continued. Her research group (interested in the Polio virus) generated many results and publications. Gosling has suggested Franklin’s exposure to X-ray radiation may have been a contributing factor to her cancer.

On the 16th April 1958, Rosalind Franklin died, aged just 37. Posthumous Nobel Prizes are typically not awarded, though it is debatable whether she would have been part of the prize even had she been alive when it was awarded. That said, Franklin worked in many other areas after her DNA research that may well have won her a prize. Franklin and Photo 51 have recently been commemorated in a special edition 50 pence coin from the Royal Mint.

Audio production of Photograph 51 – A play by Anna Ziegler

Featured image by Arek Socha from Pixabay . Image licence found here. No changes made to this image.

In article image of Rosalind Franklin using a microscope in 1955 by the MRC Laboratory of Molecular Biology from wikimedia. Image license found here. No changes made to this image.

Brooklyn Beckham’s Getting Married: Naive Or Return To Tradition?