Scottish rock behemoths Biffy Clyro returned this month with their ninth album A Celebration of Endings, and it might just be their most ambitious to date. Gemma Cockrell delved beneath the record’s sprawling soundscapes to uncover triumphant fables of hope and resolution – a fitting antidote to our current troubled times.

With eleven tracks spanning from high-paced rock affairs to slow paced ballads, there is something for everyone on A Celebration of Endings. But with it’s intense, riff-propelled guitar intro, North of No South feels like the perfect opener. Accompanied by vast, crashing drums, it immediately grabs the listeners’ attention and captures everything the band have become renowned for. A classic Biffy Clyro song, it is sure to win fans over instantly.

The Champ slows down the pace slightly and what begins as a mellow rock ballad increases in tempo throughout. Even including an orchestra, the track flirts with various styles and genres to ensure the listener never becomes bored. Throughout the album, this theme enables each song to stand out from each next, as well as remain exciting and different – and the trio pull off every style with ease and poise.

However, A Celebration of Endings is not experimental to the degree that it will divide fans. Changing pace again from the bass-heavy Weird Leisure to a pop-rock singalong banger in Tiny Indoor Fireworks, the trio continue to show that they are capable of sticking to their heavy roots while ever experimenting and diversifying their sound.

Weird Leisure tells the forlorn tale of an old friend of lead singer Simon Neil, who chose the wrong path in life and got involved with drugs. Though touching on mournful topics, the song remains one of hope and optimism; narrating the steady journey to recovery in a deeply sensitive manner.  The chorus of Tiny Indoor Fireworks however, is written to be chanted. Whether it be at an intimate gig or the main stage of a festival, the “Hey, Hey, Hey!” bridge is sure to whip the crowd into a frenzy. Securing the track as a summer smash-hit is the lyric “this rain keeps dripping on me,” which seems perfectly fitting for festivals in the British weather!

Space is a string-driven rock ballad that, with a nostalgic tone, touches on the importance of keeping people close to your heart

“Times are changing and everybody knows” and “I’m holding out for change” are lyrics from the successive Worst Type of Best Possible. As one of the more ballad-leaning songs on the album, it deals with more poignant ideas and, placed after Tiny Indoor Fireworks, reflects this in it’s shift of pace and tone. Neil called the song “the other side of Tiny Indoor Fireworks,” as whilst the former is extremely optimistic, Worst Type of Best Possible explores the process of accepting that whilst things may not be great currently, they will get better.

Space is a string-driven rock ballad that, with a nostalgic tone, touches on the importance of keeping people close to your heart. As the slowest and most heartfelt track on the album, it again demonstrates the band’s ability to span rock’s sonic spectrum. From the closing bars of the stirring Space to the beginning of End of represents the greatest shift in pace on the record. 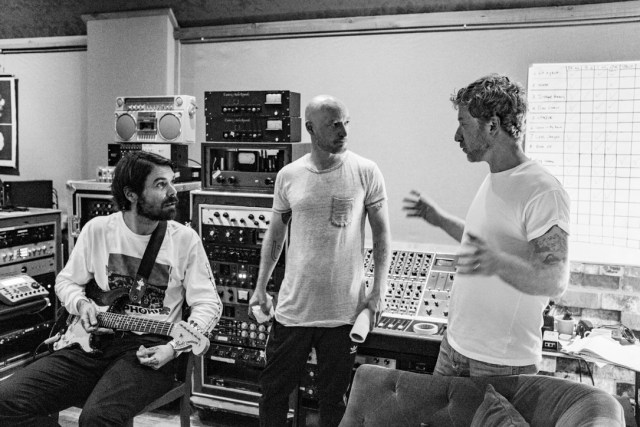 Neil sings in anguish, “this is not a love song, that was just a phase” – clearly leaving the heartfelt tone of the former behind and moving onto a darker, bitter anthem. “It has that grime under its fingernails, in the way that those lush emotional strings of Space don’t,” bassist James Johnston told Apple Music, “It’s like ‘We’re still a rock band!’”

The message of the two songs couldn’t differ more, and yet they sit directly next to each other on the albums track-list. However, the disparity functions only to enhance both songs, as well as illustrate Biffy’s talent for capturing a vast plethora moods and emotions in their songwriting.

Despite forming in the late 90’s, Biffy still experiment with, adapt and change their songwriting methods

Instant History is another song that, like Tiny Indoor Fireworks, has a catchy festival-ready chorus. Contrastingly, The Pink Limit discusses ruminatively how struggles and stresses only help us become stronger in the long run. “If you want peacetime,” Neil croons, “then please prepare for war.” Clearly one of great importance to the band, the track very nearly titled the album before they settled on A Celebration of Endings. “It’s about taking responsibility for what you’re doing,” Neil explained, “if you choose to believe in something, go for it. But don’t try and indoctrinate other people.”

The Pink Limit was written in a unique way for the band as rather than the beginning with a guitar melody, the track formed around a drum rhythm. Despite forming in the late 90’s, Biffy still experiment with, adapt and change their songwriting methods; a process that could be key to their success and longevity in the music industry.

Thanks so much for all the love, we hope you enjoyed the show and the new album! Bring on the North, Central and South American stream next!

The album winds down with the deeply personal ballad Opaque, which details the experience of kindness being taken for weakness. Offering an alternative meaning, Neil explained that the song also explores the phenomena of having a song that he is deeply attached to and was written from personal experience, be treated as a ‘product’ and stripped of its meaning. Though many musician’s have opened up about the experience, it is an extremely unique topic to write about and makes Opaque one of the album’s standout tracks.

However, closer Cop Syrup ensures the album does not end on a sombre note. A notion incredibly ironic considering it has the same instrumentation as Opaque, but as Neil explains, “couldn’t be more different.” The song is about knowing what you believe in and fighting for it; a concept many of us have become especially aware of in recent months thanks to the Black Lives Matter movement. Screaming vocals, fast-paced guitar riffs and urgent drum rhythms are used to capture the urgency of fighting for justice and what you believe in, whilst a beautiful middling instrumental section sees the song begin to embody the conflict and fight against itself.

Being at once diverse, ambitious, meaningful, interesting and exciting, A Celebration of Endings is therefore an impressive feat. Whilst covering a wide range of different tones and styles within its eleven tracks, the album remains joyously cohesive, and without being ever becoming pessimistic, is remarkably relevant to the current times. It is therefore a record that people will be able to look back on in years to come and remember the chaotic year that was 2020.

Though it never strays from their renowned rock roots, A Celebration of Endings is different to anything Biffy have ever written before. It’s a record  about hope, Neil laughs, “and we’re not renowned for that.” But with standout tracks like Tiny Indoor Fireworks, Space, End of and Opaque, Biffy Clyro’s ninth full-length ensures they will continue to be known as one of Britain’s most vital rock bands.

Article image courtesy of Biffy Clyro via Facebook. No changes were made to this image.

The Socially Distanced Show Must Go On