The Socially Distanced Show Must Go On

Indie singer-songwriter Sam Fender paved the way for COVID-era live music last week as he headlined the first socially distanced gig of its kind. But with moshpits swapped for platforms, what does the future of gigging entail?

Fans in his hometown of Newcastle flocked to the 2,500-capacity Virgin Money Unity Arena as live music made a triumphant return. After a cancelled spring tour brought disappointment to many of his fans, Fender lifted the spirits of many concert-goers last week, performing new material as well as hits from his chart-topping album Hypersonic Missiles in a socially-distanced fashion.

The event saw five hundred platforms, spaced two metres apart and seating up to five people each, stretched across Newcastle’s Gosforth Park. Ticket holders were required to wear face-coverings and make use of the many hand-sanitising stations dotted across the venue – world’s away from the cramped, sweaty crowds we are used to at gigs and festivals. 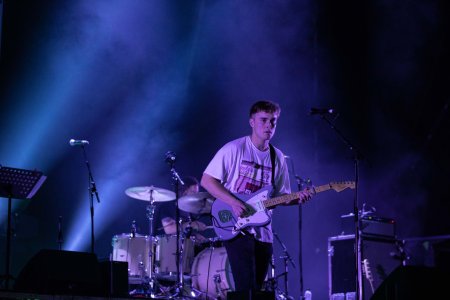 There is no doubt that the live music experience will be unrecognisable for the foreseeable future. No longer can music lovers roam festival fields and mingle at blissful leisure – security will be enforcing strict rules to limit unnecessary roving of the venue, as seen at Fender’s gig earlier this month.

However, this isn’t all bad news and in many ways it will actually make live music accessible to a wider range of people. For those who love live music but avoid gigs due to the large, cramped crowds which can induce anxiety and claustrophobia, the socially-distanced set-up is a dream.

ENERGETIC YET CONSCIENTIOUS, IT WAS A TRIUMPHANT ATTEMPT AT REBOOTING LIVE MUSIC, ESPECIALLY DUE TO THE LACK OF GOVERNMENT SUPPORT FOR THE MUSIC INDUSTRY

Audience members have a reserved place in the crowd and more than enough elbow-room, which arguably leads to a more convenient and leisurely gigging experience. Gig-goers are also able to leave the platform to grab refreshments when they please, and avoid having to fight tooth-and-nail for a place in the crowd upon return.

Some have argued however, that socially distanced shows miss the mark as they fail to capture the true essence of live music; bringing people together. But whilst the pandemic may have made this impossible in the physical form, Fender’s lively set still drew the audience together in spirit.

Energetic yet conscientious, it was a triumphant attempt at rebooting live music, especially due to the lack of government support for the music industry during the pandemic. Additionally, since safety measures such as mask-wearing and hand sanitising have become a customary part of everyday life, they are unlikely to take away from the live music experience.

After the success of the show, it would not be surprising if a slew of artists follow suit. The Newcastle arena is already set to host indie chart-toppers Two Door Cinema Club and Tom Grennan, as well as comedians such as Jimmy Carr, in coming weeks. Whilst it may not be perfect, credit has to be given to Sam Fender and his team for their innovative take on COVID-era concerts. With the socially-distanced show being the new normal for the foreseeable future and other artists following Fender’s lead, music fans are able to look forward to safely enjoying live music again.

Article image courtesy of Virgin Money Unity Arena via Facebook. No changes were made to this image.

The Problem With Referendums