Notts Homeless Charities Go ‘Above and Beyond’ During Coronavirus 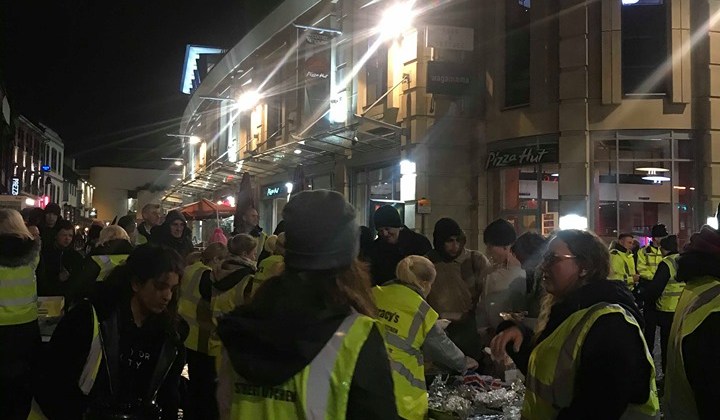 When the Coronavirus lockdown began in March, more than 14,500 homeless people across the country were put into emergency housing. Since July however, government funding began to run out, forcing many to return to their lives on the streets.

As a result, several charities in Nottingham were forced to adapt to circumstances, working determinedly to help the vulnerable and homeless population across the city. Included in this group of charities have been three student-run initiatives: Foodprint, Souprunners Nottingham, and The Rucksack Project.

Foodprint, supported by Enactus Nottingham, is an award-winning surplus supermarket and redistribution network launched in 2017. Based in Sneinton, Nottingham, the Foodprint supermarket sells and delivers unsold food from large supermarkets to food banks, homeless shelters and school breakfast clubs in Nottingham.

When universities began to close however, Foodprint began to face new challenges as this forced much of the management team and volunteers to leave Nottingham and return home. Knowing just how many people rely on them for affordable food, Foodprint organised regular video calls, and welcomed new volunteers from the community to not just help keep the store going but expand its redistribution service to help out even more vulnerable citizens.

The store ensured safety by running from the front door and went one step further by starting up a delivery van to distribute food to elderly people and those who might be self-isolating.

The Rucksack Project, a University of Nottingham student led project based on the Sutton Bonington campus, aims to provide winter supplies for the homeless every year. This year, for the first time, the volunteers organised a second handout to take place during the summer, distributing toiletries and essentials, as well as summer supplies such as sun hats and sunglasses. 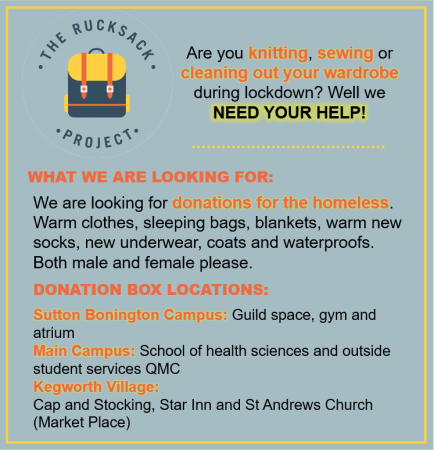 Unfortunately, the Coronavirus outbreak prevented the summer distribution from happening, postponing its debut to next year. In the meantime, some of the items already collected will be given to fellow UoN student run project Vets in the Community, whose work has also been on pause during the lockdown, for when the clinics start running again.

As The Rucksack Project relies heavily on donations, donation box locations have been set up across three of UoN’s campuses for the hopes of any items from people doing a spot of lockdown cleaning.

After raising a whopping £510, Souprunners Nottingham divided the money between six organisations

Souprunners Nottingham is another non-profit organisation run by University of Nottingham students, with volunteers providing two weekly ‘soup runs’ in the city centre on Tuesdays and Sundays. These, however, came to a halt when the Coronavirus outbreak led to the suspension of all group activities by the Students’ Union. 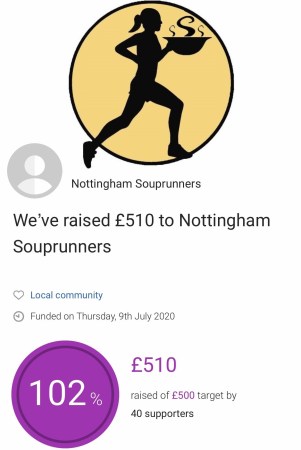 Halting of SU activity also meant the annual sponsored ‘sleep out’ volunteers usually take part in to raise the funds for the soup runs could not take place. As an alternative, the Souprunners decided to start a fundraiser to raise money for similar organisations that have been continuing to deliver meals to the homeless during this time.

After raising a whopping £510 pounds, Souprunners Nottingham divided the money between six organisations, including Guru Nanak’s Mission, S.A.F.E, The Friary, Blindeye, and The Eat Team.

The final of these was Tracy’s Street Kitchen, who in March expressed their determination to continue providing food for the homeless every Friday, despite the pandemic, due to their work providing for many their only hot meal of the week.

When homeless and rough sleepers began to be moved into temporary accommodation, the Kitchen worked with similar groups to create a rota, providing hot evening meals and sandwiches on their designated days. They have also been making care packages containing toiletries and other essential goods, which have further been distributed to other vulnerable members of the community where possible.

Co-organisers… have gone above and beyond their promise

Tracy’s Street Kitchen also received produce from Nottingham Trent University’s two vertical farms, created to help the world tackle situations which threaten global security. The crops include pak choi, swiss chard, lettuce, coriander and basil to the charity, which have already been put to use in dishes including curry, and sausage and mash.

Co-organisers Tracy Dickinson and Andrew Ellis have gone above and beyond their promise, continuing to run the street kitchen in Trinity Square on Thursday, Friday and Saturday evenings, and for Sunday lunch too, for those who did not find temporary accommodation.

Pint-Sized Punk: How a 10-Year-Old Created a Lockdown Print Hit for Punk Fans