Pint-Sized Punk: How a 10-Year-Old Created a Lockdown Print Hit for Punk Fans

Where punk first thrived on the wayward corners of London’s Kings Road, it has since found a new home in the bedroom of a ten-year-old boy who’s music magazine has amassed fans globe-wide.

From home-schooling project to international publication, Arlo Lippiatt’s Pint-Sized Punk fanzine has featured interviews with the Manic Street Preachers, as well as IDLES and Fontaines D.C., both of whom were shortlisted for last year’s Mercury prize. Now, with the zine’s third issue set for release this Friday, the knee-high punk seems set for a promising future in the music industry and as a symbol of the power of creativity in times of hardship.

“We just thought a few tolerant friends and family would give Arlo a pat on the head and say, ‘well done'”, mum Hannah Lippiatt told BBC News earlier this week, but following the success of the first edition Arlo, who writes and edits nearly all the content with help from his mother, was forced to switch production from a home printer to a professional company. With orders from as far as Australia, New Zealand and the United States, the print run of 50 copies for his second issue sold out in days.

An antidote to the stale, stony-faced music journalism that dominates much of the contemporary sphere

Much of Arlo’s musical affinity can be attributed to his mother Hannah, an English tutor, who immersed him in the Bristol music scene from a young age. “When lockdown happened and my school closed, mum asked me what I wanted to write about, and I said music,” Arlo told The Times – his penchant for punk evident in both his exuberant tone and the unruly hair that curls beyond his shoulders. 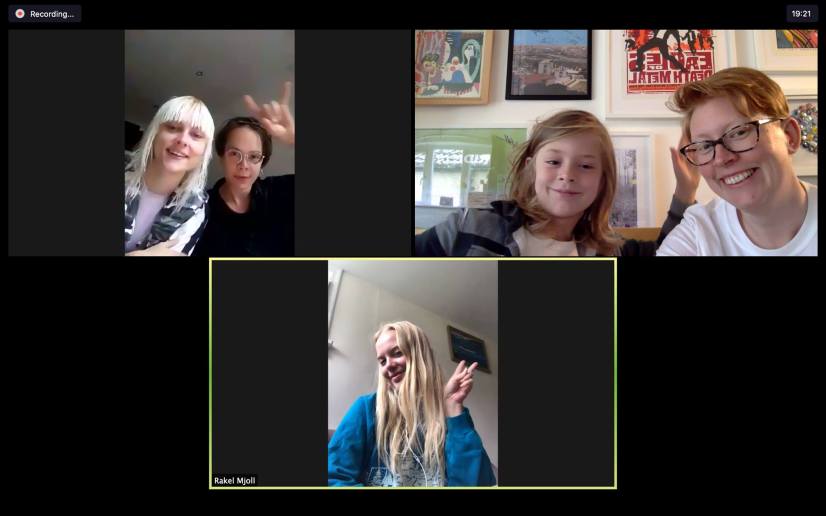 Arlo and his mum on a recent Zoom call with London rock band, Dream Wife.

If you’ve ever wondered your favourite bands’ opinion on Marmite, or perhaps their smelliest gig, Lippiatt’s youthful, tongue-in-cheek camber is certainly for you. “You haven’t done anything in a while – what are you doing?” the cheeky ten-year-old asked Welsh indie rockers, Super Furry Animals, in a recent Zoom interview. An antidote to the stale, stony-faced music journalism that dominates much of the contemporary sphere, Lippiatt’s approach is refreshing in its unsparing, childlike honesty.

The zine quickly caught the attention of industry figures, including Lauren Laverne, the host of Desert Island Discs, who interviewed him on her BBC 6 Music show last week. “Can confirm Arlo asks all the hard hittin’ questions,” she tweeted, “pizza toppings caused a riot.” But the young punk isn’t letting the attention go to his head, and has spent recent weeks volunteering at local record stores and championing grassroots punk in a moment where it has never been needed more. 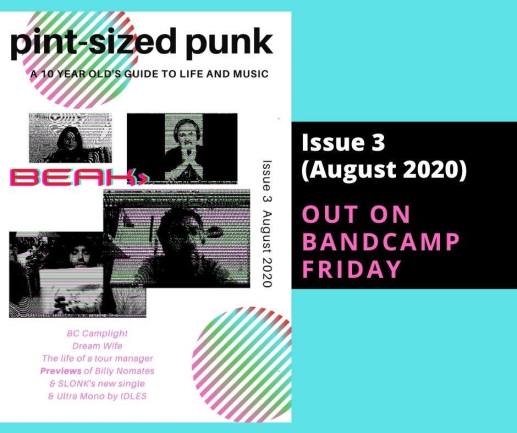 Issue #3 of Pint-Sized Punk is set for release on Bandcamp this Friday.

Aptly, a small clenched fist with ‘pint-sized’ etched across it in black ball-point has quickly become the zine’s official insignia. Despite falling slightly short of punk’s traditional audience – at just ten-years-old and barely five foot tall – Arlo embodies the spirit and ardour of the scene in abundance. With it’s yowling guitars and angry, politically-singed lyrics, the genre is as important as ever, and is unrivalled in its ability to capture the agitated conscience of the young. “At its core it’s rebellious music,” Refused’s Dennis Lyxzén told Kerrang, “and that will always speak to young people.”

And so, in a month where British musical linchpin ‘Q Magazine’ was the latest to shutter and the future of music journalism looked especially morose, the Pint-Sized Punk zine and its voracious namesake offer a glint of hope for music’s next generation.

You can get hold of your own copy of the Pint-Sized Punk zine at:

Notts Homeless Charities Go ‘Above and Beyond’ During Coronavirus