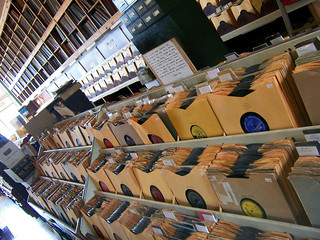 Like many other yearly events, Record Store Day (RSD) 2020 as we normally know it had to be cancelled.

Yet, instead of forfeiting the vinyl tradition celebrating over 200 of the UK’s indie record stores by releasing limited edition records for avid collectors to get their hands on, RSD have revamped the event by introducing a celebration of a similar nature split over three days. The first of which is this Saturday 29th August.

Where the emphasis on this event is usually to celebrate live music and an excuse to hang with friends, this year it’s a great way to support small independent record stores and artists that have suffered financially due to lost work.

Amongst record stores participating is our very own Rough Trade on Broad Street up in Hockley. If you are in Notts this weekend and you’ve got a few summer pennies left over to spend, I’d highly recommend popping in and seeing what you can get your hands on.

As an avid vinyl collector myself, here are a few limited releases that I have had my eye on:

Live to Vinyl, The Big Moon

As ambassadors for the original RSD scheduled for April, I had to mention this offering by one of my favourite bands The Big Moon. Recorded at Metropolis Studios on the 5th March to a lucky studio audience this 12” vinyl consists of tracks Your Light, Waves and a cover of Fatboy Slim’s Praise You recorded live and pressed to vinyl there and then.

Although The Big Moon gals can’t be running around various stores playing shows and signing records as their ambassador role planned, this is still a one of a kind release that shouldn’t be missed.

Hey guys. Today we are joining together with 1500 other artists to ask the government to support live music! The magic of music is in its ability to bring people together and to share experiences. We obviously can’t and shouldn’t do that physically at the moment, but without some kind of support, the impact on this whole part of our culture could be devastating and, as always, the parts of the industry that will suffer the hardest are those we need to protect most. There are 210,000 people working in the live music economy all across the country. That includes not just the artists we see, but all the amazing venues, touring crew, studio staff, promoters, managers, the people organising festivals, and a zillion others. It’s a whole ecosystem and it has all just been wiped out. As many other UK businesses are now finally able to start working back to normality, the live music industry is looking at sitting and waiting for a very long time and unless we get some help, some parts will not survive the wait. Please share the hashtag #letthemusicplay and let the government know how you feel! THANK YOU WE LOVE YOU xxxxxxx Pic by @soundofapeach ❤️

My most anticipated release of 2019 Any Human Friend is having a vinyl revamp for RSD, now a year on from its original release.

Four tracks from Marika’s saucy lil show-stopper appear on this record as acoustic numbers. The A side features ‘blow – acoustic’ and ‘the one – acoustic’ in which Marika’s self-assertion and risqué lyricism (take ‘all you f**kers want my dick’) make for a heady concoction when mixed with her angelic vocals in this stripped-back version.

Frankly, if you are looking for a new acoustic album for your collection that will leave you marvelling at its clever lyricism, I would recommend checking out this 10” hitting record stores this RSD.

this Saturday, as part of the first online #recordstoreday drop, you can pick up the Any Human Friend acoustic EP on limited 10" vinyl. available at all good record stores 🐖 #rsddrops

Beautiful Faces / The Key to Life on Earth, Declan McKenna

Featuring two new songs from his upcoming album Zeros, this transparent purple 7” pressing is a must have for any indie-loving McKenna fans. Of ‘Beautiful Faces’ McKenna told NME ‘I wanted it to be a big song…Scary big. It very much relates to now’. The track depicts the struggles young people face today, for instance in the chorus he sings ‘beautiful faces smiling over us’, a potential allusion to the way that conventionally beautiful people seem to take precedence and almost be put on a pedestal on social media. ‘The Key to Life on Earth’, then, sees McKenna commenting on ‘hostile human relationships’ in which ‘happy go xenophobe locals have got it in for me’.

Although I might be cheating a little bit including this release as it drops on the September RSD, it is very much worth the look when the time comes around.

Click here to see a full list of RSD August releases and, if you cannot make it to Rough Trade Notts have a look here to find your local participating retailer.

Interview With Rob Temple – Author Of ‘Born To Be Mild’