Barcelona are in disarray. Summer-after-summer of atrocious and overpriced signings, a revolving door of managers, and a third year in a row of Champions League humiliation have left Barcelona on the brink. And now, as if things couldn’t get any worse for Barcelona fans, their star player, the world’s greatest, Lionel Messi, has declared his desire to leave- by fax, of all things.

And can you blame him? He’s been at the club for twenty years, winning everything there is to win. He’s their record goal scorer and their record assister. He’s given everything to this club, and then some. The man is 33 and hasn’t got many years left at the top. This Barcelona team needs an enormous rebuild, and that process will take years. Messi doesn’t want to waste his twilight years, and so he seeks pastures anew.

So, the question is, where next? Every club out there wants him, but it’s not so straightforward.

First, there’s the question of price. One detail in his contract decides whether you can get Messi for nothing, or whether it’s going to cost you hundreds of millions of euros. Messi’s contract states that, at the end of each season, he can leave the club for free, as opposed to his €700m release clause. However, Barcelona claim this ‘get-out-of-jail free’ clause expired on the 10th of June, 10 days after the Champions League final was supposed to be held (30thMay). Messi’s side argue that, as coronavirus caused football to be suspended for months, the date his clause expires should be altered too. Regardless, Messi’s astronomical salary is reportedly over €60m. Even if he’s available on a free, only the world’s biggest clubs could likely afford him.

There’s also a question of system; Messi is no ‘cog in the machine’. Any team that does sign Messi is certain to build their team around him, so how he would fit best into the team is something to be considered. With this mind, I’ve looked at SkyBet to see which clubs are leading the way for Messi’s coveted signature, at the time of writing.

Newell’s Old Boys are an outside shout at 33/1. Whilst they lack the financial backing and international appeal of some of the other teams on this list, they do have one thing in their favour: Messi played for their youth ranks between 1994 and 2000. As such, fans have been out parading in Messi’s home town of Rosario in an attempt to bring the legend home. Such a deal is unlikely for now, but, in a few years’ time, this could be the place Messi finishes his legendary career.

The likes of Chelsea and Juventus sit at 40/1 – the former has surely already spent too much money this summer to finance such a move, and the latter, whilst making every football fan’s dreams come true in having Messi and Cristiano Ronaldo in the same side, likely cannot afford to have both our generation’s greatest players on their wage bill? Also at 40/1 is Any MLS Club, but I doubt Messi is ready to head for his retirement home yet!

A little ahead of Newell’s Old Boys at 22/1 is Manchester United. The most successful side in Premier League history certainly has the right environment for a player of Messi’s stature, and every United fan would love to say they’ve had Messi and Ronaldo in their team. However, whilst they could afford Messi, their recent recruitment strategy points away from a signing like him. Their last four signings have all been 27 or younger, with Aaron Wan-Bissaka and Daniel James both 21 when they signed for the club.

Messi would fit nicely into a front three consisting of himself, Marcus Rashford and Anthony Martial, though this may stunt Mason Greenwood’s promising development. Manchester United are also in the midst of their own rebuild and are unlikely to be challenging for the Champions League next season. It’s also worth questioning if the relatively inexperienced Ole Gunnar Solskjær is really the right man to get the best out of Messi.  I somehow doubt it.

PSG, fresh from their Champions League loss to Bayern Munich, are next up at 16/1. They do have a history of buying big, shattering the world transfer record when they signed Messi’s friend and former teammate, Neymar, from Barcelona for €222m. Their ambitions are also in-line with Messi’s – all PSG have cared about since they attained a monopoly over Ligue 1 is winning the Champions League. A front three of Mbappe, Neymar and Messi is also a terrifying prospect. The one aspect that may put Messi off PSG is the fact they play in a so-called ‘Farmer’s League’, meaning that at PSG, winning the league isn’t really an achievement. Messi might prefer another environment, where things are perhaps a bit more competitive…

Inter have risen like a phoenix from the ashes in recent years, having largely fallen off the radar after their Wesley Sneijder-inspired era of success culminating with their 2010 treble. In the 2019/20 season, they reached the Europa League final and finished 2nd in Serie A to Juventus, which is no mean feat. Under Antonio Conte, they’ve somehow managed to give Ashley Young a new lease of life, and have also rejuvenated two more Manchester United rejects, in Romelu Lukaku and Alexis Sanchez. Add to that the shrewd acquisition of Christian Eriksen, Diego Godin leading Serie A’s best defence, and the talented Lautaro Martínez partnering Lukaku up top, then you have yourself a very competitive team. So, what’s keeping Messi from joining the club?

Well, as rich as Inter’s owners are, Messi could commandeer just too much of a financial burden. Also, Conte’s system brings its own issues. He has always favoured a three-at-the-back approach and plays with two up top, meaning there’s little room for Messi’s preferred right-wing position. There is the option for Messi to have a freer role, perhaps dropping in-between Lukaku and Martínez, but it remains to be seen if Conte would be willing to alter his whole team to shape it round one man. Even if that man is Lionel Messi.

If Messi were to move, the club most likely to attain his signature is Manchester City, with odds at 11/8. Yes, City can afford him. Yes, Messi is great friends with Sergio Aguero, and would link well with Kevin De Bruyne, the best midfielder in football. Yes, City’s number one ambition is winning the Champions League.

Guardiola converted Messi into the ‘false-nine’ role, leading the club to two Champions League successes and creating one of the greatest club sides the world has ever seen.

But, above all else, the key factor in Messi moving to City is their manager, Pep Guardiola. Whilst it was Frank Rijkaard that gave Messi his Barcelona debut, it was Guardiola that made him the best player in the world. Guardiola converted Messi into the ‘false-nine’ role, leading the club to two Champions League successes and creating one of the greatest club sides the world has ever seen. The allure of being reunited with Guardiola is great, and makes the blue half of Manchester his most likely destination. It would certainly be a delight to see Messi play in the Premier League – it’s just a shame that it would be playing for a club that was founded in 2008!

Messi’s potential transfer has inspired football fans across the globe into believing that they could see the world’s greatest player playing on their doorstep. Students in Nottingham are no different. Best placed to sign Messi out of all the local teams in Nottingham is the coveted IMS side Notts Nomads. Their player-manager and captain, Charlie Conduit, said they were in advanced talks with the winger, and sent me an Instagram message of their one-sided conversation. 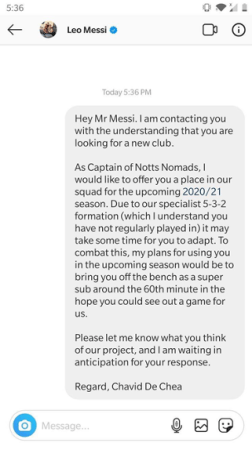 There’s a lot going against the deal. None of Nomads’ players are on any wages, so Messi would be reliant on a scholarship from the University of Nottingham if he wants to get paid. There’s also systemic problems with Messi’s potential arrival. Conduit notes that Nomads play a unique 5-3-2 system, which Messi may ‘take some time’ to adapt to. There is the suggestion that Messi could be used as an impact sub, used to replace the injury-prone Max Kendall. However, it’s unclear whether Messi would be happy going from a Barcelona starter to this bit-part role.

It’s not all doom and gloom though. Messi would be joining a growing team on the up. After losing all of their games in 2019, Nomads are unbeaten in 2020 with a 100% win rate. It’s a remarkable turnaround, sparked by their tactical revolution, and has led to them having a loyal fanbase of four supporters who turn up depending on the weather. Messi would be joining a team stacked with up-and-coming stars, including man-mountain Finn Cadell, superstar mathematician George Brown, and Matthew McDermott, said to be Pirlo’s heir.

Perhaps unremarkably, given the complexities of any deal, the most likely outcome is Messi staying at Barcelona, with odds at 8/11. It’s been suggested that Messi’s transfer request is simply a power play to oust the board. Staying at the Camp Nou would perhaps be the most disappointing option to any football fan, who would love to see if Messi can really show his brilliance outside of Barcelona.

Regardless, Messi cannot win. People have argued that to cement his place as the greatest of all time, he needs to leave Barcelona and prove his ability elsewhere, much like Ronaldo has done. And yet, now he has indicated he wants to leave, he’s been criticised for being a coward and being the captain who leaves the sinking ship.

Irrespective of this, this is one of the biggest stories to come out of football in recent memory, and will be one of the greatest sagas of the transfer window.

Featured image used courtesy of Marc Suria via Flickr. No changes were made to this image. Image use license here.

From Memento To Tenet: How Christopher Nolan’s Films Continue To Capture Our Imagination