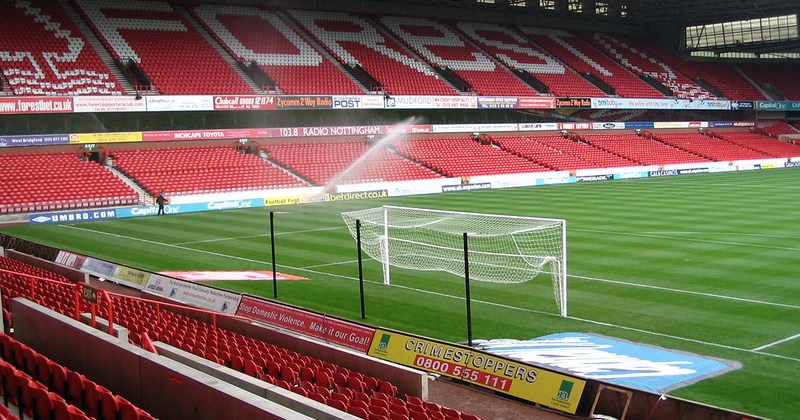 Sabri Lamouchi’s start to the season goes from bad to worse, as Fraizer Campbell stunner seals first victory for Corberán.

The result is sure to intensify pressure on an increasingly faltering Lamouchi. Following substantial backing over the summer transfer window from owner Evangelos Marinakis, a negative, and more pressingly losing, brand of football, is unlikely to cut the mustard in lieu of last season’s devastating final day collapse.

Perhaps fearful of a disjointed back four comprised entirely of new additions, Lamouchi opted to field seven predominantly defensive players, with Luke Freeman shunted from a more natural central midfield position to a right-wing berth – the so called ‘graveyard shift’.

Forest’s line-up featured several additional changes from last week’s 2-0 home defeat to Cardiff City, with débutant Harry Arter relieving under-fire Ryan Yates from his central-midfield role. Arter represents a step-up in both experience and passing ability over a tenacious Yates; approximately 13% more of Arter’s passes found their intended target compared to Yates’ previous two Championship games. It is, however, important to recognise the qualities Yates provides, with significantly more tackles than any other Forest player thus far this season – the stream of negativity in his direction appears somewhat undeserved.

Over the course of the 19/20 Championship season, Joe Lolley and Lewis Grabban contributed 29 league goals, yet both fell to the bench here. The bulk of any Forest attacking aspiration rested with an enigmatic Sammy Ameobi and the ever-volatile Lyle Taylor. With both teams yet to score in any competition this season, such a line-up promised little in the way of an open, free-flowing game, however the game launched with a lively start involving a heavy challenge from Jonathan Hogg on Arter after just forty seconds. Whilst the base of Hogg’s studs may have grazed the top of the ball, the midfielder’s challenge was at shin-height, and warranted a yellow card at minimum, if not further punishment.

Forest’s indignation was exacerbated but ten minutes later; Hogg received a yellow card, this time for a foul on an increasingly influential Ameobi. Having been entrusted to carry the majority of Forest’s direct attacking threat, Ameobi was fulfilling his role expertly, and in the 19th minute was able to jink away from Romoney Crichlow-Noble to unleash a curling left-footed finish, only to be denied by ‘keeper Ben Hamer. For the remainder of the first half, both sides exchanged half-chances – most notably with Juninho Bacuna’s skidding drive forcing an uncomfortable save from Forest’s Brice Samba, before Hamer denied Loïc Mbe Soh’s stooping header prior to half-time.

Chance creation remained a problem for Forest as the game entered the latter stages, with a subdued Luke Freeman and an unambitious Harry Arter unable to force a breakthrough

Both sides fielded relatively unseasoned defences, with Crichlow-Noble making his first start for Huddersfield and Forest’s entire back-four possessing only one appearance for the club between them, prior to Friday’s match-up. However, it was not a defensive mistake but a moment of individual attacking brilliance from Huddersfield’s Fraizer Campbell that breached the deadlock. Following a one-two between Harry Toffolo and the outstanding Josh Koroma in the 54th minute, Toffolo was able to dig out a left-footed cross from the by-line towards the Huddersfield penalty spot, which Campbell swept sweetly into the bottom-right corner.

Lamouchi responded immediately with a substitution, replacing the yellow-carded Samba Sow with the impressive Alex Mighten. Nevertheless, Forest were unable to sustain periods of meaningful pressure, until the arrival of striker Lewis Grabban almost paid immediate dividends when he struck a half-volley inches above Ben Hamer’s crossbar. In the absence of midfield schemers Tiago Silva and Joao Carvalho, chance creation remained a problem for Forest as the game entered the latter stages, with a subdued Luke Freeman and an unambitious Harry Arter unable to force a breakthrough.

Indeed, Huddersfield threatened to seal the game with a second, conspiring to miss a four-on-two situation courtesy of some excellent goalkeeping from Brice Samba. However, the game petered to a conclusion, with Huddersfield able to utilise Championship experience from the likes of Hamer and Richard Stearman to engineer Corberán’s first Huddersfield victory.

Forest were left unable to score for a third successive league game, with Lamouchi bemoaning “various situations against us [Forest] that have not gone our way”, in reference to both the potential Hogg red card and a dubious penalty shout for a trip on substitute Alex Mighten. Lamouchi’s focus, however, must rest with arresting the ruinous goal-scoring form that has precipitated Forest’s worst start to a season since 1954, else a football club that has employed thirteen managers since 2014 may well be looking for a fourteenth come October.

Featured image used courtesy of The Stadium Guide via Flickr. No changes were made to this image. Image use license here.

In article image 1 courtesy of @officialnffc of via Instagram. No changes were made to this image.

In article image 2 courtesy of @officialnffc via Instagram. No changes were made to this image.

The Truth Behind ‘Re-Education Centres’ In China

A Christmas Miracle: Gavin Williamson Confirms Students Will Be Home For The Holidays