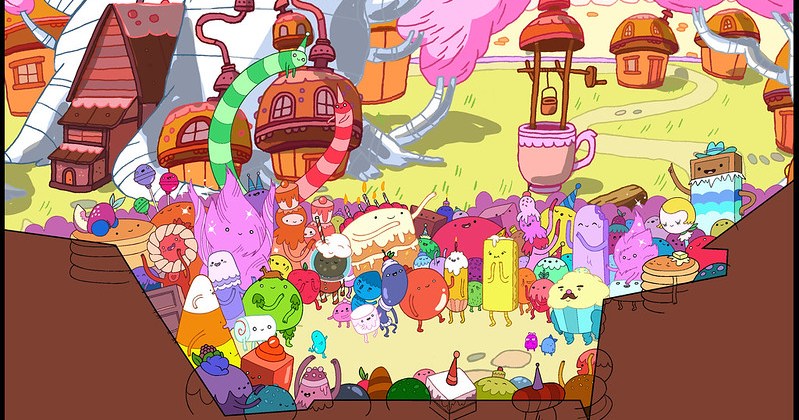 Cartoon Network jumpstarted the current golden age of TV animation back in 2010 with Adventure Time, and they continue to set an example to the rest of the industry, especially when it comes to LGBTQ+ representation.

SU is a wholesome slice of life/action ‘toon with a killer soundtrack, but don’t let that fool you: Its lore is deep and its characters are deeper; flawed and complex and dealing with some heavy themes like caste systems, imperialism, PTSD, abusive relationships, depression and more.

SU is also one of the queerest shows on television. Creator and Adventure Time alum Rebecca Sugar has confirmed that every alien ‘gem’ character is genderless, there’s aromantic/asexual representation, intersex representation, polyamorous representation and at least four of the main/supporting cast are explicitly confirmed as sapphic.

This isn’t tertiary set-dressing either. SU’s LGBTQ+ storylines are seamlessly integrated cornerstones of the cast’s character arcs. Whether it’s getting over unrequited love millennia later, recovering from abuse, or managing co-dependence, SU offers a breadth of queer stories unseen anywhere else in the medium.

Crucially, lots of this is done through clever metaphors that don’t beat the audience over the head with gender politics that the One Million Moms crowd insists are ‘too adult’ for kids. The most prominent of these metaphors is Fusion – the ability for two or more Gems to combine into a new being with a mix of their powers and personalities. The fusions created by different characters are personifications of their relationships with each other.

The most important fusion in the show is Garnet, a pair of Gems named Ruby and Sapphire who have been fused together for thousands of years. Garnet has become a queer icon – the walking embodiment of an interracially-coded lesbian romance referred to in the show as ‘the perfect relationship’.

Less tolerant regions heteronormalized Garnet by giving the masculine-looking Ruby a male voice actor. So, what did Sugar do? Made Ruby and Sapphire the brides in animation’s first gay wedding, of course

Sapphire and Ruby, based on Sugar and her husband Ian Jones-Quarterly respectively, were conceived in the show’s 2011 pitch, but Sugar waited 52 episodes to reveal them for fear of cancellation. It had to be long enough that by the time they debuted it would be too late for the censors to cut them. Bear in mind that this episode, Jailbreak, aired 3 months before the US Supreme Court ruled gay marriage as a fundamental right in June 2015. They were on very shaky ground.

SU battled worse censorship overseas (including in the UK) or straight-up bans (they replaced Russia with a massive crater for a reason). Less tolerant regions heteronormalized Garnet by giving the masculine-looking Ruby a male voice actor. So, what did Sugar do? Made Ruby and Sapphire the brides in animation’s first gay wedding, of course. And put Ruby in the dress, just to stick it to those male dubs. Best of all, the wedding was part of a plot-heavy special that radically changed the status quo, so if the censors skipped it then the rest of the series wouldn’t make sense!

The wedding came at a cost, however: After a three-year fight to get it made, Sugar had to choose between keeping it or keeping the show’s international funding. It wasn’t the first time other countries dropped the show; SU was South Africa’s most popular kids show until its queer themes became explicit.

So, creators must choose; do they operate within established limitations and tell a more complete story, or do they sacrifice their own shows’ narratives to break new ground and pave the way for future creators?

But Sugar had worked under the threat of cancellation for SU’s entire run (originally they thought 1×26 ‘Ocean Gem’ would end the series). The show– particularly Ruby and Sapphire’s story – was incredibly personal to her experiences of homophobia, mental health and self-discovery,  and it helped her come out (first as bisexual, then as non-binary) during its production. She wasn’t letting go now.

By going ahead with the wedding SU lost most of its funding and subsequently had its run functionally ended. Sugar had to fight for a final nine episodes (the ‘Diamond Days’ and ‘Battle of Heart and Mind’ arcs) so she could rush through the series’ conclusion despite vocal criticism. Sugar has discussed many pivotal stories she never got to tell because of these new time constraints, even with the Future sequel series.

On the plus side, the Rupphire wedding had a demonstrably positive effect on LGBTQ+ rep in the wider industry. Sugar’s husband Ian Jones-Quaterly noted that, when running his own show, OK K.O.! Let’s Be Heroes (2017-2019), Cartoon Network’s receptiveness of bi/lesbian couple Enid and Red Action improved drastically after SU’s wedding “blew the door open”. We even got an onscreen kiss, and the show ended with its own gay wedding between Lord Boxman and Joff.

So, creators must choose; do they operate within established limitations and tell a more complete story, or do they sacrifice their own shows’ narratives to break new ground and pave the way for future creators?

At the same time and on the same network, Adventure Time (2010-2018) pulled a more explicit, less queerbait-y The Legend of Korra (see Part 1), waiting until the finale for a kiss between Marceline the Vampire Queen and Princess Bubblegum. Their romantic history was better set up and threaded through the show than Asami and Korra’s, with many fans deducing they’d dated in the past before the show confirmed it.

Needless to say, the longtime biggest cartoon in the world having a prominent LGBTQ+ kiss was a big deal (though it’s worth noting that by that point a huge chunk of Adventure Time’s fanbase were adults who’d grown up with the show).

Bubbline improves on The Legend of Korra’s post-show sequel stories too. Instead of graphic novels, Bubbline will be front and centre in the latest hour-long Adventure Time: Distant Lands special (called Obsidian) which will premiere exclusively on HBO Max.

The drama generated by getting rep into Cartoon Network’s shows continues to dissipate, and most recently Craig of the Creek (2018-) from SU’s head-writers Matt Burnett and Ben Levin has casually woven gay, lesbian and agender representation into its supporting cast. Craig is a sweet slice-of-life comedy that, similar to Nickelodeon’s The Loud House, normalises these identities and sexualities without making them a Big Deal.

Check out Part 3 of this series where I explore LGBTQ+ representation on Netflix, including Voltron Legendary Defender & SheRa and the Princess of Power!

Featured image courtesy of Fred Seibert via Flickr.com. Image use license here. No changes made to this image.