Few ideas in science have captured humanity’s imagination quite like the prospect of life outside of our own fragile sphere. The regular suspects come up time and time again—Mars, Europa, Titan, even distant Pluto—all boasting water ice or, even more tantalising, liquid water. Philippa Flanagan-Smith investigates a new discovery that has turned the gaze of exobiology towards something entirely different—the clouds of Venus.

On the 14th September, a paper was published in the journal Nature Astronomy detailing an investigation into the presence of phosphine (PH3) in Venus’ atmosphere, headed by Prof. Jane Greaves at Cardiff University. A colourless gas which is toxic to humans, phosphine is found in small quantities in the Earth’s atmosphere and is known to be produced primarily by microbial activity. This has led to phosphine being regarded as a “biosignature gas”. It’s this classification, as an indicator of biological activity, of life, that has made the discovery of phosphine in Venus’ atmosphere such a captivating mystery.

Why is life on Venus so improbable?

Venus is, to put it plainly, inhospitable to life as we know it. Its atmosphere is ~96% carbon dioxide and clouds of sulfuric acid blanket the planet in dense, complex weather patterns. The average surface temperature is over 460°c and surveys have shown evidence of that the surface was once extremely volcanically active, though is far less so today.

At present, it seems that there is no known abiotic explanation for phosphine’s presence in Venus’ atmosphere

Any water that may have once been found on Venus is likely to have evaporated millions of years ago, lifted into the atmosphere and torn into its constituent parts by the Sun’s rays. The lighter hydrogen ions would have then been blown into interplanetary space, carried away by the solar winds, never to return. It seems, at first blush, that there is no way for life to survive on a planet such as this. However, high in the atmosphere (at an altitude of ~50km), temperatures drop to a range of 30-80°c, much closer to what we experience on Earth. It is here, in these (still troublingly acidic, but much more temperate) clouds, that phosphine has been found.

What did they detect?

Prof. Greaves and her team used the James Clerk Maxwell Telescope (JCMT) in Hawaii to search for absorption lines in the spectrum of Venus’ atmosphere. An absorption line is a dark line found in the spectrum of light reflected from an object (be it a planet, an asteroid, a moon) which indicates that a specific wavelength of light has been absorbed by that object. Each absorption line is characteristic of a specific atom or molecule and in this case a line was observed at approximately the 1mm wavelength, indicating the presence of phosphine. 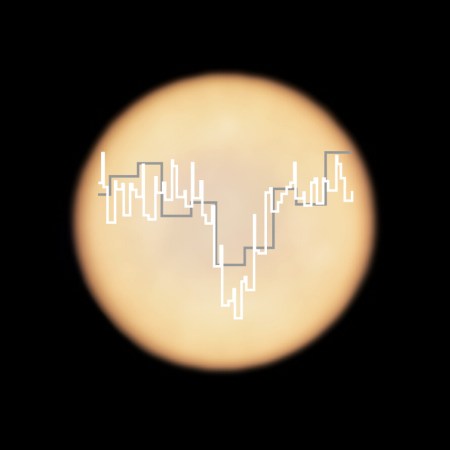 The paper also shows that the phosphine found in the atmosphere almost disappears at Venus’ north and south poles. This could indicate that the source of the phosphine is inside of the clouds themselves, following the atmosphere’s natural circulation as the clouds cool, condense and sink near the poles, then warm, expand and rise again towards the equator.

What conclusion did the team come to?

After the detection of phosphine was confirmed with a second independent measurement by the Atacama Large Millimetre/submillimetre Array (ALMA) in Chile, biochemists from Massachusetts Institute of Technology (MIT) were employed to help rule out known abiotic (non-biological) methods for producing phosphine.

Researchers studied known pathways, such as the high temperatures and pressures which account for the phosphine observed in Jupiter’s atmosphere, as well as more exceptional cases such as lightning activity and contamination by meteors. All of the production routes tested and modelled were found to be up to 10,000 times too weak to produce the amount of phosphine observed and so, at present, it seems that there is no known abiotic explanation for its presence in Venus’ atmosphere.

Not necessarily. Unfortunately, the presence of phosphine is merely an indicator that there might be life present, not a definitive confirmation. The paper itself admits that the levels of phosphine observed on Venus are thousands of times smaller than those observed on Earth and that its presence may be due to “unknown photochemistry or geochemistry.” There is much about the Venusian atmosphere that is yet to be discovered and it’s still unclear as to why organisms that have evolved on Venus (where their biology would need to be based around sulfuric acid, rather than water) would even produce phosphine to begin with. The essence of the situation can be summed up by a recent tweet from NASA research scientist Dr Jessie Christiansen:

Okay, here's what I told folks who asked about the detection of phosphine (PH3) in the atmosphere of Venus: If you give me the options of unknown chemistry, unknown geology, or unknown biology, then biology is always going to be a distant third behind the other two options.

The next step towards conclusively answering these questions would be to send an atmospheric probe to Venus. This could be similar to the balloons used in the Vega missions of the 1980s, performing in situ analysis of the atmosphere, or, even better, could be a returning mission, bringing samples back to Earth for analysis. While either of these options might still be a way off (the next mission due to come close to Venus is merely a flyby from the ESA’s BepiColombo on its way to Mercury), enthusiasm around the search for extra-terrestrial life is still as keen as ever. This investigation is sure to bring Venus back into the public eye and into the considerations of future exobiological research.

Please Take Your Seats (In The Comfort Of Your Own Home)

Practice What You Preach? Why Fashion Influencers Shop Fast In The Face Of Our Climate Emergency.