The Crisis In Catalonia Is One We’ve Seen Before 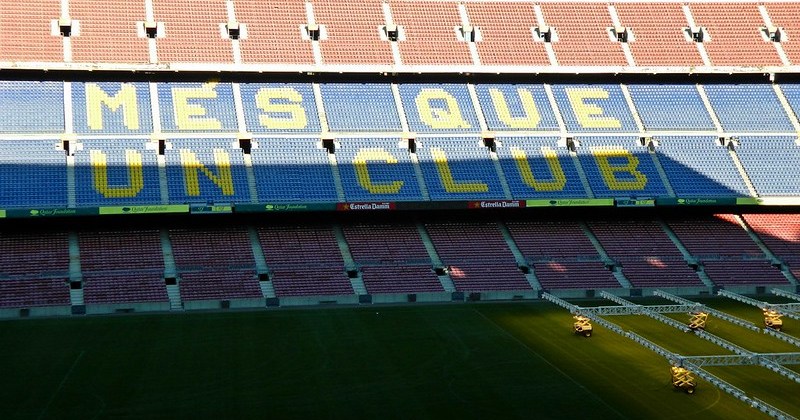 To any other team, a Champions League quarter-final finish, 2nd place in their domestic league, and a quarter final finish in their domestic cup would deem a successful season. However, for the Catalonian giants FC Barcelona, not only has this season signified a turning point in the club’s reputation, it has driven away their ‘miracle from God’ Lionel Messi. These words from teammate Arda Turan barely do justice to what he has done for the club, and the fact he has decided to hand in his transfer request reinforces the decay. Elijah Trevers takes an in-depth look at Barcelona’s all too familiar decline, and prospects for their future.

The appointment of Pep Guardiola in 2009 saw the birth of an unplayable Barcelona team, world-renowned for their simply named ‘Tiki-Taka’ style. It is fair to say the players singularly and as a team outshone any other in world football. They picked apart the best teams in the world and had 2 Champions League successes under Guardiola. This Barcelona team also formed the spine of the formidable Spanish National Team that won back-to-back World Cup and European titles.

When I look at the Barcelona teams of the early to mid-2010s, I see teams that are solid and uniform, players that complement each other with no weakness in any position. Taking a look at the 2014/15 season, we see Pique, Xavi, Suarez, Neymar, Messi; world-class players in a team completed with quality players alongside. This mix of hardcore leaders at the back and flair and finesse further forward resulted in an unprecedented season quadruple for the football giants: La Liga, Champions League, Copa del Rey and Supercopa de Catalunya champions.

On their way to this Champions League victory they defeated PSG, Manchester City, Bayern Munich, and Juventus in the final. They dominated the best teams from each country, losing only two games throughout the competition and only 6 games the entire season. Player quality was second to none, and was matched by the staff and managerial prowess of Luis Enrique. During his short stay at the club, Enrique won the league twice, the Champions league, the Copa del Rey three times, the Supercopa de Espana, the FIFA Club World Cup and the UEFA Super Cup.

Fast forward to the present day, the team that played against Bayern Munich in arguably Barcelona’s most embarrassing modern day defeat is a shadow of the teams that played from 2012-2016. The reason for ‘prime’ Barcelona’s success and untouchable aura is because of their style of play, their ability to average 69% possession a season and to not only perfect their art of passing, but make it enjoyable to watch. It seems that the board and coaching staff were resting on their laurels, hoping their players that played famously beautiful football would last forever. Their attempts at replacements for the likes of Puyol, Xavi, Iniesta, the backbone of the team have not worked out as well as they would have hoped, and this has now taken its toll on Barcelona.

The crisis we see unfolding in Barcelona mirrors what we saw unfolding in North London in the late 2000s and early 2010s. This Arsenal team failed because they were unable to replace the pure class they had in their ‘Invincibles’ side when the time came for them to leave the club. The legends of Wenger’s early, successful years grew old together; the likes of Henry, Adams, Bergkamp and Viera, none of these players ever truly got replaced like for like, and the team suffered as a result.

Just like how Arsenal attempted a rebuild, through big money signings such as Ozil and spending £100m in both 2011 and 2012, Barcelona have tried to spend big in order to recover from their personnel losses. Three players in 3 years, all costing over £100m each in Dembele, Coutinho and Griezmann signifies how Barcelona sacrificed good business in order to replace their stars of the past.

Dembele has scored 12 goals and achieved 12 assists in 51 games at Barcelona, disappointing for a player who was brought in at a price that warrants far more than that. Likewise, Coutinho played 76 games, scoring 21 goals and 11 assists. His impact in Barcelona proved to be far inferior to his impact in Liverpool, where he was seen as a modern day legend before he left. For me, the numbers don’t lie, you have to look no further than those stats to see that the decline of Barcelona over recent years has rubbed off on the big name players they have brought in to fix this.

Barcelona’s president, Josep Bartomeu, has the final say on everything that goes on in the club, on who signs and who goes, which ultimately suggests that a lot of their recent deterioration can be put down to him

As the decline of world class, solid players continues at Barcelona, the standard of managing has also deteriorated. Quique Setién came to the club at the start of the year having finished 6th with Real Betis the year prior. As good as this was, it is hardly a CV that warrants the Barcelona job given the disparity between the two clubs. He had no success whatsoever at Barcelona, and his dismissal in the days after the 8-2 loss to Bayern Munich showcases how poor of a fit he was.

The appointment of Ronald Koeman may seem equally disappointing for Barcelona fans, especially following rumours of a return of Xavi or Guardiola. Koeman’s managerial portfolio certainly does not represent one that is worthy of such a huge club. However, he has a major advantage in being a former player and coach at Barcelona. Bringing back ‘one of their own’ as a manager is a move several big clubs have lately made. Consider Zidane at Real Madrid, the job Frank Lampard is doing at Chelsea, or the influence Mikel Arteta has had at Arsenal; it is clear that sometimes you do need to go back to your roots to achieve success.

Barcelona’s off-pitch failures don’t just stop at the touchline, those higher up are also bringing bad news to the club. Barcelona’s president, Josep Bartomeu, has the final say on everything that goes on in the club, on who signs and who goes, which ultimately suggests that a lot of their recent deterioration can be put down to him. Precise examples and analytical examinations will point you in the direction of the opinion that Barcelona are decaying, however it saves a lot of time and effort by just pointing out that their poster boy for the last 20 years, the best footballer player in the world, has requested to leave.

Messi has a goals/assist to game ratio of 1.25, his contributions on and off the pitch have helped propel the stature of Barcelona. The Catalonian President himself has defined Barcelona as Messi and Messi as Barcelona. Him leaving the club, it is clear to see, will leave a dent in Barcelona as a football club and as a community forevermore. The question left now to ask is, where do Barcelona go from here?

Despite him being the central figure, a move away is looking likely, so they should be preparing for a future without him

I believe the appointment of Koeman is a short term answer that will not work. If they decide to sell Messi for their £600m asking price, with the right people at the top of the club, I feel this money could be spent very wisely on reorganising the team. Despite him being the central figure, a move away is looking likely, so they should be preparing for a future without him. This is the future that Font has been talking about in the lead up to next year’s election, which is very positive, realistic, and fresh to see. If he wins, which seems likely, and keeps his promise of bringing either Xavi or Guardiola back, I see the rebirth of Barcelona.

Featured image used courtesy of Rafael Curtinaz Severo via Flickr. No changes were made to this image. Image use license here.

In article image 1 courtesy @fcbarcelona of via Instagram. No changes were made to this image.

In article image 2 courtesy of @fcbarcelona via Instagram. No changes were made to this image.

September Book Of The Month: Jonathan Strange And Mr Norrell