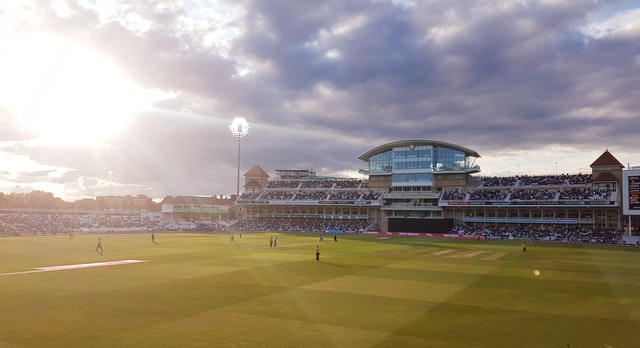 Captain Fantastic Dan Christian led from the front as he took 4-23 to help reduce Surrey to 127-7 from sixteen overs. This is captain Christian’s fourth T20 blast title during his time in England.

The Aussie, who hit four sixes in a row against Lancashire Lightning in the semis, then helped to steer Nottinghamshire home with the bat. Christian hit 21* off 18 balls in a partnership with Ben Duckett, who made a superb, quickfire 53* off 38 balls.

Former Northants opener Duckett kept a cool head as wickets tumbled around him. When Alex Hales was dismissed, Nottinghamshire were stuttering at 19-3. Partnerships with Peter Trego and then Christian turned the tide. Ben Duckett played with natural confidence and aggression, hitting strongly over the leg side to remind England selectors of his credentials in the shortest format of the game.

The Nottinghamshire opener told the media after:

“I’m so happy for us today. After just missing out last year in such a tight game, tonight was such a good feeling, we learnt from last year. It was a slight shame no fans were here but hopefully the Notts fans are happy”.

As Duckett said, Nottinghamshire righted last season’s wrongs: a collapse in the last over that saw them bow out in the semi-finals against Worcestershire Rapids. The Outlaws had made the final thanks to a nail-biting win over Leicestershire in the quarters before Christian’s star turn against Lancs in the semis.

Surrey were put into bat at Edgbaston and struggled to start. First, Patel got rid of South African legend Hashim Amla. Jake Ball, the competition’s top wicket taker with 19, removed Ryan Jacks. Duckett took both catches. The signs looked ominous for Notts though when Surrey and England opener Jason Roy put on a big partnership with Laurie Evans. Roy, who was dropped by Peter Trego at the start of his innings, smashed the bowlers for 66 off 47 balls.

However, Nottinghamshire wrestled back control. Jake Ball trapped Jason Roy lbw to make Surrey spiral out of control. Dan Christian picked up his fourth wicket as the Brown Caps made just eight off the final nine balls. The moment of the match came when Notts wicketkeeper Tom Moores made an extraordinary diving catch to send Jamie Overton back to the pavilion for 0. The 24 year-old pounced acrobatically to snaffle the ball high above his head off Christian’s medium-pace bowling.

Nottinghamshire’s reply started badly. Alex Hales hooked a poor shot to fall to Reece Topley. Then Surrey’s Jacks spun out Joe Clarke and Samit Patel to make amends for his poor showing with the bat. But Duckett came into his own to hit a match-winning half-century, which included smashing Jamie Overton and Liam Plunkett all over the ground as Notts put on 29 in just two overs.

Veteran Peter Trego provided invaluable support with 31 from 29 before mistiming a reverse sweep.

Enter Dan Christian to the middle. With 46 runs needed, the Nottinghamshire captain and his opener chased the Surrey total down assuredly. And it was wholly fitting that man-of-the-match Ben Duckett hit the winning boundary to spark celebrations from the bench.

Featured image used courtesy of Steve Clayton via Unsplash. No changes were made to this image. Image use license here.

In article image 1 courtesy of @trentbridge via Instagram. No changes were made to this image.

In article image 2 courtesy of @trentbridge via Instagram. No changes were made to this image.

From Motor-Mouthed Rapper To Pop-Punk Paladin: Machine Gun Kelly’s ‘Tickets To My Downfall’