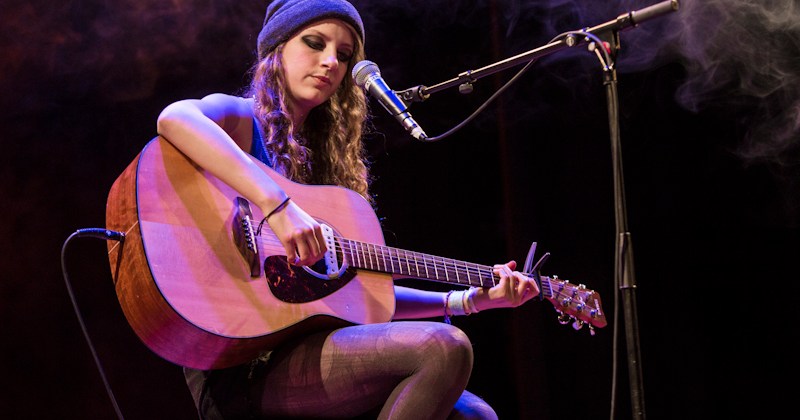 Annie Eve brought her ethereal folk rock set to Bodega and utterly mesmerized the crowd with her songs of heartbreak and sour relationships.

With an immensely popular and much talked about appearance at Glastonbury this summer, it was a sin how few people turned up to see Annie Eve perform at The Bodega. The ones who did, however, walked out feeling pretty smug about knowing they’d seen an artist on the brink of a breakthrough. Don’t let the incessantly overdone and annoyingly vague description of ‘singer-songwriter’ put you off. This isn’t some 17 year old from the Home Counties pretending to know about life and love and thinking she’s defo got what it takes to be the next big thing because she can play ‘Wonderwall’ on guitar and has 250 subscribers on YouTube. Annie Eve, ladies and gentlemen, is the real thing. Her lyrics are poignant, her melodies stunning. Go listen to ‘Basement’ on Spotify and see what I mean. Ethereal loveliness.

While you wouldn’t exactly describe Annie Eve’s stage presence as what Louis Walsh might call ‘owning it’, her backing band more than compensated enough for this not to be too pressing an issue. A drummer, an electric guitarist, a bassist and a surprising addition of an accordionist all accompany Annie’s acoustic guitar to create a full bodied background to the main show, with incredibly beautiful harmonies. The lady herself swapped her acoustic for an electric guitar towards the end which led to the set taking an unexpected but exciting turn. Eclectic, electric and at times eerie, this show was immensely enjoyable and advice for fans of Daughter and Bon Iver, would be to catch her before she makes it big.

For more from Impact Music, check us out on Twitter