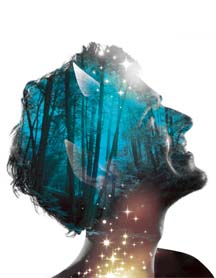 Magical, mischievous and modern. The much anticipated third collaboration between Nottingham Lakeside Arts’ and The Nottingham New Theatre certainly did not disappoint. Taking on one of Shakespeare’s most beloved plays ‘A Midsummer Night’s Dream’ and trying not to fall back on tired old clichés is a serious challenge for any production. However, Martin Berry’s direction and phenomenally strong cast ensured that this particular production was pushing boundaries.

The audience is first greeted by an enchanted forest on stage, and a childish, lyrical Puck (Laura Jayne Bateman) playing on the forest floor. Designer Dorrie Scott created a magical set. From the branches hanging from the ceiling concealing fairy-lights, to the drapes of delicate fabric acting as the trees, the audience were placed in the heart of the story from the very beginning.

The whole cast were incredibly strong. Mastering the language of Shakespeare is no mean feat and they all delivered their lines with conviction and clarity. Though at times the dialogue was lost due to the fast paced movement on stage. The stand out performance though has to go to Ben Maries as Bottom. His portrayal of the over-confident yet slightly simple Bottom brought the audience to tears with laughter at some points. Particularly of course after his transformation to an ass and subsequent amorous attention from Titania (Rachel Connolly).

Yet, what underpinned the entire show and created the dreamlike atmosphere was the music. Composed by Manuel Barenz, the live music, played on the grand piano on stage, was extraordinary. In particular, every time Oberan (Emily Brady) or Puck cast a spell the same magical refrain was played. This provided much needed continuity in a play so fast-paced. I also really enjoyed the singing that was introduced; first by Puck in sending Titania to sleep, and then by Bottom after his transformation. These two added songs were very different yet both added an extra layer to the play that all other productions have lacked. It once again demonstrated the production successfully pushing boundaries.

Some boundaries however should not be pushed quite so hard. Whilst I loved the outright madness and hilarity that ensued along with the countless dirty innuendos during the actors of Athens’ final performance at the wedding feast, the modern dance music and dancing just lowered the tone. Adding modern elements to old plays is a great way of keeping modern audiences entertained. But this ran the risk of overpowering the enchanting atmosphere that had been so carefully cultivated from the beginning of the performance with the live music and set design. The show was almost derailed at the final hurdle.

The show was almost derailed at the final hurdle

Having said that, the quick return to live piano music and Puck’s impish ending to the play ensured that the audience left remembering the overall magic of the play, and not just with ‘Uptown Funk’ in their head. As one audience member said on leaving the theatre “this was the funniest production I have ever seen”. And I have to say that I agree with him. Despite the near derailment.

‘A Midsummer Night’s Dream’ is running at Lakeside Arts Centre until Saturday 2nd May. For more information see here.