Pint of Science: The Rise of the Machines

The disconnect between the general public and the scientists whose research they fund is a constant source of frustration on both sides. Opportunities to bridge this gap are few and far between, with most members of the public feeling either totally disengaged with science or, at best, assuming the work being carried out is so abstruse as to be irrelevant in their daily experiences. However, this week has seen a packed schedule of events specifically designed to break down these stereotypes and get people excited about science.

This was the first week of talks by the Nottingham chapter of the nationwide organisation Pint of Science. A collaboration with the Science Outreach Society, these events brought together PhD students and senior academics to give short talks on their research in four different venues across the city centre. Monday’s event in Missoula showcased a range of the most exciting technologies currently being developed. There were even students from our very own additive manufacturing group on hand to provide practical demonstrations. 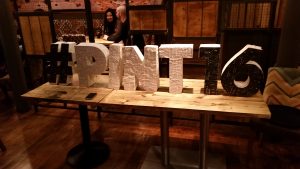 First up was Loughborough University’s Joanna Turner, a computer science student working on the travelling salesman problem with a robotics twist. Her work involves communication between robots in a distributed system, trying to come up with a formula to best allocate tasks based on a variety of factors such as battery life and the importance of particular tasks. Joanna described the various challenges in the field, such as the difficulty in getting machines to relate disparate problems to each other and their ability to weigh up opportunity costs. She intrigued with examples of work being carried out in Texas on a robot lifeguard and another on a machine to search for survivors after natural disasters.

The next speaker was Dr Adam Clare, Associate Professor of Advanced Manufacturing at the University of Nottingham. Before beginning his talk he lauded the organisers of the event and underlined the importance of such talks in communicating research to the general public, especially as most innovations are in fact paid for by the public sector.

Clare presented an article from a 1956 edition of Popular Science in which a group from MIT was using a computer to control power tools. It proclaimed that “in ten years everybody will have a furniture printer in their garage”. Poor journalism aside, Adam described recent advances in the field of 3D printing, such as the production of parts for jet turbines at Rolls Royce, the major economic powerhouse of the East Midlands. Also, with a currently ageing population, the demand for printed biomaterials such as hip joints is dramatically increasing. The pet industry is also getting in on the act. Adam commented afterwards: “The new generation [of scientists] are specialists, able to better apply the technique of 3D printing to their specific problems, quite different to my generation who were just playing around with metal and lasers”. 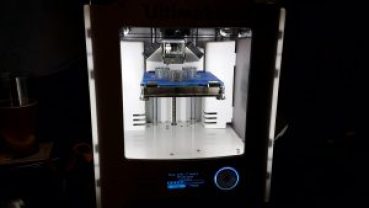 The final speaker of the evening was PhD student Adam Thompson, also from additive manufacturing. Adam works in the field of metrology; essentially, the science of measurement. In an amusing aside Adam challenged a member of the audience to cut a stick to within ± 5cm of 1 metre for a pint, the catch being the volunteer was not allowed any measurement equipment at all. Naturally, the man fell well short which proved Adam’s point of the importance of standardised measurements.

“Science doesn’t always have to be serious”

Perhaps the most interesting single fact of the evening was the definition of the metre, which apparently is the length of the path travelled by light in a vacuum during a time interval of one, divided by the speed of light. There remains a platinum bar in Paris known as the mètre des Archives which celebrates the completing of the survey which led to the original determination of the value of one metre.

Adam explained his work in understanding how to obtain reproducible measurements in 3D printing. Atmospheric conditions can change drastically day to day which can affect the outcome of printing procedures in unpredictable ways. As part of his initial experimentation, a Chewbacca lego toy was the obvious choice for a model. It was placed in a C.T. scanner and a perfect 3D image was obtained. Science doesn’t always have to be serious.

“The event underlined the importance of communicating research to the general public, especially as most innovations are paid for by the public sector”

The talks were followed by a lively Q&A session covering topics as varied as patent law in 3D designs, the economics of handmade goods and whether printing your own gun is a good idea (“Hell no” was the answer from the audience).

The enthusiasm for the event was clear, from the number of people looking and playing with the prototypes brought by the additive manufacturing department to the numerous questions posed to the students at the stall.

Team leader Tolu Taiwo was thrilled with the success of the evening. “It’s amazing to be able to bring our work to people and share our passion for science. We have a very ambitious program with twelve events in Nottingham over these three days, especially as this is our first year, but the response has been amazing”.

“We hope we’ll carry this success into next year”, he added.