It was victory in the main sports hall of the David Ross Sports Village for the University of Nottingham’s (UoN) Badminton team over local rivals Nottingham Trent University (NTU) last week. In this Super Wednesday event, there were 17 different matches, with UoN taking victory after an impressive 14-3 win, helping to secure a Wednesday whitewash for the Green and Gold.

The atmosphere was fantastic down at one end of the sports hall with a good crowd having turned up to watch the badminton. In truth, as expected, the event was not much of a contest and only briefly whilst the score was 1-1 very early on were Trent in contention.

By the time the 10th game had been played, UoN had already secured the point, leading 9-1 with only 7 games to spare. UoN’s dominance over their rivals continued with Trent only picking up a second consolation match win at 12-1 down. 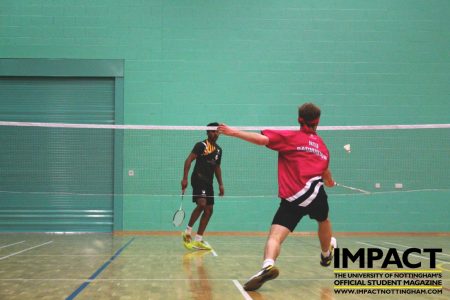 Despite the very one sided affair, it was Trent who had the last laugh, winning the final mixed doubles match to take a third match and a third point on the scoreboard. However, the last match will be remembered as a showcase of what the Varsity series is about. Both sets of fans had come down from high above to sit court-side and cheer on their teams in the last game, even though the contest was over. 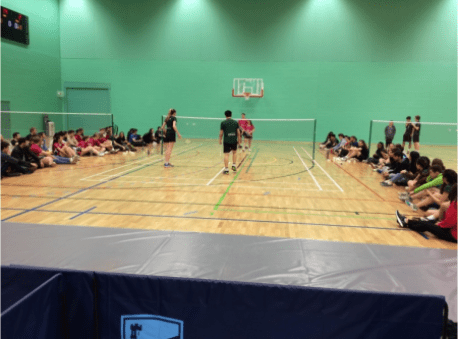 Badminton coach Martin Ellis told us just before the finish that Super Wednesday is great and that a sport like badminton never receives anyway near the levels of support they received on Wednesday in their normal BUCS fixtures. Additionally, he said that although they were anticipating a closer affair, “the guys had come out and played really convincingly today”.

UoN badminton also received praise from many supporters as they rotated their squad for this final match of the series. Several players from the women’s 2nd and 3rd team competed in the event. 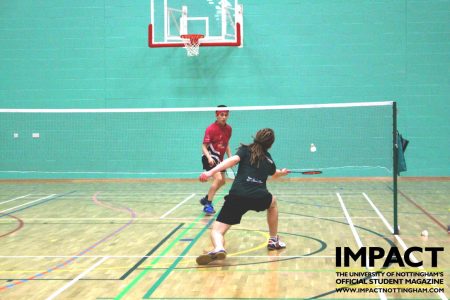 ‘Sad to be leaving’

President of Badminton, Ellen Liddle, said that she was delighted for those guys who would not usually get to play in the Varsity series. She also mentioned that she was graduating this year and was very sad to be leaving the club after several years. This must be the icing on the cake for Ellen herself and badminton as a whole, after what has been a very successful season and few years for the club.

All in all, the result is important in deciding who wins the Varsity series, as UoN badminton helped secure a whitewash on Super Wednesday and claim an extra point to lead 5-3 overall. However, the badminton event was about much more, and bringing both sets of fans down to the court for the final match was a fitting end.