It was another glorious day down in the pool for the University of Nottingham’s (UoN) swimmers, against their Nottingham Trent University (NTU) counterparts. The event was action packed with over 30 races of all kinds, with both the men and women competing. Before the event, UoN were predicted to win, especially given recent Varsity series results, and they duly delivered, taking the point in Super Wednesday by a score of 149-89.

The result followed the trends of recent varsity swimming events. For Nottingham Trent it was definitely an improvement on last year’s fixture, at which they only achieved 71 points. Across the board they had some good athletes, but as a team they were never predicted to challenge UoN in the pool on Super Wednesday.

It started really well for UoN as they won both the men’s and women’s 50m relay medley, giving UoN an early lead in proceedings. This set the scene from here as UoN won most of the races on the day, with only a few isolated wins for Nottingham Trent.

The climax of the whole event was the very last event – the 8x50m skins. The 4 best swimmers from each team competed in the race, with the slowest swimmer in each round getting knocked out. The atmosphere rose significantly as the event concluded in stunning style with UoN winning both races in style. 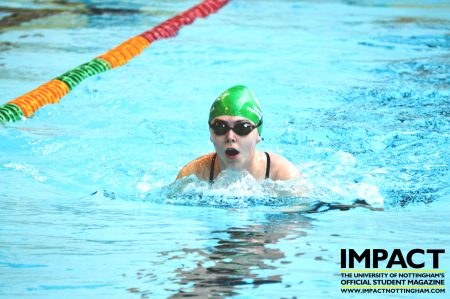 The attendance at the event was very good and it is surprising to see that swimming has been placed on Super Wednesday. When looking at the support of both teams, this event could definitely go back to having its own slot on the Varsity calendar in future years.

Overall, the result was as expected and predicted before the event. However, this does not detract from the efforts and performances from all the UoN swimmers who took part. They must be delighted with another Varsity win which has helped them claim a point for UoN on a victorious Super Wednesday.