After making her name as part of the mumblecore movement (a term she detests), Greta Gerwig turns to directing her own work with Lady Bird.

Although not much is known about the film’s plot, the trailer shows us a young student named Christine (Saoirse Ronan), who is dissatisfied with her life. She wants to be surrounded by intellectuals, living a sophisticated, cultured life on the east coast, but she can’t seem to find a way into it – and a strained relationship with her mother (Laurie Metcalf) doesn’t help.

It may seem naïve to already be excited about a film that hasn’t even got a UK release date yet, but its world premiere at the recent Telluride Film Festival has elicited a flurry of stellar reviews, already sparking awards hype around Saoirse Ronan’s performance.

As a long time fan of hers (she managed the oft-treacherous transition from child actor to more grown up projects seamlessly, with such an eclectic range as a Wes Anderson crime-caper to her upcoming turn as Mary, Queen of Scots) I think it would be wonderful if she were to be nominated at the Oscars again, if only so that she continues to try her hand at so many genres and styles.

“Gerwig’s directorial debut is shaping up to be … dramatic, funny and honest”

However, while Ronan leads the film, it’s important to note that a truly superb cast supports her. In fact, it’s impossible not to point out the influence of Broadway on the combined careers of the troop that Gerwig has gathered.

From Laurie Metcalf, coming off a recent Tony win for her performance in A Doll’s House, Part 2 on Broadway, to Beanie Feldstein, currently playing Minnie Fay in the much-lauded revival of Hello Dolly!, and from Lucas Hedges’ off-Broadway performance in Yen, to Tracy Letts, an award-winning playwright and actor, the film is packed with stars of the stage.

It’s difficult to decide whether this is coincidence or intentional – considering Gerwig’s early ambitions to be a stage-based performer, I’m leaning towards the latter. Whatever the reason, it will be interesting to see whether the film itself is reminiscent of a play. 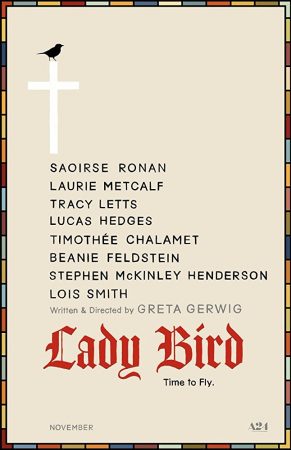 All in all, Gerwig’s directorial debut is shaping up to be a dramatic, funny and honest portrayal of a young woman inevitably coming of age. Whether audiences respond to Lady Bird in the same way as critics is yet to be seen, but with a line-up this good, I wouldn’t be worried.