Manchester City have enjoyed the best start to a season in the club’s recent history. With a total twenty-eight points from their first ten games and an unbeaten start in the Champions League, the Citizens are currently one of the most in form teams in world football. Yet are they as invincible as they might first appear? In several games this season, different issues have surfaced in City’s team. If all were exploited, Pep Guardiola’s all conquering side might suddenly come undone.

First, let’s look at how they are likely to set up at the moment. Whilst Guardiola has switched his players and made slight adjustments in his system, the Spaniard has set his team up in a 4-3-3 that at times resembles a 2-3-2-3 when City counter-attack. The full backs will likely move forward on the attack into the midfield whilst the front three will aim to drive into the box with quick passing and pace.

Agüero reflects on his record-breaking evening in Naples ???#UCL pic.twitter.com/7gxmPHvxau

Next, the issue of how to stop the free scoring attackers of the Sky Blues is imperative, so the type of marking a defence uses is key. Specifically, the two real choices are to deploy a zonal marking style (defenders assigned to cover a specific area of the pitch) or a man marking approach. The debate has raged recently as to which style of defending is better in the current game – but against City, there is a clear winner.

The Sky Blues have shown they are able to utilise any area of attacking space afforded to them, making a zonal system redundant. As the creativity David Silva, Kevin De Bruyne and the in-form Raheem Sterling provide from deep enables Leroy Sane, Gabriel Jesus and Sergio Aguero to concentrate solely on drifting off defenders into gaps. A man marking style is best suited as the defenders, specifically the full backs, should force the wide men of Sterling, Sane and Bernardo Silva out to the touchline and prevent them cutting inside. 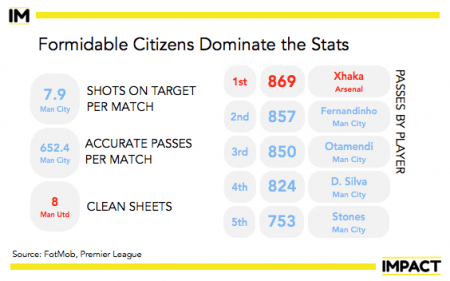 Key to City’s play is Kevin De Bruyne. Despite Guardiola’s rotation of his squad, the Belgian has started almost all of this seasons games and has been deployed on the right of a midfield three. De Bruyne has often shifted to the right when Kyle Walker makes overlapping runs and moves into the centre of the park, often confusing defenders and holding midfielders, enabling the Belgian playmaker to move into space and find attackers with his exceptional distribution.

De Bruyne is arguably the best midfielder in the Premier League and a playmaker to challenge Real Madrid’s Toni Kroos for the title as world’s best. An athletic defensive midfielder therefore should be used to man mark the Belgian out of the game, pressing him when in position whilst the defenders move to cover and negate his passing options. Whilst his composure on the ball is highly developed, constant harassment of De Bruyne will keep the playmaker preoccupied and create opportunities to exploit a mistake he might commit as the game draws on.

City’s defence has also found a rigid and settled shape and structure, but as has been shown in games were they face a front three that includes two wide players who remain high up the pitch, they can be exploited. City’s wing backs of Walker and either Fabian Delph or Benjamin Mendy will remain close to the defenders but drift wide and create gaps between them and the centre backs for other players to run into. There are also problem areas between the centre defensive midfielder of Fernandinho, John Stones and behind him towards Ederson due to all three being keen to push out of their areas and move higher up the pitch in order to close down their opposition. This leaves gaps for fast forwards to run in behind and be clear on goal.

Whilst these areas of concern in Manchester City’s current line up do present some chinks in an otherwise extraordinary team to watch, it will require a highly disciplined opposition to fully exploit these points in the team. Time will tell where this team ranks amongst the best of Premier League history but if these trouble areas are resolved by Guardiola’s tinkering, then they could very well become unstoppable.

Behind the Scenes at NNT – Over There

Here To Listen: An Interview With Nottingham Nightline