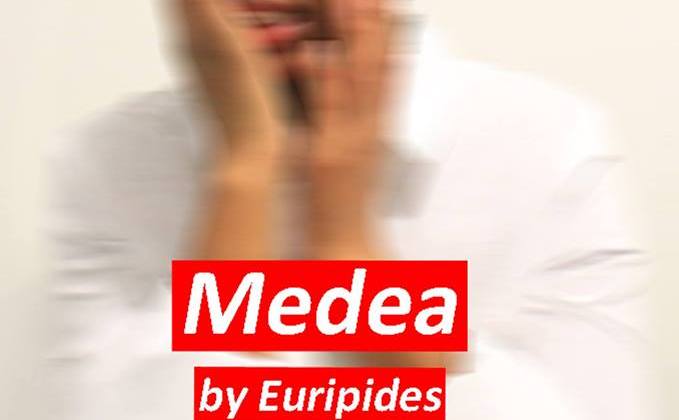 Medea is a Greek tragedy written by Euripides and first performed in 431 BC, therefore it has a long legacy of performances and adaptations. With this performance in particular, the director (Emma Fearon) and producer (Emily Wong) have chosen to alter the tragic Greek conventions in some ways to appeal to a modern audience. Even in its original Greek context, the play was known for being controversial, and it continues to both astonish and horrify audiences today.

The plot is focused around main character Medea (Jazmine Greenaway), a foreign woman living in the city of Corinth with her two young sons. The audience learn from Medea’s nurse that Medea’s husband, Jason (William Tilett), has disastrously betrayed her by agreeing to marry King Creon’s daughter, the Princess Glauce. Medea is emotionally and mentally distraught, with her anger and jealousy sending her into a spiral of madness which leads to a highly destructive path. The entire performance is narrated and observed by the chorus, the Women of Corinth, played by Ellie Roberts, Ellen Dennis, Megan Openshaw and Hannah Yates.

I found the start of the play slightly confusing. As the audience entered, the four chorus members were sat on a child’s play mat that stayed in place for the whole performance, playing with toys and with infantile music on in the background. As you can imagine, this wasn’t part of Euripides’ original script, and I didn’t understand its significance as an audience member or feel that it added anything to the play.

The audience were positioned in a thrust stage which meant they could see each other from opposite ends of the stage, this feature is reminiscent of a Greek amphitheatre in some ways, where the audience would have been aware of each other and were sat raised above the performance space. The close proximity of the audience and the actors was engaging and allowed the spectators to feel involved in the performance. Also, the simple set kept the audience’s attention on the actions of the characters, rather than the staging acting as a distraction.

I particularly enjoyed how this production used gestus (gestures and body movements) to reflect the inner conflict of the chorus and add a visual aspect to the emotion and drama of the plot. The choice of having the chorus act and speak in unison, which is a typical Greek convention, was very compelling. As a tragedy, it is not surprising that the show was incredibly dramatic, passionate and intense. Despite a few mistakes in the delivery of lines, the quality of acting was generally strong, and especially impressive since it was the first production at Nottingham New Theatre for all six of the actors. The use of multi-roles of characters worked well, with props and aspects of costume helping to differentiate between various characters.

The use of lighting was interesting in the performance, a white wash was used for most of the performance, but red spotlights were used at pinnacle moments. This was particularly effective in highlighting the tragic and dramatic turn of events, and portraying Medea’s rage and mental deterioration. However, I felt that the lighting could have been used more powerfully at the end of the play when Medea emerged from the back doors in blood-stained clothing. At this point in the play, Medea is supposed to rise to join sun god Helios in a golden chariot. Although I understand that this is very difficult to present on a simple stage, it may have been better to elevate Medea above the other characters on a platform to demonstrate her victory.

Overall, NNT have done a good job of making Medea accessible to a modern audience, reminding us of the shockingly relevant topics of adultery, divorce and the repression of women. Although this play isn’t for the faint-hearted, it will certainly leave a lasting impression on all those who have the chance to see it.

Tennis is too tough for its stars