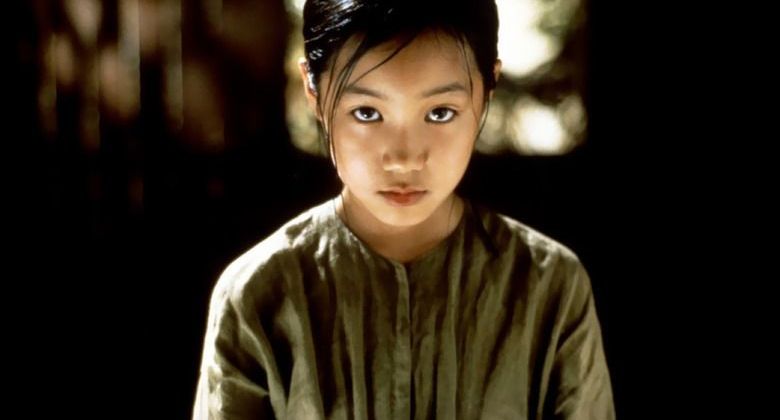 The Asian Film Bucket List has taken us from a jarring Japanese thriller, through an intense Indian social commentary, all the way to a sharp Singaporean rom-com. So how better to round off the rave reviews than with an aesthetically pleasing arthouse piece from our final destination of Vietnam?

Much like its name, The Scent of Green Papaya unites sensuality with simplicity. The tale of ten year old Mui (Man San Lu) who is sent to work for a well-off family plays out with quiet confidence under the eye of Vietnamese-French director Tran Anh Hung. Lack of ample dialogue is compensated for by images rich in meaning, revealing inner truths about the main characters that they have yet to grasp.

The Scent of Green Papaya opens with Mui walking down a residential street in 1950’s Saigon. The mise-en-scène offers a mixture of the old and the modern-a lantern rests not far from an electric shop sign, someone sleeps on a simple makeshift bed next to a cluster of bicycles. Mui enters this ever-changing world as a servant to a household of three generations. It initially seems functional, save for the tension that prevails between husband and wife due to the death of their daughter.

The first half hour of the film depicts how Mui learns domestic skills, such as cooking and cleaning, under the guidance of another worker (Anh Hoa Nguyen). While such scenes would normally run the risk of boring us, Tran Anh Hung uses framing to much the opposite effect. Characters are often shot through things, whether it’s a thicket of leaves, a window or the wooden bannister’s of a staircase. A constant threshold is maintained between us and the lives depicted on screen, so we must actively try to peep into them.

Mui is treated well by the mistress of the household (Thi Loc Truong), whose personal troubles serve as a focal point for the former part of the story. Her husband leaves home with the family savings to indulge his selfish desires, while her callous mother-in-law blames her for his sudden flight. Such moments of domestic intensity are offset by the mischievous antics of the family’s youngest son Tin (Gerard Neth), who is intent on making Mui’s chores as difficult as possible, even going so far as to prank her with a large lizard.

A particularly striking feature of The Scent of Green Papaya is its near constant atmosphere of peace. Despite being set during the Vietnam War, Tran Anh Hung chooses to feature the sound of chirping crickets and birds more often than that of curfew sirens. The film’s visual motifs are also based in the harmony of the natural world. Most prominent among these is the eponymous green papaya and its juice, which Mui frequently uses not only to cook, but to nourish insects that she captures as well. Aside from the obvious phallic connotations which foreshadow the film’s increasingly sexual themes, these scenes bring to light Mui’s intuitive understanding of, and kindness towards, almost anything she encounters.

The latter part of the film is set ten years after Mui joins the household. She is treated like a daughter by the now invalid mistress, but finances are bad and her services can no longer be afforded. As a result, she is sent to occupy a new position at the home of young musician Khuyen (Hoa Hoi Vuong). Through her wordless interactions with Khuyen, Mui finally comes to get the life she deserves in an ending that sustains the mild and sweet trajectory of the film thus far.