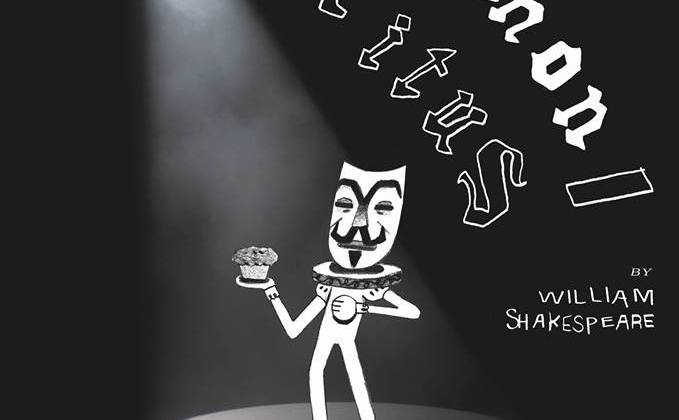 Curiously abstract and startlingly original, Timon/Titus is a savage exploration of the themes of debt and guilt. Based loosely around the Shakespearean tragedies Timon of Athens and Titus Andronicus, this new play presents the audience with a series of stark moral questions, each depicted through multiple layers of outright debate and bloody melodrama. Translated from its original French by director Ben Standish, Timon/Titus draws upon such contemporary issues as race, gender and market capitalism in its mission to leave the audience questioning the world around them.

Indeed the play’s abstract nature is perhaps one of its greatest strengths. Timon/Titus has no set plotline, but focuses entirely on exploring the great question set out in its opening lines: ‘Should we always repay our debts?’ Via a series of on-stage debates between fictitious versions of the actual cast and a daft but bloody domestic drama acted out beneath the guise of Shakespeare, the actors ruthlessly pick apart the concept of debt and every one of its social, political and economic consequences.

Of course there is a danger here that, particularly with this being student drama, the message put across as overly preachy. Yet Timon/Titus avoids this entirely. Yes, at one point the cast actually lectures the audience on the topic of free trade and yes, every scene in the abstract domestic melodrama (largely concerned with the idea of inheritance) results in grisly murder, but the dialogue is so sharp and the presentation so original that one still feels hugely entertained. It’s as though the cast of Horrible Histories decided to make a spin-off about economics. With more swearing.

The cast themselves (both real and fictional) clearly love the roles they have taken on, and set about presenting their characters with astounding energy and confidence. Whether loudly reciting word-for-word Shakespeare or bickering over the legalisation of prostitution, they seem to have as much fun as the audience do watching it. Particular praise should go to Emma Pallett as Tamara (and, well, herself), who manages to switch from moralising Christian to psychotic killer with terrifying ease; and to Jamie Watt, whose mysterious, Shakespeare-spouting Milosz not only holds the domestic scenes together with his looming evil but also presides over one of the most hilariously absurd stage massacres ever witnessed at the NNT.

The staging and technical side of the performance is worthy of note as well. Standish’s innovative method of having the ‘backstage’ area completely visible helps to keep the audience on their toes, as well as giving the play a far more relaxed atmosphere. Likewise the use of a puppet show to explain the notoriously complex plot of Titus Andronicus is as entertaining as it is educational. Perhaps one of Timon/Titus’s most astounding successes is that it proves, amidst a mess of slaughtered puppets, that it can be accessible to anyone, whether they understand Shakespeare or not.

Timon/Titus is a highly engaging piece of social commentary that is well worth going to see. Whilst some may find it difficult to follow the show’s frenetic absurdity, it nevertheless approaches a vast array of profound philosophical issues with energy and originality. Sharp, grisly and just a little bit unhinged, the study of debt has never been so much fun.

Interview with… The Movielife