Belligerent riffs and an uncompromising sound from the East London trio with a ferocious live reputation. 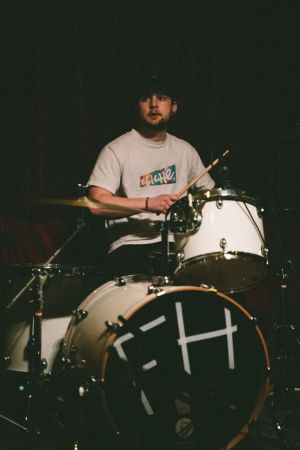 You won’t find many burgeoning new bands who can honestly call Iggy Pop a fan. Despite having only one EP – the snarling Gutter Press – and a handful of recorded material to their name, East London indie lads False Heads have already received the seal of approval from the grizzled punk forefather himself.  “Alternative guitar whacking and bashing music – I like it,” Pop declared one night on the radio in his trademark gravel monotone, “if they come to your town, you might wanna show up.”

Off the back of such high-profile acclaim – and now signed to the record label run by Libertines drummer Gary Powell – False Heads have established a ferocious live reputation. The unruly trio boasts a reported cult following amongst their home crowds, and word of their turbulent performances is rapidly making its way outside of the M25. 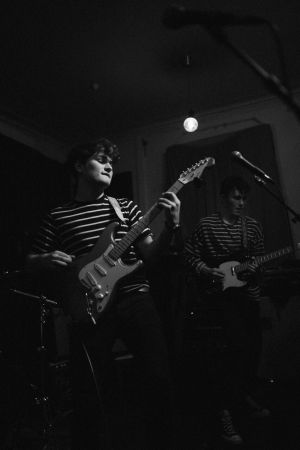 Unlike a number of their more docile peers, they’re also unashamedly political. During interviews, the band has been keen to lambast puerile behaviour from both sides of the Brexit referendum, taking particular aim at skuzz-punks VANT for demanding “if anyone voted leave here, fuck off” during their 2016 Glastonbury set.

Tonight, however, there’s no such blind, narrow-minded prejudice. False Heads’ crowd is an eclectic one – a ragtag melee of arts students, grebos and Valentines dates – all crammed shoulder to shoulder in an attic venue that resembles a converted crack den.

“It belies their raw onstage intensity”

Kicking off the night in excellent fashion, local newcomers Brown Lion Zoo follow in a rich heritage of recent midlands indie darlings. Whilst their debut EP Where’s My Sandwich? is a slick, jaunty affair, it belies their raw onstage intensity. Brimming with potential, the four-piece weave an impressive path between dreamy Peace-like melodies and fierce wig outs. What’s more, their acute knack for songwriting suggests they could be found adorning the NME some time in the foreseeable future. 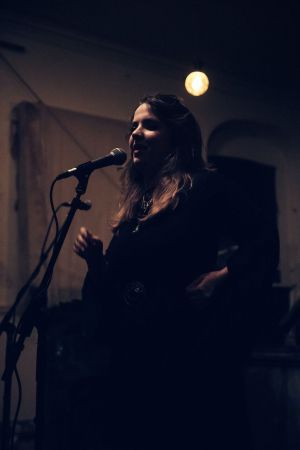 “Haven’t you heard I’m a woman scorned” roars Molly Godber – menacing lead vocalist for the belligerent second support act – and hell hath no fury quite like Babe Punch. Opening up with the monstrous ‘Control’, the Notts-based riot grrrls are a lean, formidable live unit, a potent combination of frenzied, abrasive guitar riffs, Courtney Love-esque vocals and pummelling drum work courtesy of hippie warlock Adam Fletcher. It doesn’t take a genius to understand why they’re so beloved by the city’s underground oddballs.

“The trio barely pause for breath”

Although they aren’t performing to the kind of colossal crowds they might have grown accustomed to on tour with The Libertines, False Heads certainly aren’t allowing the attic venue to impede on their frenetic performance style. The trio barely pause for breath as they lurch from one bombastic QOTSA-style tune to another, jettisoning awkward attempts at stage banter and electing to let their thunderous cacophony speak for them instead.

They might not possess the boundary-obliterating forward momentum of HMLTD or Sleaford Mods, but False Heads make urgent, relentless grunge-punk with definite panache. Moptopped frontman Luke Griffiths isn’t one to shy away from classic rock ‘n’ roll antics either, collapsing to the floor during a volatile rendition of ‘Twentynothing’, and completing the night by kicking his mic stand off stage and clambering tentatively onto a stack of amps, teetering above the onlooking crowd. Iggy Pop isn’t the sort of man to deceive his listeners; if they come to your town, you might wanna show up.