“I am trying to get a lot of student input”: Interview with SU Community Officer Ellie Mitchell 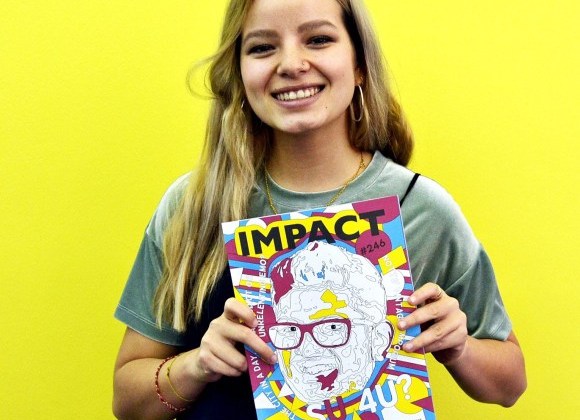 During the interview, Ellie talked about how she has really been enjoying her time in office despite it being “very hard,” the Living Wage campaign, scholarships for refugees and asylum seekers, and more.

What would you say has been your greatest achievement?

Ellie: “Definitely the Living Wage because that was the biggest theme on my manifesto when I was running for Community Officer, and it is pretty much my only manifesto point that I managed to get word to word.

“It was a huge achievement. Obviously, I did not do it on my own, [as] loads of campaigners, lecturers and staff helped.”

“everything you do is on your own, so that is kind of hard”

What would you say has been your biggest challenge since becoming the SU Community Officer?
Ellie: “Probably, time and capacity. You have this massive manifesto and you want to do all of it and then you realise that you just don’t have time to do everything, that you are only one person.

“If you had a big team of people [in the SU] to delegate things then that would be great, but everything you do is on your own, so that is kind of hard.”

One of your roles as the Community Officer involves transport. There have been a few complaints about a lack of frequent buses, such as 34 or the hopper buses. Have there been any improvements on this part?

Ellie: “I would say that the 34 is pretty frequent, it is practically every five minutes in the morning, I think that is pretty good.

“The hopper buses, I cannot remember how frequent they are, but they have not had changes yet because there are [timetables] set at the beginning of the year. But at the end of this year, the company [that has been running] the hopper buses for the last the five years are stopping, and they are trying to look for another company to do the next five years.

“I am sat on the board for that. Basically, I am judging all of the pitches from the people that want to run the hopper buses. I am trying to get a lot of student input, especially around Sutton Bonington.”

Finally, what are you still hoping to accomplish before the end of your time in office?

She ends the interview by wishing all the best to all of the candidates running for both the full-time and part-time Officers.

“The SU is heading in a very good direction”: Interview with SU President Alan Holey