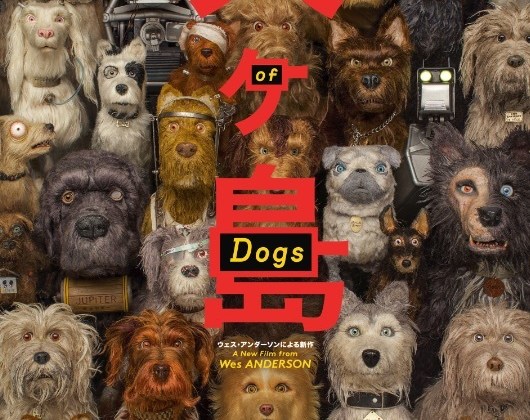 Brimming, as ever, with bagsful of quirkiness and colour, Isle of Dogs has all the trapping of yet another Wes Anderson classic.

Set in a futuristic Japan, the film sees the fictional city of Megasaki, led by its abrasive cat loving mayor Kobayashi (Kunichi Nomura), banish its dog population to “trash island”, a place very much as it sounds, following a bout of dog flu (or snout fever). The once house-trained mutts struggle to survive in their new unfamiliar and thoroughly unpleasant surroundings, forming gangs to protect themselves and scrap over food with rival dogs, scrounging meals from left over trash bags, all the while pinning for a return to their old lives of comfort and luxury.

Their melancholy is interrupted by the sudden arrival of Atari (Koyu Rankin), the mayor’s “distant nephew”, who is searching for his own dog, Spots, amongst the island’s inhabitants. He teams up with a rag tag bunch of once domesticated canines led by the cold, indifferent stray Chief (Bryan Cranston) to travel the length of the island and help find Spots. What follows is a keen introspection of both Japanese culture (who apparently love dogs!) and man’s overall relationship to our four legged, paw-laden friends.

Throughout, Anderson uses his favoured animation format to its fullest capacity. With the sort of meticulous, almost obsessive eye for detail we’ve come to expect from him, the setting of Trash island’s mountains of garbage is made to look just as beautiful as irresistibly symmetrical shimmering seas and vibrant Japanese skylines.

Fans of the director’s particular, acute and inch perfect visual style will not be disappointed. Just as with his live-action outings every frame is meticulously choreographed, with striking visuals extenuated by his usual symmetrical style, complete with just enough trademark pans and tracking shots to bring an ever-present energy to the action without making you dizzy.

The dialogue, which belongs mostly to the film’s canine characters as opposed to its human dialogue which comes overwhelmingly in the form of refreshingly non-subtitled Japanese, is as cool and offbeat as always, with Anderson’s preference for snappy yet irreverent humour translated fantastically into an animated setting.

Perhaps one of the film’s greatest strengths is its ability to support a deliciously simple yet thematically rich rescue narrative with a fully realized world both parts ridiculous whilst at the same time powerfully human.

Anderson’s talent for creating bizarre worlds is nothing new, from the eccentric house of the titular family in The Royal Tenenbaums to the escapist fictional pre-war republic of Zubrowka in The Grand Budapest Hotel, Isle of Dogs serves as yet another example of this; the films twin settings of Megasaki City and Trash Island are detailed with lovely touches of Japanese culture such as taiko drums and haikus as well as many of the film’s frames being stylistically drawing upon the work of the famed 19th century Japanese painter, Hokusai.

This world is also greatly enriched by the strength of the film’s voice cast. As Wes Anderson’s stock as one of Hollywood’s final surviving visual auteurs has risen over the years, the chance to star in one of his movies is increasingly attracting larger and larger hordes of stars.

“There is still however, room for Anderson’s recurring cast of regulars”

Alongside Anderson’s regular acting collaborators, Isle of Dogs for instance, features a host of high profile newcomers such as Bryan Cranston, brilliantly playing the gruff yet cool mutt Chief; Lady Bird director Greta Gerwig as an impudent “pro-dog movement” leading exchange student Tracy, along with 2018’s Best Actress winning Frances McDormand and Scarlett Johannsen in minor roles. There is still however, room for Anderson’s recurring cast of regulars in the ensemble with the likes of Bill Murray, Jeff Goldblum, Edward Norton and Tilda Swinton all turning in typically lively performances, with Goldblum’s efforts as a gossip obsessed member of the film’s central pack of dogs especially chuckle worthy.

At times perhaps, this extensive cast is a little detrimental to the film’s overall effect, with so many quirky and cool personalities in play we are never quite sure just who the central character is, although if anything even this small defect helps to add just another layer of engaging intrigue to the movie’s overall style.

Overall, Isle of Dogs delivers another impressive and exquisitely crafted entry into Wes Anderson’s increasingly imperious filmography. Whether you’re a fan of his, Japanese culture, film or simply art in general, Isle of Dogs is an absolute must see.