Ariana Grande’s Thank U Next: The style lowdown 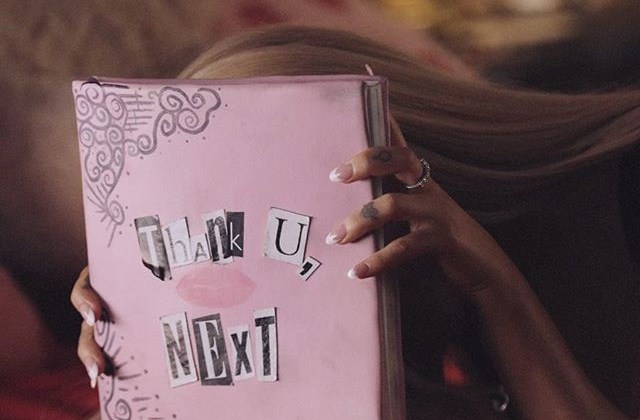 Ariana Grande’s highly anticipated ‘Thank U Next’ music video was released on the 30th of November and broke YouTube’s record for the most views within the first twenty-four hours of release. Many will argue it was the swift and shady references to her ex-boyfriends in her Regina George style ‘Burn Book’, but I would argue it is the video’s reference to four of the best (and most stylish) chick-flicks of all time.

This film took on a very ambitious crossover of four movies, the most popular being Mean Girls and Legally Blonde. I felt after Iggy Azalea’s ‘Fancy’ music video (which recreated the iconic looks of Clueless) could not be topped, but I have been proven wrong. Law Roach (Ariana’s stylist) and Anne Marie (stylist for the rest of the cast) pulled off every look, designing and recreating everything, with nothing being used from the original movies. So, here are the four films and how Grande managed to recreate them, often to make them better than their originals (blasphemy, I know)…

Following a blonde Ariana playing Regina with a small pyjama set and an ‘A’ initial necklace the same as Regina’s ‘R’, we see the ‘plastics’ strutting through the corridor and you can assume it is a Wednesday… the pink outfits are basically spot on, with a hint of Clueless with the cute checked skirts worn by two of them. 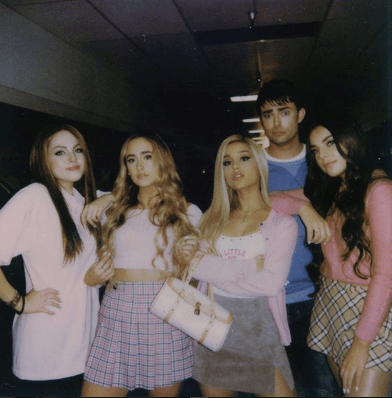 Perhaps the most iconic scene of them all (except Kris Jenner at the very end – a must see) is a recreation of the plastics ‘Jingle Bell Rock’ performance. Swapping the shiny vinyl material used in the original movie, Grande opts for velvet fur-trimmed crop tops and skirts. This topped with black knee high boots (a statement Grande piece) makes this look my all-time fave. Oh, and Kris Jenner in the pink tracksuit, acting as Regina’s ‘cool mom’, tops it off.

The famous ‘cheer of’ scene in Bring It On is recreated, with the cheerleaders’ outfits ‘RCH’ initials (for Rancho Carne High School) being swapped for ‘TUN’ for… Thank U, Next (duh). The shiny red bows are larger and the hair is higher; Grande paying a great tribute to a really underrated film. 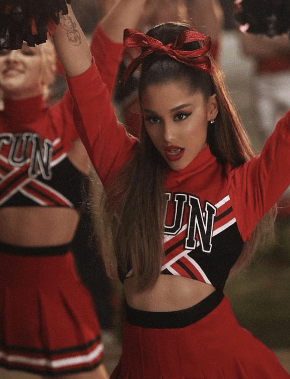 Ariana plays a distraught Jenna who is at Matt’s wedding (her best friend and the man she loves). She perfects the classic Jenna hair and the red floral wrap around top. But perhaps more importantly than her outfit is the dream house, which is recreated in ‘Thank U, Next’ style. There is one room dedicated to each of her characters; a Bring It On poster-filled decorated room, a princess pink Regina George room, workaholic Elle Woods’ dorm room. Last but not least is a paper cut-out Ariana in a bubble bath as there was a mini Jenna in 13 Going on 30. These mini-tributes pass by in less than a second, so keep your eyes peeled for this.

Ariana makes a beautiful and extra sassy Elle Woods, standing out from the crowd in a vinyl pink fluffy co-ord. Perhaps the best Elle Woods look she recreates is her outfit for the famous ‘Bend and Snap’ scene at the hairdressers. She wears her fringe down, adorned with a few bright oversized flower clips. She wears a sheer pink drape over cardigan over a fluffy pink bralet with blue mom jeans and chunky heels; the epitome of a 90s girly girl. This ‘Bend and Snap’ scene has too many amazing 90s looks, including Jennifer Coolidge in a denim co-ord eerily similar to the one she wore in the original Legally Blonde.

So, if this, coupled with the explicit references to her ex’s in a Burn Book is not enough to watch her video, oh, and the original Aaron Samuels making a return, I do not know what is…

Meet the Team and Their Festive Favourites – Reviews