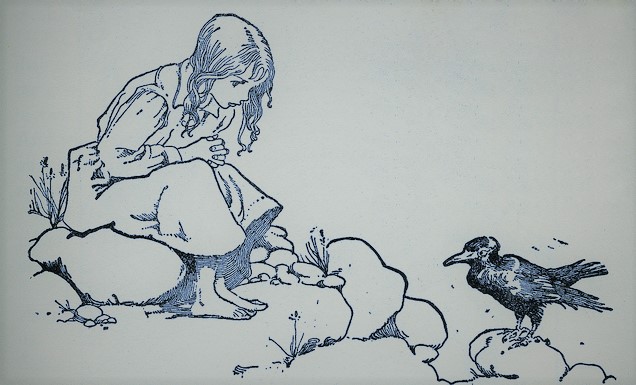 In Winter, the call of the bells hound the Orphan Girl as she passes through the flurrying snow. In her rags she is a mere part of the landscape, a muddy blot gone unnoticed amidst the shifting frost. She is the ghost that haunts the alleyways where other children fear to walk.

She is sweet-hearted. It is Christmas Eve and she leaves miniscule foot-prints on the white paths as she walks through the town, where carols can be heard from the old church. There are only brief intermissions of light amongst the darkness, cast by merry windows and lamps arching over the roads, and she moves from spot to spot becoming shadow then corporeal again.

She peers into one window, low down on the ground, but still, she must stand on her tip-toes and reach frozen fingers to the ledge to be able to see the festivity inside. There is a beautiful tree in the corner, the smell of crisp pine in the air, warmed by the crackling fire that is lit in the hearth. A mother and father each wrap a warm hand about a child, younger than her, and she feels for a moment their protection before sighing a tired sigh, placing her hands in the nooks of her arms again and walking on.

She comes to the church now, where the door to the entry-way stands open, and steps over the threshold. There is another set of open doors leading into the ancient church hall, and a golden light accompanies lilting voices which fight off the shadows outside. A pan is passed around the sitting congregation and boxes wrapped in marvellous colours sit in the corner, yet, she doesn’t feel the warmth. It is as if an impenetrable boundary of fire bars her entrance, and if she were to reach out and touch it her fingertips would turn to ash. And so, she leaves, dejected, once more.

She sits now in the graveyard by old man Oak, whose leaves he has shed, and who shivers his bare arms in the wind yet offers them to her in a protective gesture. Crawling up into a nook in the trunk, a family of bluebirds call against the frost-lit night. A red-breasted robin perches on the tree and tweets a small jig, which causes her red cheeks to rise in a smile. It is very cold now, but when the robin flies away, she feels warmer as snow-flecked, feathered wings sprout from her gentle shoulders and she follows him, sweeping into the starry sky.

Image cropped and edited for size and fit by Esther Kearney.

How to decorate your student accommodation for Christmas