Once again we are immersed in Frankie Denton's mysterious world with his latest re-telling of Little Red Riding Hood... 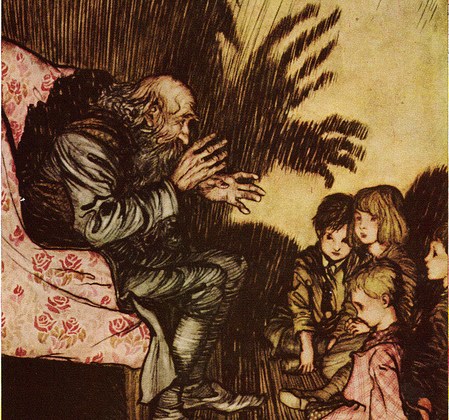 If you go down to the woods today, you may find a stranger on a dark and winding path. I did once, when I ventured into the black pines. He stood like a shadow and when he moved, he was the shifting ebony of a dilated pupil. He was not a thin man, but he towered over all, and possessed the tremendous, beastly voice of the town-crier, for that is what he had been before they cast him out of the village, through the snow and into the Unknown.

I found him, one afternoon when the wind and my father and mother were howling and the village-folk were calling for blood. I brought my pistol and followed his deep, frozen footprints into the woods where the branches are close and welcoming, where they embrace you and kiss your cheeks with their sharp tongues and whisper their songs in your ears.

He took me in and I discovered that my fears had been for nought when this beastly man was revealed to be kind. We lived for a time in that sweet cottage, with the calls of the wolves outside and the thunder at our windows.

In the day, we would often journey in the woods, off the beaten path with the bluebirds and ravens at our heels. He would sing to them in that monstrous voice which used to be our rooster’s call, the source of all our tidings. We collected wild berries and mushrooms and with his enormous grasping hands he would sweep a fish from out the slithy river and place it in my basket.

But one evening, with the fireflies illuminating the forest for the trees, we heard an unnatural noise – a careless step, unwelcome, unheard, misplaced and snapping the undergrowth which we were so cautious to preserve. It was the Huntsman from yonder village.

With a knife at his waist, and a rifle on arm, the poor soul before me, he dealt the beast harm.

‘No!’ I cried. ‘You barbarous. Brutal. Beast. You silly. Savage. Clown. How could you kill this good man, who once had left your town?’

But the Huntsman was not one for words, was not as skilled as I, and reaching for my pistol, I shot him through the eye.

I did not know what to do then. The Huntsman lay fallen amidst the undergrowth and the fireflies pooled to his red eye. Without my poor companion I was lost, alone in all the world. He had fallen into the river, and his chest bloomed crimson like a rose as he drifted peacefully along.

I stood there for a time, simply watching the water flow by, until it all dried up and only the red of his blood remained. I pinched it in my fingers and wove it first into a ribbon and then a cloak with a hood so deep I could sleep, dream and watch from within its presence – the guardian of the wood with a flock of ravens upon my shoulders. No more do huntsmen come to this wood, no fortune-seekers or fools with greed in their hearts. I have not seen them all in my long life, as I stand, wistful, by this river-side.

Featured image courtesy of Thoth God of Knowledge via Flickr.