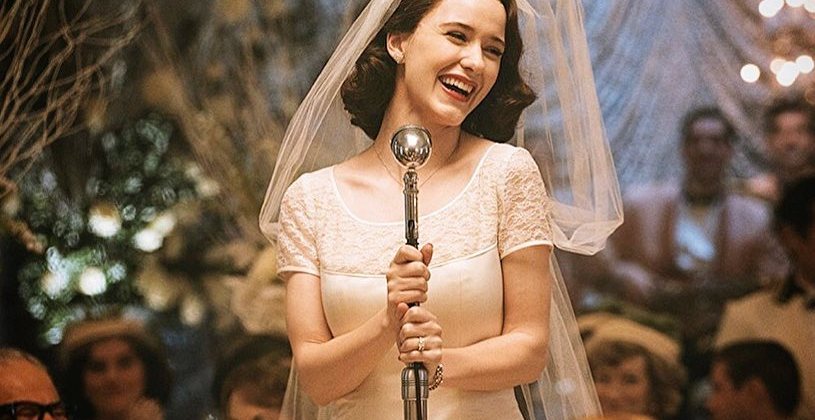 Amazon’s The Marvellous Mrs Maisel is a show that people are seriously sleeping on! It has comedy, it has drama, and most of all it has the one of the best wardrobes on TV.

The Marvellous Mrs Maisel is a comedy-drama about Midge Maisel, a housewife in 1950s Manhattan who decides to become a stand-up comedienne. Beyond the award-winning acting, nostalgic music, and beautiful shots of the big apple itself, the show’s costuming is something that continually takes my breath away. Even the more mundane outfits are perfectly fitted (excuse the pun) for the era and work so well at encapsulating each character’s personality. Costuming is often a part of film and television which is under-appreciated, but it is a vital component for creating not only a believable setting, but realistic characters.

When your cheating husband turns up this is how you want to look. Red dress with matching lips and nails. Killer. #mrsmaisel #seasononeepisodetwo 💄🔥

Midge, played by the brilliant Rachel Brosnahan, is a true style icon all by herself, and half of her outfits are inspired by the style icons of the time. Think Audrey Hepburn, Brigitte Bardot, and Fiona Campbell-Walter, and you will know exactly the style I have in mind. Imagine cinched waists, boat necklines, and silk scarves tied in a bow. Picture tailored Capri pants, pearls, and fuzzy pink coats. Each and every character has been sculpted to achieve an enviable 50s aesthetic. From Joe Maisel’s suit jackets and moth-eaten turtlenecks to Susie’s newsboy caps and suspenders, every detail is intentional. Costume designer Donna Zakowska’s research seriously pays off.

In season one alone we were treated to the stunning array of items in Midge’s wardrobe. Whether it is a pair of shorts and a matching shirt for an athletic, preppy look, or a voluminous maroon gown with matching heels, it makes you want to reach out a touch the silk and satin.

Zakowska, speaking to Entertainment Weekly, explained that women in the 50s were ‘very, very conscious of matching’, and said that she was eager to explore colour and to work with ‘combining [it] in a way that we don’t really see in contemporary fashion’.

The result is a visual marvel. Every costume fits each character, and while the Parisian influences are clear, they do not look out of place in Midge’s huge apartment or in the streets of New York. The clothing is magical and surreal in some ways, reminiscent of a fairy tale with feminine, gauzy skirts and crisp, perfectly-fitting jackets. That the majority of the costumes are handmade is testament to the costume department on the show and their own take on the period. Zakowska wanted to show off the ‘incredible optimism and identity’ of Midge, and for that, creating the outfits by hand was the only way to go.

It is no surprise, then, that there are multiple Instagram accounts dedicated to the looks on the show, as well as endless articles gushing over the costumes. With every episode, I feel I am receiving an education in 1950s women’s fashion, as well as a telling off for allowing myself to schlep around in a generic t-shirt and jeans combo.

But the show is more than a pretty thing to look at it. It also says a lot about the social norms of the time, the pressures placed upon women especially to conform to the fashion of the era and to stay beautiful 24/7.

The infamous ‘cold cream’ scene comes to mind, in which Midge waits until her husband is asleep before running to the bathroom to remove her full face of makeup, apply cold cream, set her hair in meticulous curlers, and then return to bed. She then wakes before her husband does, runs back to the bathroom, and applies a fresh face, sculpts her hair into flawless curls, and adds a spritz of perfume. When her husband does awaken, she looks picture perfect. It is a funny scene, especially when she asks, eyelashes fluttering, if it’s already morning.

“[The costuming] says a lot about the social norms of the time.”

Costumes are definitely not the only channel for social commentary, but they are a big part of it. While that pressure to dress better than the next person still lurks on in the present day, it is certain that fashion has not only changed dramatically, but has become a lot more diverse, too. Now experimenting with your own individual look is encouraged, and new trends pop up every day.

Midge Maisel is a style icon. If you want to recreate the look yourself, or even incorporate a little of her flair into your day-to-day wardrobe, grab an oversized coat, fling some pearls around your neck, and be sure to match your bag to your shoes.