During our Students’ Union Elections Media Day on Thursday 28th February, we chatted to the candidates who are running to be elected as your Community Officer for the 2019-20 academic year. Take a look at what they had to say. 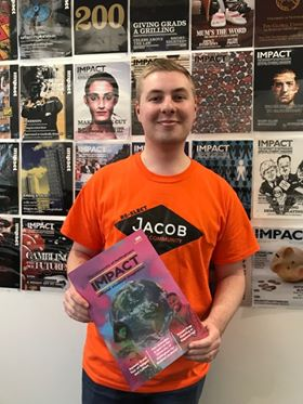 Jacob Collier, current Community Officer, is running for re-election and hopes others agree with his “cracking plan”.

Jacob’s “first big policy is a student union letting agency based on campus.” He notes, the “need to improve housing standards in the city for students because a lot of students have issues with the landlords, they get ripped off, or they live in housing that is not fit for them. Having a letting agency that students can trust and they know that we’ve approved the properties for will improve the experience of students when they rent.”

Jacob admits, “it’s something that my predecessors have talked about, but no one has managed to deliver it, but this year I’ve had some conversations with people and there does seem to be movement within the university.”

He also emphasises “I’ve managed to have a lot of relationships with councillors and external partners in the police. Having someone in that two year role gives extra stability, and I can build on the partnerships I’ve already made, deliver, and work for the students.”

Jacob “would like to improve on halls experience and increase the committee budget because the university is looking to take away this budget or divert it to other projects.” He continues, “we should empower our committees who are elected to represent their students. They are the best people to know what the students in that hall want.”

When asked about safety in Lenton and other student areas, Jacob “opposes the cuts to police, which has had a detrimental effect on people’s safety… I’ve spoken with the local MP, Lillian Greenwood, and she opposes the police cuts. I want to work with the council to reprioritise the police that are in the city centre.”

On anti-Semitism, Jacob has been “proud to work with the J-Soc and the Union of Jewish Students. I’ve got a really good relationship with them, and making sure their members know that we have a facility to report hate crime is important. I will work to promote the hate crime reporting centre.”

Edward was unable to attend Media Day. His manifesto can be found here.