During our Students’ Union Elections Media Day on Thursday 28th February, we chatted to the candidates who are running to be elected as your Equal Opportunities and Welfare Officers for the 2019-20 academic year. Take a look at what they had to say. 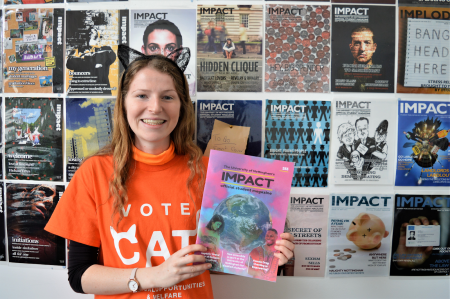 Catrina Coakley-Burns (Cat) is a third year English student who is running for Equal Opportunities and Welfare.

She wants to give back to volunteers, focusing on individual volunteers as well as the committee as a whole, ensuring annual awards celebrate everyone who takes part.

Another objective she has is to make a ‘Home From Home’ event, encouraging first year and year abroad students to come and socialise during the early weeks of term, supplying them with information about leisure activities, transport and accommodation.

If she could only complete one of her manifesto points it would be to achieve better communication between the different welfare groups. She will create a Facebook group that has all the welfare groups in it, ensuring that the separate committees become more connected and work on projects together.

She goes on to discuss the problems around sexual health screenings, with Cripps Health Centre’s cuts last year meaning many students have to go into town to have a screening. She thinks this makes it more daunting for students, particularly for those in first year who may not know how to get into town or where to go.

Cat believes she has had extensive experience in terms of welfare, being the Welfare Rep in Rutland Hall when she was in first year and being a part of the Welfare Network this year. She now wants to bring these ideas to a higher level.

Cat’s slogan, after our favourite Hallward cat, Bertie, left us, is “there’s a new cat on campus”. 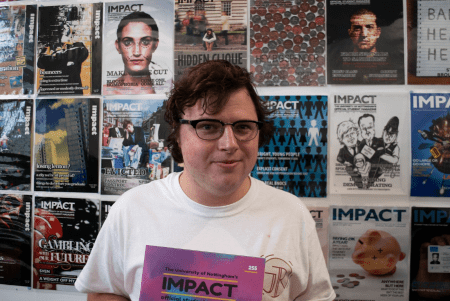 JR is a third year Psychology student, running to be your next Equal Opportunities and Welfare officer.

His first manifesto point is “Welfare for all”, which he explains aims to make welfare more inclusive and comprehensive. JR says that the experiences of  “mature students, disabled students, LGBT students, BME students don’t fit into the stereotypical student experience” and aims to reflect all these different experiences within welfare support.

JR continues, “although it is 2019, equality hasn’t been fully achieved.” One way in which he intends to address this within the university is through his second manifesto point, which he calls “not on university park”.

This aims to address a lack of welfare services in off campus accommodation by providing  “welfare that’s comprehensive and effective” across all university accommodation. JR states “there is a difference in experiences” for off-campus students and says he wants to increase welfare support, as he feels that having one warden for every three accommodation residences is not enough.

Another manifesto point is to improve how the university reports on student suicides. JR explains that he wants to ensure these are recognised by the university, and addressed in a “sensitive but not dismissive” manner.

His final key manifesto point focuses on “furthering welfare and equality training for all student-facing employees at the university and Student’s Union.”

If elected as Equal Opportunities and Welfare officer, JR would like to achieve a comprehensive welfare system for students who do not live on University Park.

When asked about the campaign process, JR is looking forward to chatting to different people about their welfare experiences, saying “campaigning is a fun chance to meet people you wouldn’t normally.”

JR’s slogan is “Near, Far, Wherever You Are, JR”, which he feels summarises his approach to welfare of all students across university sites. 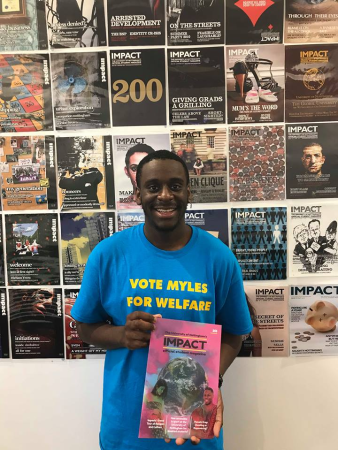 Myles Smith is a third year Sociology student who is running for Equal Opportunities & Welfare Officer. Myles is the Vice President of the Soc Soc Committee which is the Sociology, Criminology and Social Policy student network. Being involved in the SU in this role, it felt like a natural progression to run for Equal Opps and Welfare.

A lot of Myles’ motivation and reasons for applying to the role is because welfare, student mental health and suicide prevention, is something that he is passionate about. Every point on his manifesto reflects the grievances that students has shared with him, his hope is for his work to represent the student body.

For Myles being Welfare Officer “is not only about what it means to me, but what it means to everyone. Being a student, I’ve seen how it affects other people and I think every student here has either first or second handed experienced the negative impact of a lack of welfare.”

Myles expresses the unanticipated mental effects that coming to university has on students “we come to Nottingham for three years (or more) and no one expects, coming here, that they will end up in low places in which they do.  At the end of the day it’s important to note that whether you’re black, white, girl, boy, non-binary, we all go through the same issues especially regarding mental health and welfare.”

Myles’ slogan, which was thought of by his friend, is “always going the extra Myle” which is a testament to his kind and caring nature going above and beyond for the people around him.

Myles states that many students rely on peer to peer support but believes that support can be enhanced with the right framework everyone would be able to reach their full potential.

His main goal is to put in place a long-term strategy for suicide intervention and mental health early prevention because the current issue is that the relevant support isn’t there until it’s too late and when it is there it’s not to the needs of the individual.

To read the manifestos for your Equal Opps and Welfare officers head to the Student Leader Elections website.