0 February 28, 2019 19:54 by Nicolas Caballero
During our Students’ Union Elections Media Day on Thursday 28th February, we chatted to the candidates who are running to be elected as your Postgraduate Officer for the 2019-20 academic year. Take a look at what they had to say. 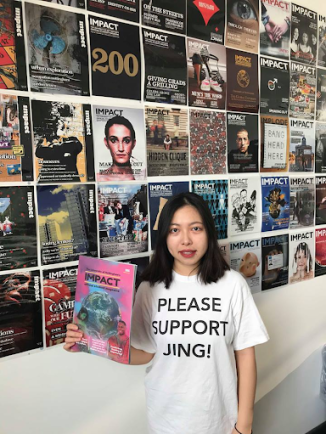 Jin Jing is an international Masters student of MSc Business and Management who is running to be the next SU Postgraduate Officer. Here is what she had to say about her manifesto and ideas for the role.

She wants to “provide a better study environment for postgraduates” to allow them to get to know each other. She’s realised that it is mainly Chinese students who are studying at postgrad and wants to make sure that Chinese postgraduate students receive support.

As well as this, she wants to organise more socials and events for postgraduates because most postgraduates are studying a year long degree and she believes it’s important to make that year memorable. Even though the year is so short, she believes it can be difficult to get to know all the postgraduates around you because they are all coming from different walks of life.

Jin explained that postgraduates are normally spread across different accommodations, unlike undergraduates who often share halls, so there is less time and no fixed place for postgraduates to really get to know each other. Some incentives that she looks forward to putting into action are games nights on campus and network picnics. 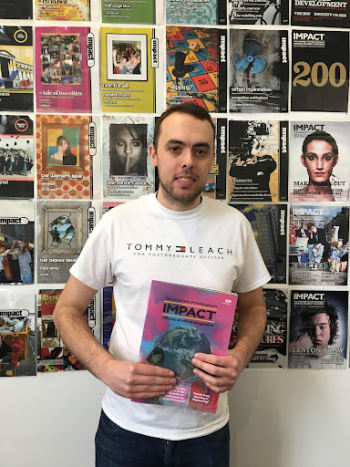 Tom is a final year undergraduate studying Sociology and Social Policy running to be Postgraduate Officer. Here’s what he had to say about his policies and aims for the role.

He also expressed his aim of “widening participation for people going on to postgraduate study.” Tom explained that he personally has struggled when looking into completing masters courses due to the high costs involved. So, rather than academic ability holding students back, it is the financial difficulties.

“At undergraduate you get funding; you get a core bursary if you’re from a low-income background. There’s nothing like that for masters students.” Tom stated that since the government introduced a loan for masters students a few years ago, this has led universities to increase course costs for postgraduates. Therefore, even despite the loan, this leaves students “without enough money to live.”

“Other universities like Bristol do a 10% discount for current undergraduate students, so something like that would be good.”

As well as this, Tom stated his excitement for the week ahead. He is looking forward to “meeting different people and having a laugh” during the campaigning process. “I’ve already met some good people today getting the banners up.” 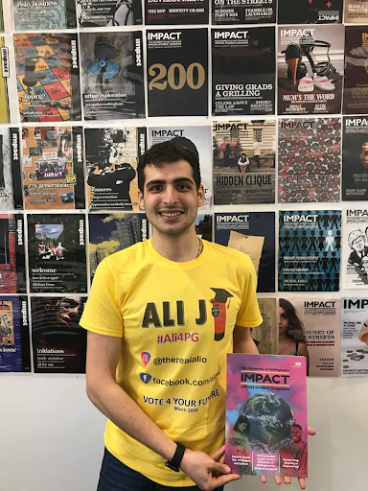 Ali Jourabchi is a postgraduate studying MSc in Mechanical Engineering and studied his undergraduate on the Malaysian campus. During his undergraduate, he was aware of Faculty and Course Reps and nominated himself as the faculty rep for engineering once he came to UoN. It was his time as faculty rep along with his engineering knowledge would make him a good candidate for Post Graduate Officer.

One of Ali’s main objective is the addition of technological advancement in the SU, modernising the way in which information is communicated between students and the academic staff. Ali expresses his concern regards to this disconnect and believes that adopting something like a ticket system would allow us to do a lot of things in one year.

We’re heading into 2020 and everything is advancing so why not simultaneously advance the SU and the Postgrad Network. As faculty rep, Ali has been able to gather the grievances of students and has realised that there are certain issues that have not been relayed. It is this gap in the system that he hopes to combat.

Ali is excited to meet new people, talk to them and get them involved in understanding what the postgrad network does. At UoN there seems to be a division between postgrads and undergrads, even though they share a campus they live completely different lives.

Ali stated that “It’s important to target undergrads because they have a 50% chance of doing a postgrad at UoN and that’s why my slogan is ‘Vote for your future”. 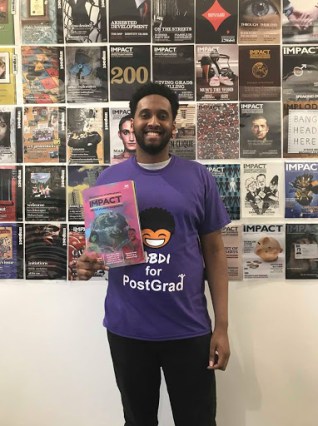 Abdi is a postgraduate studying Computer Interaction, having previously completed his undergraduate at the university. He is running for Postgraduate Officer.

He explained that the first three policies are linked: “These are about engaging with not just the postgrad-taught or the postgrad research but also the PhD.”

Focusing on the officer role itself, he explained that “everybody has some sort of misconceptions or stereotypes about what the roles are and what they are actually like in reality. I want to change that.”

He continued: “There seems to be a misconception that it’s only really relevant to postgrads […] it’s also working with the education network to make changes for undergraduates as well.”

In terms of inclusivity, he wants to have a vlogging session every two weeks and a live Q&A session: “Postgraduates are made up of students who are part-time and distant learners as well […] some of them don’t even live in the city and so you’ve got to find a way that everyone can feel involved.”

Another of his policies is based on increasing supervisor support for postgraduates: “I aim to implement a system where they have to respond within a certain amount of time as the system will prompt them to.”

When asked what makes him a unique candidate, he said: “I was fortunate enough to be the JCR President as well as being involved in quite a lot of student-run activities […] I am familiar with the Student’s Union, I’ve worked with them previously to provide events for the largest campus in the University of Nottingham – Newark Hall.”

He continued: “I am very approachable and very eager to make a change and I genuinely want to help people […] and be their anchor for the SU, as I’ve done previously.”

The slogan that Abdi has stuck with is “Inspiring Changes” as he believes that it is the most suited to him: “I do genuinely want to make change, but I want change that inspires people.”