As a student it can be tough to cook nice, appetising meals, whilst also sticking within your budget. Miguel Barclay’s books can therefore be seen to adhering to everything a student could look for in a recipe book, cheap tasty recipes! Inga investigates…

I decided to go for a recipe which I normally would not normally cook, and cooked a fish dish. I have always been sceptical of using frozen fish in recipes due to their general lack of flavour and general inability to absorb any kind of sauce, richness, flavour you attempt to infuse into it.

All ingredients used were bought in Lidl. The one issue I found in accordance with the £1 rule of the book is that, yes it does come to £1 per meal, however the entire item must be bought in order for you to use a smaller portion of it. The calculation of the use of the smaller portion is what constitutes to the meal costing £1. For example, this recipe uses 200 g of chopped tomatoes, whilst in the shops you can only get 400 g cans of chopped tomatoes, hence excess is left over, although the portion of tomatoes used when added to the portions of the other items does equivalate to £1.  Perhaps the £1 meal idea works better for two people rather than one.

In general, the recipes within the book itself are fairly easy to follow, and very clear. Further to this they are relatively quick, something, again, advantageous to the busy life of students!

On with the Recipe …

One fillet of frozen fish 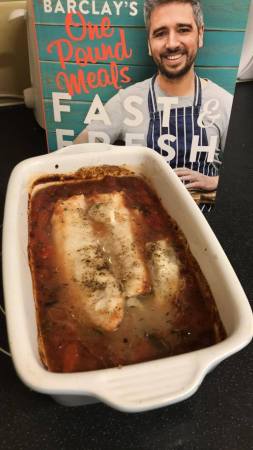 Overall, I do see the book as useful as a student , and it provides many substitutions for some more expensive food items which I certainly find useful. He also uses frozen food a fair amount, and it acts as a nice introduction to using frozen food to its advantages, saving time and decreasing the price of meals you make!

If you like the idea of the book, have a look online for some of his free recipes. I tried these prior to buying the book and that’s what encouraged me to buy it.

Featured image courtesy of Sustainable Economies Law Center via Flickr. No changes were made to this image. Image license found here.

Image within article sourced from author.

Want to write your own food reviews ? Email us at lifestyle@impactnottingham.comto get involved !