Given the increasing prevalence of mental health issues around the UK, especially within young adults, the times has come for action to be taken. This week (18th-22nd March) has seen the University of Nottingham’s Suicide Awareness Week reaching national attention. As the week concludes, it’s vital that the momentum and awareness gained doesn’t grind to a halt. There are people struggling throughout university and day-to-day life and as a university we need to try and create an optimum environment for students to enjoy themselves.

One of the TV programmes that I believe best presents mental health is My Mad Fat Diary, which aired on E4 in 2013. In many ways the topics and themes of the show still ring true, including the prevalence of mental health issues and eating disorders amongst young people. Based on the novel My Fat, Mad Teenage Diary by Rae Earl, the story follows Rae, a deeply insecure, anxious teenager who has just been released from a psychiatric hospital. Sharon Rooney is truly transfixing in the lead role, portraying Rae as a witty, intelligent and ambitious young woman in spite of her struggles.

Rae’s relationship with her therapist, Dr Kester (Ian Hart), is amongst the show’s many strengths, with an authentic, endearing and unlikely friendship emerging. Dr Kester is Rae’s first port of call as we watch her tiptoe through the minefield of secondary school, friendships, romantic relationships and family problems. The characters are lovable but flawed, hilarious but sincere. Featuring the likes of Jodie Comer (Killing Eve, Thirteen, Doctor Foster) and Faye Marsay (Fresh Meat, Glue, Game of Thrones), the cast fit the bill perfectly.

As well as dealing with the recovery and everyday implications of living with a mental health problem, My Mad Fat Diary also tackles the stigma attached to mental health. Rae initially lies to her best friend Chloe about her admittance to hospital, desperately trying to fit in with Chloe’s friends and hiding her struggles for embarrassment and fear. Experiencing shame about mental health issues is common, and it is only when Rae addresses and accepts her struggles that she is able to progress in her recovery.

A rewarding, touching and enjoyable watch, My Mad Fat Diary achieves a non-cliched, non-judgemental depiction of mental health. Rae is not defined by the challenges she faces, instead she continuously breaks down the barriers of her mental health.

‘Breathe Me‘ by Sia

Music is perhaps the best art form at creating realistic portrayals of mental health issues as most songs are informed by personal experience. Songwriting is used often as a method of discharging emotions, particularly those that are unwanted, and may clarify these moods for those who are confused or negatively affected from what they are feeling.

Breathe Me is a beautiful and sorrowful song about depression and self-harm, depicting the soul-sucking encounter that Sia, the song’s creator, has had with suicidal thoughts. Sia, the voice behind hit singles Titanium and Elastic Heart, has previously opened up about her depression, noting how “…at least one year out of every three” she feels suicidal. This vulnerability is unmistakably apparent in Breathe Me, as she notes that the worst part of self-harm is that there is “no one else to blame”. Indeed, depression is a syndrome that can affect any individual at any moment in time; the external world has little impact.

The loneliness that is depicted in the song is heart-breaking. “Be my friend, hold me, wrap me up, unfold me;” Sia is literally demanding attention, using commands that portray how she needs interaction. But her mental state keeps drawing her back within herself, making her “nowhere to be found”.

It takes courage to release music that is so honest and emotional, particularly if the song centres round a musician’s negative mental health state. Breathe Me, then, is a deeply important song, as the lyrics make the listener empathise with Sia and her mental state, and, perhaps, those who suffer from depression in general.

Despite the prevalence of mental health issues in today’s society, such issues are rarely well reflected in today’s modern media. Even I, an avid entertainment consumer, had to rack my brains for a while to remember a text which positively addressed the problems of mental health in today’s media. The one I finally remembered? Nimona. (Warning: incoming spoilers, read at your own risk; or just go read Nimona yourself now, it’s awesome. Do it.)

A relatively short graphic novel about a super villain’s shapeshifting side-kick, this beautiful text starts hilariously. Full of fantastic one liners and broken sarcastic comments, you wouldn’t expect the darker tone which occurs halfway through. But sure enough, this light-hearted comic quickly becomes far more serious as we learn of Nimona‘s traumatic past, and witness her difficulty processing such trauma, instead using humour as a shield, and when it all becomes too much, bursting into angry outbursts rather than processing her feelings more healthily. But though she struggles, our favourite super villain helps to calm her down and provides her with the friendship she needs. Yet rather than just end on this cliché, Nimona handles things more realistically – yes, she has friends now to support her, but that doesn’t fix everything overnight, and at the novel’s end she leaves, to process things herself.

Why I love this is because it’s so more realistic than the cliché ‘everything is fine if your friends support you’. I’m not saying friends aren’t a massive part of aiding with mental health, but they aren’t a quick fix. You, yourself, ultimately need to learn to process your emotions, and Nimona aptly reflects that, demonstrating the importance of friends, but also the importance of self-growth. Though perhaps this mental health topic isn’t the focus of the novel, it’s one of the better representations I’ve seen in today’s modern media, and it’ll forever remain my favourite graphic novel. 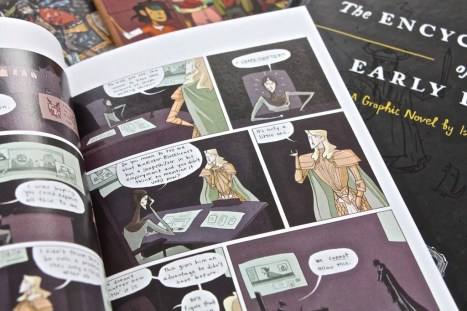 Netflix’s recent dark comedy-drama Russian Doll has been met with widespread acclaim and rightly so. Natasha Lyonne is beyond sublime as the shows leading role, portraying a wise-cracking, confrontational yet clearly vulnerable 36-year old woman named Nadia, whilst her partner in crime Alan, played by Charlie Barnett, is an obsessive neat-freak, unable to let himself slip into the carefree flow of modern life. As a TV series, Russian Doll is like Groundhog Day on ecstasy, given the snappy rollercoaster of the programme’s eight twenty-minute episodes

Without spoiling the entirety of the show, because you really ought to see it, Russian Doll sees a woman on her 36th birthday party repeatedly dying and waking up again at her party. No matter where or how far further into the future she dies, she always wakes up in the grandiose bathroom of her chic New York best friends. However, once she finds out that she’s not the only one stuck in the infinite loop, things get interesting and the deep, twisting layers of the show’s fabric begin to unwrap, revealing a hidden motive behind the shows creation. Written by the incredibly minds of Amy Poehler (Parks & Recreation, Saturday Night Live) and Natasha Lyonne, the show offers a telescopic insight into the trials and tribulations behind therapy.

When dealing with stress and mental health issues, therapy becomes a vital means of trying to reintegrate you back into society. Upon each death Nadia wakes up knowing more and more information, which she had only learnt between the two most recent deaths. The emotional and intellectual development of both Nadia and Alan throughout Russian Doll signify the mental development that comes through each session of therapy. The setbacks that each character faces mirror those that people might encounter when trying to overcome deep mental health issues

The most impressive part to the show, aside from the twisting storyline and dark-natured comedy, has to be the way in which the show’s creators manage to show that therapy is a process which works slowly and carefully over time. Obstacles will occur but step-by-step guidance can help both you and others around you to make yourselves better. The show itself highlights how clear-cut issues such as suicide can be tackled through the seeking of help and through the medium of therapy. Given the inherent darkness riddled throughout the show, Russian Doll breathes an air of optimism on the future of mental health management.

Article Image Courtesy of Lucy Powrie via Queen of Contemporary.