Entering ‘The Glee Club’ for the first time, I immediately knew that I was in for an enjoyable evening: the softly glowing pink lights creating a warm and inviting atmosphere, making me ready to see the great Hal Cruttendon perform live only 10 feet away from my table. 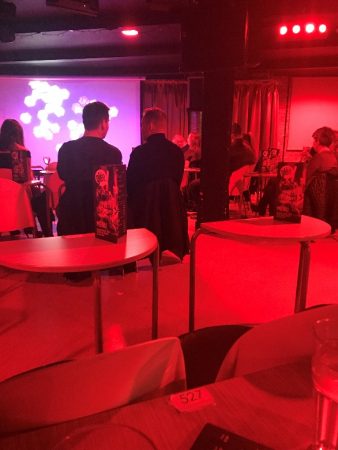 With an enthusiastic cheer from the crowd, Hal took to stage. The atmosphere changed almost instantly when Frozen’s ‘Let it Go’ came on the sound system- Hal doing a slow mime like dance to it with funny facial expressions getting the audience laughing straight away. It cleverly made us feel relaxed and engaged as we watched him not taking himself seriously at all- classic comedy.

“Sarcastic, charismatic humour would be the style throughout the evening”

His first half 45 minute monologue consisted of introductory comments about the small size of the venue, jokingly (I think!) complaining about where his career had gone wrong. It was this sort of line that me know that sarcastic, charismatic humour would be the style throughout the evening. The first topic revolved around the theme of self- obsession, told with high energy and enthusiasm. He talked about the way that he is inspired by a ‘self- help’ book to live life: recommending it to the audience, in a way that was almost promoting it for the author. Whether he was being serious about this mentioning or not I don’t know- (I guess you never do with stand-up comedy talk).

Hal then brought his personal life into the picture, as he started to use his wife and daughters as subject material. With only a few sarcastic comments here and there about them, what stood out to me was the fact that he said he had danced to the frozen song because his daughters had asked him to, his family man character coming through. He then moved on to take a more interactive approach with the audience, choosing to talk to one couple on the front row for most of the evening. Asking the question “what’s it like being fat, because I am too” to another person would be entirely insulting, however, for a stand-up comic like Hal, it’s all for fun and can easily be excused. It was done light heartedly, causing the couple in questioning to laugh at themselves too.

“Hal seamlessly moved from one random topic to another”

Like all great comedians, Hal seamlessly moved from one random topic to another. One of my favourite moments was when he talked about the concept of dying and how he’d prefer to die. He said he wanted to die in a plane crash because everyone would be smiling in terror as they would plummet down to the ground- quick and painless but, in some way “dying on the edge”. Making fun of popular culture was another brilliant topic to include, like Love Island; my favourite line of the whole show must have been: “if we have screwed up the next generation’s future they’ll be too thick to realise”!

His comic style was centred on making jokes out of serious issues, but also raising such issues to the surface, like gender equality, causing the audience to think a little more about his intentions. Topics were current and entertaining: American culture, Michael Jackson and even Brexit being included in the discussion.

Overall, the evening was one I’m glad I didn’t miss- the timed 90 minutes going by way faster than I had anticipated. I will definitely be seeing Hal perform again whenever the next opportunity arises.