Having died aged forty-nine, the vivacious Prodigy frontman will forever be remembered as a pioneer in British music.

In recent years, ‘icon’ has been a term zealously overused to describe artists sadly no longer with us. Whilst many of these figures have undoubtedly helped their genre thrive, few could claim to really be a pioneer within the field of music in general. Yet after police were called to an address in Brook Hill, Essex, on March 4 2019, it was announced that Keith Flint, a true British musical icon, had taken his own life.

As the frontman of The Prodigy, Flint will go down in legend as one of the most important figures to have ever graced the genre of dance music. In 1997 The Prodigy not only made sure that dance music was embedded within British culture, they projected it on a platform so large that nobody could ever forget them when the ragtag band of misfits headlined the globally-renowned Glastonbury Festival, perhaps the defining moment in electronic music.

You don’t make them like Keith anymore. The concoction of giddy Rottweiler and human jack-in-the-box will be sorely missed within an industry craving originality. Every record by The Prodigy that Flint featured on hit No. 1 in the UK, a sensational feat for a band pushed into the shadows by music’s sneering pureblood followers, whilst their live show has proven impossible to replicate.

Despite having an unhappy childhood and being expelled from school at the age of fifteen, Keith channeled his thoughts and emotions into his love of dance music. A keen fan of the 1980s acid house scene, Flint formed The Prodigy with Liam Howlett, Leeroy Thornhill and Maxim Reality in 1990.

“Flint’s transition to vocalist was a gracious step towards stardom”

Having joined The Prodigy as a dancer, it took six years for Flint to take the ultimate step up to the mic alongside rapper Maxim. In 1996, Flint’s transition to vocalist was a gracious step towards stardom for the band who were gearing up to the release of third record The Fat of the Land.

The seminal 1997 release promoted Flint to the helm of a vastly expanding ship, pushing the British underground rave scene into the spotlight of world music. With an impressive array of singles, including Firestarter and Breathe, the album will forever be remembered as one of UK dance music’s most important recordings.

Firestarter captured the essence of British rave culture, selling more than 600,000 copies and knocking Take That off the top of the charts. Follow-up single Breathe once again hit the top of the UK charts and cemented Flint as the poster boy of a bewildered nation. Whilst both tracks managed to dodge the colossal barrier of Britpop, it was the visual aspect to The Prodigy that fans will remember Keith for the most.

The video for the iconic Firestarter hailed Flint as punk music’s new leader, with his confrontational stance and unconventional attire making him stick out like an aggressive sore thumb. The image of a devil-horned singer twitching and entranced in a seizure-like dance in an abandoned London Underground tunnel makes the video one of the most enduring memories of 1990s culture. Banned by the BBC after parents complained that it was scaring children, the head-banging, gurning frontman, was unapologetically antagonistic in his capacity as the band’s lyricist.

Embracing the menace and danger that had transfixed him throughout his childhood, Flint tore down the pristine platform laid by the Britpop era. He took dance music into a new realm. Encasing rave culture with the vehement spirit of punk, Flint shifted the perception of an entire genre from a happy-go-lucky LSD-infused psychedelic trip to one of snarling brutality. 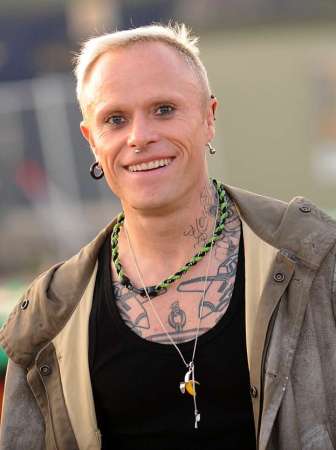 Flint’s confrontational demeanour however acted as a mere front for a man regarded as one of the kindest in the industry.

Somebody who knew what being an outsider in the music world really was, Flint was a calming presence on artists struggling to deal with unnecessary criticism like James Blunt. He had a gentle temperament, a personal kindness, politeness, and generosity that contrasted his aggressive stage and public profile. His often-secluded private life allowed him time to appreciate his standing in British music whilst also reflecting on some of Britain’s bigger issues.

For Flint, there were no such thing as boundaries. Walls were meant to be torn down and paradigms needed to be shifted. The Britpop bogeyman wasn’t content with how a predominantly Conservative Britain was holding younger generations hostage.

The working classes needed to be freed. Children needed hope. But firstly they needed a sense of belonging, a reason to live as you please, and through The Prodigy’s chasm of electronically charged dance music, a new community was born. Growing millennials, aghast with current society and needing a spokesman to help harness their frustration had finally found their leader.

Those who have seen Flint spearhead The Prodigy on stage know just how great a showman he truly was. His desire to infect every single member of the crowd with the same carnal lust for rhythm and rebellion never wavered during the band’s lengthy career. I was fortunate enough to witness Flint spearhead The Prodigy’s headline set at 2015’s Isle of Wight Festival, a show which stole the limelight from a returning Fleetwood Mac.

In fact, in recent years Flint and the band looked to be enjoying a resurgence in popularity. With the increasing disparity in Britain and America, The Prodigy’s final record, 2018’s No Tourists, was a call-to-arms for those confused millennials needing a pillar of strength to help them through constant political turmoil, and in 2019 The Prodigy were set to embark on a US tour in May and were also booked to return to Glastonbury.

Flint’s striking stage persona attracted vast attention, and his tendency for being an adrenaline junkie made him one of the industry’s most captivating figures. However, his happy-go-lucky, live fast motto made him vulnerable to the darker side of the music business. Having suffered from an addiction to prescription painkillers, Flint was always open about his long-standing battle with depression and once again we find ourselves looking around and realising that our music industry has lost another soul to the burgeoning issue of mental illness.

Last November, I wrote an article highlighting the worrying trend in suicides within the music industry. I spoke about Mac Miller, Chester Bennington, and Scott Hutchinson amongst others, and sincerely hoped that the trend would at least slow down. The news of Keith Flint’s death was truly a heartbreaking moment. Whilst I may not be the most avid follower of dance music, Flint had a gift when performing that millions of people across the world will now never get to see.

Keith Flint wasn’t the brains behind The Prodigy’s music, he was more the smirking glint in the corner of your eye, the crowned Prince of chaos leading the satanic sprawl of mosh pits and intoxicated bodies. Embellished with a childish glee when performing, he expanded The Prodigy’s appeal to those outside of the underground rave bubble. Fans of metal, rock, and grunge, alongside a mischievous rabble of teenage rebels, found solace in the band’s commanding maelstrom of feral, post-apocalyptic, drum and bass.

“Keith Flint was an icon and will rightfully be remembered so.”

He put a face to a genre defined by anonymity and his legacy will forever be carved in British culture. His death has left a sizeable void that might never be filled again, but as fans and general music lovers, we owe it to him to continue living the fast life, enjoying the thrills that may pass our way.

Great men can take years to make their mark on popular culture. Icons can do it almost immediately. Keith Flint was an icon and will rightfully be remembered so. Rest in peace legend.