Is Brexit tailored for the fashion industry?

Rowan investigates how Brexit has and will impact on the fashion industry. 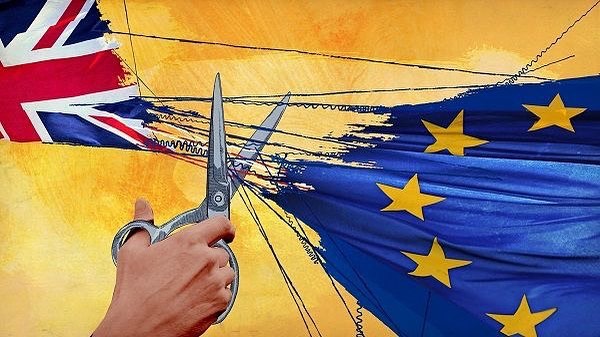 It is 2019 and February has been and gone in style. World Fashion Week kicked off in New York and took its pit-stop tour across European powerhouses Milan, Paris, and our own home turf, London. Year by year, the event drips with cash, fame, and impractical clothing, and is guaranteed to cause controversy—did you too struggle with the practicalities of Anna Hindmarch’s cloud-shaped ‘World’s Largest Beanbag’, lounged on by people in boiler suits?

Questionable trends aside, fashion (often considered shockingly frivolous and ignorant of real-life issues) has been hijacked as a political platform. Now a front row guest alongside the Beckhams, Alexa Chung, and the cast of Sex Education, is Brexit – as if Katharine Hamnett’s ‘CANCEL BREXIT’ T-shirts are not blatant enough. Hamnet is not alone in her sentiments: the British Fashion Council’s call for a second referendum is the new black. With the founder of Superdry having given £1 million to the People’s Vote campaign, what can we expect for the industry when we leave?

As the government flails around with plans for BREXIT it's becoming clear to all that it ought to be cancelled – or at the very least a second referendum called. . . The guys from @supamodelmanagement photographed by @williampine . . #CANCELBREXIT #SECONDREFERENDUMNOW #FASHIONHATESBREXIT #katharinehamnett #katharinehamnettlondon

A post shared by KATHARINE HAMNETT LONDON (@katharinehamnett) on Dec 3, 2018 at 9:33am PST

Let’s start with Brexit, a political movement as hotly debated as the bell-bottom flares trend. Theresa May has made it clear that preserving a customs union is off the table and a ‘soft’ Brexit with free trade is yet to have been reached through a deal. In other words, as the leaving date of March 29th stands, a no-deal Brexit could be next season’s style to watch.

Deal or no-deal, the fashion industry is a big deal, fronting a global enterprise that employs 890,000 in the UK and has an economic value of £32.3 billion. In terms of the economy, Brexit has already started to reshape the industry. The pound has crashed like double denim, leading to a swarm of Asian fashion tourists buying out high end London brands. However, this new development is balanced by falls in both spending on luxury goods and foreign investment.

“Brexit has already started to reshape the industry”

What’s more, in December, the Bank of England estimated that a no-deal Brexit would send UK shop prices up as much as 10%. This would largely be down to the introduction of tariffs on items imported from the EU to the UK. Among other models, a ‘Norway-style’ Brexit would avert these tariffs, with the UK making significant contributions to the EU budget in order to remain in the European Economic Area. While a hard Brexit would introduce tariffs of a grand 11% on finished clothes and shoes, it seems that tariffs on unfinished products could have the greatest impact. With an industry consisting mainly of small and medium sized enterprises that rely on cheap European imports of raw materials, tariffs would forecast a monumental increase in overall manufacturing costs.

The new black is over-accessorised by red tape—or to put it more specifically, ‘Brexit Red Tape’—the term applied to the tangle of extra rules that come with leaving the EU. These could include new VAT regulations that require upfront payments, growing port queues, and the barring of imports from British firms who do not meet new quality standards. From shipping in materials to transporting product lines into Europe, Brexit Red Tape will slow the industry down.

Products aside, there are concerns that the movement of people will begin to resemble a catwalk: slow and precarious. Tighter controls over European workers in the UK will lead to a drop in shop staff, factory labourers, delivery drivers, and designers, who are not only crucial to the mechanisms of the industry, but to its rich cultural diversity.

For the talent that is left, many designers may choose to move their firms to Europe to avoid red tape altogether. To top it off, there may be delays at immigration for foreign buyers and for models and designers during fashion weeks. With reduced connectivity with her powerhouse sisters Milan and Paris and the loss of free movement perhaps sending a message of exclusion which is contradictory to the values of fashion, Brexit could place London’s position as an international pillar of style under threat.

What could this all mean? Internationally: a fall in the competition of the industry. Locally: a drive up in the price of your jeans.

Yet despite fears that Brexit could be a case for the fashion police, the vote to leave has not stopped British fashion from going from strength to strength so far. The British Fashion Council has reported a 5.4% growth in the industry in the last year, larger than the average economic growth of the UK. Do we need to ask whether a global industry such as UK fashion is robust enough to withstand Brexit after all? With the falling profitability of trade with the EU there is increasing evidence of small-scale British suppliers and manufacturers flourishing under rising demand. This tentative growth in manufacturing implies that Leave’s promised ‘made in Britain’ movement is having success.

Amid fears of losing London as a global fashion capital, perhaps we should consider that even in fashion some things cannot go out of style. Consider the British firm N. Peal Cashmere, signed to dress James Bond in polo neck tops and £200 cashmere jumpers for international blockbusters Skyfall and Spectre—a contract that could only be filled by a British company. With another Bond film on the horizon and the established world-wide connections of brands such as Burberry and Alexander McQueen, it is clear to see that ‘quintessentially British’ is a global USP that Brexit may leave shaken, but not stirred.

Article Images courtesy of @katharinehamnett  and @burberry via Instagram.

Want to talk about Brexit? Or beauty and fashion in general? Pop us an email at lifestyle@impactnottingham.com

TV Review: Conversations with a Killer: The Ted Bundy Tapes