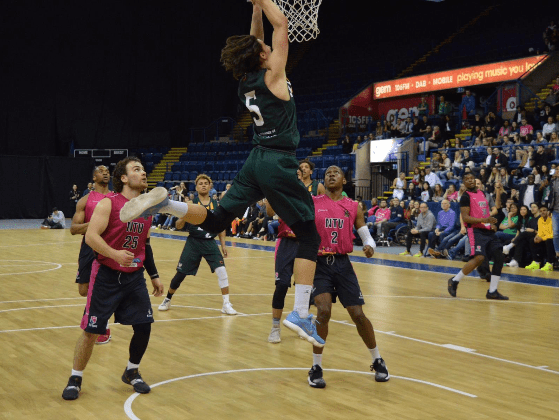 It was a mixed night for UoN on Friday at the Motorpoint Arena, as they split their Varsity basketball double header with cross-town rivals Nottingham Trent. The evening began positively as the women’s fixture saw an impressively comfortable 66-50 victory to avenge last year’s reverse, but the men’s side suffered a fourth consecutive varsity defeat as they were on the wrong end of a Trent comeback in an 81-73 loss.

In the women’s fixture, it was Trent who made the bright start. They made three of their first four shots to race out to an 8-0 lead in the opening minutes, as the green and gold struggled to find any shots of their own. UoN were able to stem some of the Trent tide in the minutes that followed, but they still faced a 16-7 deficit when they called the first time out of the game with 3 minutes remaining in the opening quarter.

After that, UoN began to get into their groove. Fifteen unanswered points in the final stages of the first quarter and opening moments of the second wiped out their disadvantage, with strong offensive rebounding key in turning the situation around. The teams began to score well in the middle of the quarter, with impressive showings from both sides of Nottingham from three-point range as both made 5 in the first half. That petered out in the closing stages, but it meant the green and golds took a 37-29 lead into the break.

“I think we did a great job, to be honest, because we came out a bit shaky but came back, showed fight, kept pushing, so I’m really pleased”

Neither side was able to make a fast start to the second half, with no points scored whatsoever until UoN made a lay-up two and a half minutes into the third quarter. Nottingham continued to do well to force second chance opportunities through turnovers and offensive rebounds in the third, but they struggled to take the chance to extend their lead much further for most of the second quarter.

However, Trent also failed to seize the initiative and reduce the arrears, meaning the green and gold still had a good amount of breathing space throughout the quarter. That meant that when two big three pointers went in for UoN midway through the quarter the lead was beginning to become insurmountable, reaching sixteen at its peak.

Both teams took time to warm up in the fourth, but the three baskets made by the Green and Gold were enough to extend the lead as the defending champions struggled to score at all in the first minutes. The final stages were just a case of closing the game out for Nottingham, and they were able to breathe easy having reclaimed their crown with a few minutes to go, finishing up with a 66-50 victory.

#NottsVarsity | Final score in Varsity Men’s Basketball 2019 NTU 81-73 UoN.
Congratulations to NTU who turned the game around in the 4th quarter. Thank you to all UoN supporters, you were amazing! #GreenAndGold pic.twitter.com/KlI29qdbKo

Speaking after the game, Ruthie Bentley praised the team’s efforts, saying “I think we did a great job, to be honest, because we came out a bit shaky but came back, showed fight, kept pushing, so I’m really pleased”, whilst MVP Leelee Tomlinson highlighted the contributions of the whole squad, commenting “I think we did really well as a team, we all executed and did everything coach asked us to do.”

It was then over to the men’s contest and both teams started out nervously. The opening minutes saw more turnovers than points between UoN and Trent, with eight of the former and seven of the latter as the green and gold led 5-2 before the 2018 winners called a time out. However, it was Nottingham that took the initiative when play resumed, going on a 13-3 run over the next minutes, whilst Trent had to wait until the final forty-five seconds of the quarter to make their first field goal of the contest.

NTU took some momentum from that improvement at the end of the quarter and cut the lead to seven when they scored with the first shot of the second period. Nottingham were able to maintain the gap in the minutes that followed, until a defensive lapse in concentration caused head coach Minduagas Janiska to call a timeout with 4:32 remaining.

“a game of runs, one team can get hot and the other can respond or not respond and I don’t think we responded very well today”

The game got scrappier and scrappier in the minutes that followed, with neither side able to make a shot from the floor or the foul line, and some controversial foul calls getting the crowd into the game. Once the game regained some structure in the last few minutes of the second quarter, it was the Green and Gold that benefited, as Josh Smith had the UoN faithful on their feet with some outrageous skills that allowed them to weather the Trent fightback. With that, they led 38-30 at half-time.

The second half began in the same vein for UoN, as the side kept up a healthy lead in the high single digits in the preliminary stages. But in the stages that followed, they began to lose control of the contest. A steady run of points cut the Green and Gold advantage to four, before they reasserted control briefly and went ahead by nine. Trent seized the moment in the last minutes of the quarter however, making crucial shots and taking advantage of Nottingham’s ill-discipline to make hay at the foul line, exciting the fans in pink and giving their side a 55-51 lead with 10 minutes to play.

The green and gold managed to regain some composure at the start of the final quarter, taking chances at the line to level the game up at 57-57 with less than two minutes to play. The next three minutes saw some of the best basketball of the evening, as the sides traded shots in a phase of play that saw UoN take a three point lead, before Trent regained their stranglehold and went up by four before the latest timeout.

“I’ve got to give a huge shoutout to everyone that came down, this is one of the coolest atmospheres I’ve ever played in.”

The game drifted into a pattern of turnovers and fouls following that pause and made the mountain the green and golds had to climb that little bit taller. UoN couldn’t get any closer than four points in the final stages despite raucous support from the stands, and with that, it was a fourth consecutive varsity defeat for the green and gold.

Speaking after the game, Mitch Eighme described the match as “a game of runs, one team can get hot and the other can respond or not respond and I don’t think we responded very well today”, whilst saying that the team “have to learn to close games out and not get comfortable.” He also praised the support of the green and gold faithful, saying “I’ve got to give a huge shoutout to everyone that came down, this is one of the coolest atmospheres I’ve ever played in.”

In summary, Friday was a mixed night for UoN, with the highs of an impressive win for the women’s outfit matched by the lows of a disappointing defeat for their counterparts on the men’s team. It also leaves the Varsity series finely poised at two points apiece, with the series continuing at the ‘Super Sunday’ events at David Ross this weekend.