The University of Nottingham played out a thrilling match against top of the league University of Warwick and Kenilworth squash team in the PSL league on Tuesday. Despite losing the match 1-4, the quality of squash on show certainly did not disappoint.

Lewis Walters kicked things off against Nick Wall. After winning the first game 11-9 things looked positive for the green and golds. However, the second game was won comfortably by Nick Wall, 3-11. The third game went right down to the wire, and provided a fantastic competitive encounter, with both players showing energy and determination. Despite some on-court disputes and some controversial umpiring decisions, the game fell to Nick Wall 14-16.

‘The 22 year old Pajares produced a sublime performance to beat Matthew, and showed his promise as an up and coming squash player.’

The second match between Coline Aumard and Sarah Jane-Perry was another heavily contested match. Aumard showed her technical quality, but lost the first game 8-11 after some costly mistakes. However, her quality combined with more consistency showed in her second game, winning comfortably 11-4. This meant again it came down to the third and final game to see who would clinch the win. Sadly, Aumard could not repeat her form in the second game, losing 4-11.

This left the match down to Adam Auckland to revitalise UoN’s chance of claiming a win against Warwick’s Daniel Mekbib. Despite a positive start, it clearly wasn’t to be for the University of Nottingham, as Auckland lost the first game 9-11 and the second 6-11. 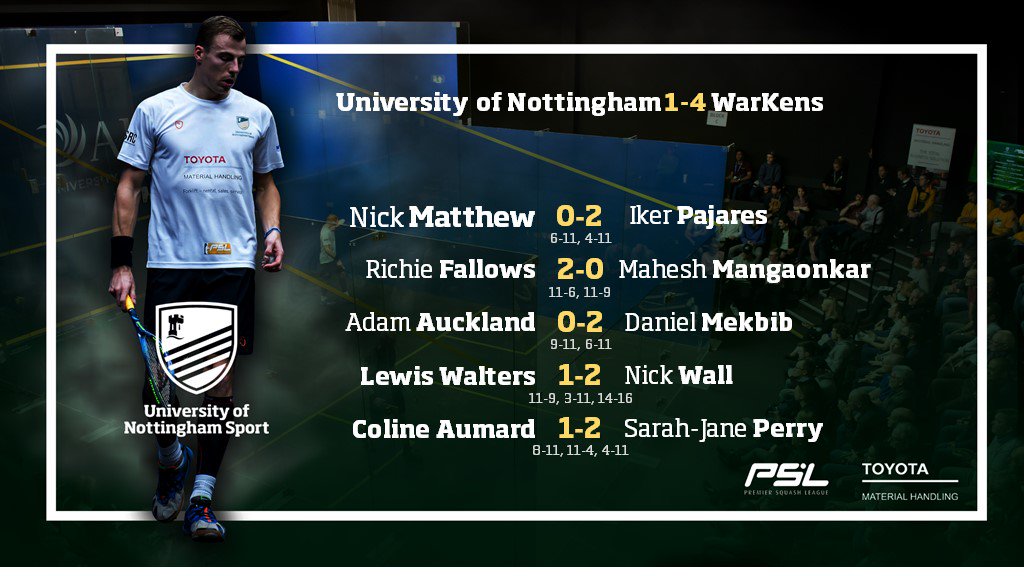 In the fourth game Richie Fallows did gather a game back for the green and golds, winning 11-6 and 11-9 against Mahesh Mangaonkar, but it was too little too late against a very tough Warken side.

The final game between Nottingham’s ex-world number 1 Nick Matthew and Iker Pajares followed the same course as most of the previous games. The 22 year old Pajares produced a sublime performance to beat Matthew, and showed his promise as an up and coming squash player. The scores were 6-11 and 4-11.

It wasn’t to be for the University of Nottingham’s PSL squash team, and they now sit 4th in the Northern Division table, whilst Warwick and Kenilworth almost guaranteed their place in the semi-finals.

What your degree says about your fashion sense

March Book of the Month: The Perks of Being A Wallflower