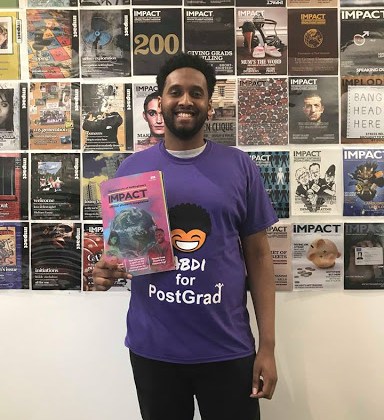 Abdi Ahmed has been elected as your new Students’ Union Postgraduate Officer for 2019/20.

Abdi was declared the Postgraduate Officer for the 2019/20 academic year after winning the 5th round of voting, with 1684 votes.

When speaking to Impact, Abdi said that he was ‘ecstatic, absolutely thrilled, nervous, emotional but most of all, absolutely flattered by how everything’s gone.’

When asked what the highlight of the campaign process has been, Abdi expressed that ‘being able to work with an amazing group of people, who aren’t only your friends, but genuinely believe [in] the changes which you are making’, has been the greatest highlight.

Abdi told Impact that the biggest challenge during the campaigning process was ‘getting everything together and actually looking after my wellbeing.’

Asked what his celebratory plans are going to be, Abdi said that he will be eating some Kinder Buenos and getting some well-deserved sleep.

Abdi wanted to thank his team ‘for keeping me level headed and reminding me of the bigger picture, and just being there for me day in and day out.’

He ended the interview by saying that ‘this is not a win for Abdi but a win for the entirety of my team and those who believed in my manifesto and voted for me.’