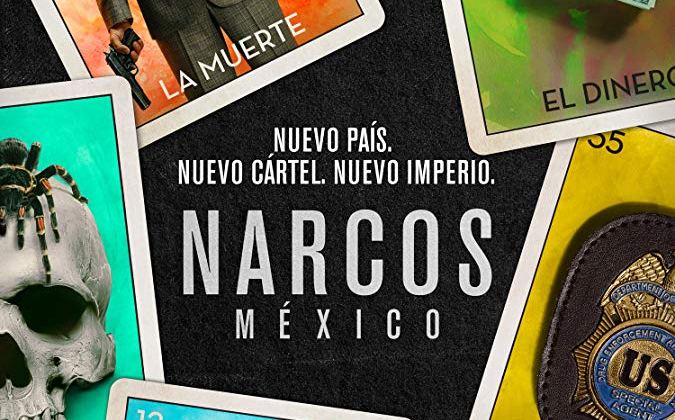 Narcos: Mexico follows the hugely successful first three seasons of Narcos. Shifting its focus from the Sinaloa and Cali Cartels in Colombia, Narcos: Mexico spotlights the gestation of the Guadalaraja cartel in Mexico, the political machinations of key players and the corrupted socio-political fabric that is dominated by drugs and money.

Narcos: Mexico is driven by an array of superb performances but none more so than Diego Luna’s charismatic Felix Gallardo and Michael Pena’s portrayal of the tireless and courageous DEA agent Kiki Camarena. As Narcos: Mexico threads a fine line between binge-worthy entertainment and sticking to the spirit of true events, it is mostly successful in capturing the seedy underbelly of the drug trade in Mexico during Guadalaraja’s rise and the key players during this tumultuous period.

Two threads run concurrently to produce a nervy, exhilarating and sobering experience. The first narrative thread focused on Felix Gallardo’s rise in the drug trade. Starting off as a police agent, Gallardo’s shrewd manoeuvres and bold decision-making throughout the series highlights a character that stands out among the many. Diego Luna’s portrayal of a man rising beyond challenges and crises portrays an almost clinical and cool figure in an industry dominated by rash and loud personalities.

“Between the geopolitical warfare and collusion that act as overarching realities, Narcos: Mexico’s strongest scenes are derived from strong characterization and dialogue”

Behind the scenes, DEA agent Kiki Camarena is unwavering in his mission to bring the Guadalaraja cartel down. In an interview, Michael Pena said he wanted to really capture the essence of the man. While he is most notable for his comedic roles, Pena has successfully portrayed the larger-than-life figure by embodying the tireless and uncompromising work and ethic of the man himself. Between the geopolitical warfare and collusion that act as overarching realities, Narcos: Mexico’s strongest scenes are derived from strong characterisation and dialogue.

“While much of it is orchestrated to be entertaining, the reality of the cartel trade itself is the very embodiment of extravagance and sensationalism”

While it doesn’t fully capture the devastating realities of the drug trade on a wider social and national narrative, Narcos: Mexico’s focus on the high profile stakeholders and players in the industry offer a humanising aspect to the lives of shadowy and fabled figures. While much of it is orchestrated to be entertaining, the reality of the cartel trade itself is the very embodiment of extravagance and sensationalism. At times, it even seems like what we see onscreen is unable to fully capture the excess and incredulous nature of its events. Overall, the show is a strong follow-up to the first three seasons – with strong direction and acting, Narcos: Mexico carves new territory in the storied depictions of drug cartels.