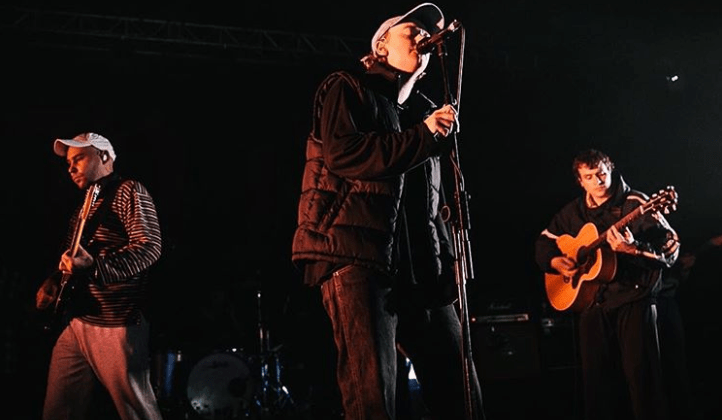 Impact sat down with DMA’s’ guitarist, Johnny Took, right before the band’s sold out show at Rock City. We discussed hangovers, the meaning of success, and what’s next for the band.

You guys played Liverpool last night, how was that?

JT: Errrrrrm… it was great.

You had to think about that a bit?

So, it’s your second to last night, how are you feeling about it ending? Are you looking forward to a rest?

JT:  Well we don’t really get a rest. We go straight back to Australia for a festival called Bad Friday (on Good Friday) in the area we grew up (western Sydney) and then we do another festival called Grooving the Moo which is all rural towns, which is really cool because we get to see parts of Australia we wouldn’t normally see.

“We’re back and forth constantly.”

So when will we see you again?

JT: Well pretty much straight after that we come back to the U.K and do Isle of Wight Festival, and Heaton Park with Courteeners, then we play a castle in Ireland with Noel Gallagher and our own show in Belfast. We’re back and forth constantly.

That must be tiring, that flight is intense!

“Happy and healthy. That’s success for me.”

Can you not book a holiday?

JT: I’d like to, stop off in Singapore or something, but we’re always in a rush. It’s worth it though.

Do you notice a difference in crowds when you play in different cities / countries?

JT: I guess the U.K crowds are pretty particular. I’m not promoting it at all, but there’s a lot of flares indoors which is fucking crazy. That just wouldn’t happen in Australia. The shows are pretty fucking rowdy these days. Which is good… so long as everyone’s safe, I’m down with it.

What’s your favourite song to perform?

JT: Probably ‘The End’. We do an acoustic version of it live. Last night when we played in Liverpool, I took out my in-ear monitors for that song, and the crowd was fucking loud and it was really special, just acoustic guitar, piano, and a whole bunch of crazy motherfuckers.

Did any of you guys go to Uni?

JT: Tommy went to uni. I think he studied arts. I did a music production course which was meant to be degree level, but I dropped out after the first year.

Do you think it’s worth studying music if you want to perform or is it best to jump right in and do it?

JT: Both. You just have to do every single bit of everything as much as you can. Because it all links. And the more you know about anything, in any situation, the better.

The next issue of Impact is about success. How do you define it?

JT: I’m all about the simple life these days. It’s less about feeling successful and more about feeling satisfied. I felt most content recently living in Edinburgh with my girlfriend and spending nights on the couch eating curry and watching TV.

I bet you’d love that now in your hungover state…

JT: Exactly! I’d sit there going ahh this is great… and that’s when you know you’ve made it. Happy and healthy. That’s success for me.

When did you start to feel successful as a band?

JT:  With everything that’s happened in our journey so far its felt quite organic, and I think what some bands can do is go through the motions of it and forget to celebrate little things. If you’re constantly thinking about the next thing then you never feel like you achieve anything. So celebrate the little things.

Selling out these gigs and stuff is mad and you do have to take a moment, otherwise you will live your whole life not appreciating it. You know what, I’ve seen a lot of bands that have been really big and then something’s happened or they’ve faded out, and it’s easy to take it for granted when you’re ‘going good’.

So what’s coming up in the future, is there a new album on the horizon?

JT: Yeah definitely. We’ve got a couple new songs we’re working on, and there’ll definitely be an album out sometime soon.